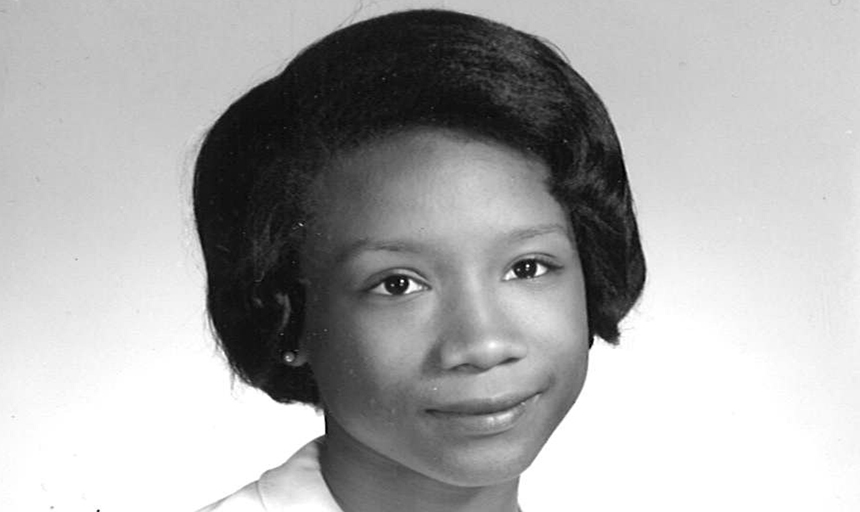 The news appeared in the Roanoke Collegian, Summer 1964 edition, below an article about a biology professor who’d won a National Science Foundation grant to study in Antarctica.

“First Negro student admitted for Fall,” the headline read. Below it, a four-paragraph story, no photo:

Virginia Maxine Fitzgerald of Vinton, who ranked first in her graduating class at Carver High School in Salem this year, has been accepted as the first full-time Negro student to enroll at Roanoke College.

She intends to major in biology and will begin classes in September as a day student.

And quietly, history was made at Roanoke College—the same year as the signing of the U.S. Civil Rights Act and a year before the signing of the Higher Education Act of 1965, which aimed to strengthen the educational resources of the nation’s colleges and universities.

Fitzgerald’s enrollment at Roanoke came during a national era marked by the gradual opening of higher education doors to African Americans. She was among the first African Americans to enroll at a private college in Virginia.

Fitzgerald “is so qualified…meeting all our standards,” then newly inaugurated Roanoke College President Dr. Perry F. Kendig told The Roanoke Times. “I knew it was inevitable when I became president, although I didn’t know when it might happen.”

Fitzgerald entered Roanoke College unceremoniously, absent the great tumult of college and university integration that occurred deeper south. There were no cameras rolling on Sept. 13, 1964, no shouting mobs, no riots.

Fitzgerald’s acceptance into Roanoke certainly was no secret. The Roanoke Times had come to the Vinton, Virginia house where she, her parents and three siblings lived, to interview the 18-year-old, would-be history-maker. “College May Get Full-Time Negro Student,” the headline of the April 29, 1964 article read.

The historical significance was not lost on Fitzgerald but was almost secondary to her educational pursuits. She was a bright, driven young woman with a desire to further her education—and to do so close to home. Valedictorian of the G.W. Carver High School Class of 1964, Fitzgerald was one of five African-American students to apply to Roanoke.

She was the only one accepted.

Fitzgerald had been offered a scholarship to Bennett College in Greensboro, N.C. and had been accepted to Virginia State College (now Virginia State University)—both among the family of Historically Black Colleges and Universities. But Roanoke College was her “first choice,” she told The Roanoke Times in 1964, because it offered some courses not available at other schools.

“I want to major in biology,” she told the newspaper, and said she hoped to “teach a few years” after graduation from college then return to school and become a psychologist.

“Roanoke College had everything to do with who I am today.”

Bernice Gaither guides her sister, Virginia Maxine Fitzgerald ’69, to a couch in the living room of Gaither’s Roanoke home. Gaither is caretaker now of her older sister, whose mobility and speech were impaired by a debilitating stroke in 1995.

Gaither speaks proudly of Fitzgerald, who was the first of the family of six—mother, father and four children—to attend college. She proudly remarks how her sister “took college courses while she was still at Carver” and could “make an A on an exam even when she didn’t study.”

Fitzgerald settles into the couch in preparation for questions from an interviewer, Olivia Kitt ’20, president of the Roanoke College Student Government Association, only the second black student elected to the position.

As a video camera records, Fitzgerald responds to a series of questions, struggling at times for words. Gaither assists—correcting, reminding, filling in forgotten details.

And then, the words tumble.

“Roanoke College had everything to do with who I am today,” Fitzgerald tells Kitt.

She recalls a pleasant arrival on campus in 1964. “People were so friendly,” she remembers. “That meant a lot to me.”

Fitzgerald was a commuter student, choosing to live at home rather than on campus. (“She had the option to stay on campus, and had she wanted to, but Maxine was a homebody,” her sister says.)  She was a member of the Women’s Athletic Association and the Roanoke College Choir, serving at one time as its vice president. She worked in the bookstore.

A psychology major, she was a participant in Upward Bound, a national, federally-funded program that aims, to this day, to provide certain categories of high school students with better opportunities to attend college.

At Roanoke, she appreciated the small class size and nurturing environment. There was no racially-tinged trouble, she says, but remembers one occasion when a professor told her “he wasn’t sure what kind of blood ran through black people’s veins.”

She left Roanoke in the 1965-66 academic year, taking a gap year and moving to Philadelphia to work. The yearlong break was, in part, for financial reasons “in that our parents were not able to pay out of pocket and it was even harder to obtain loans,” her sister says.

Fitzgerald returned in the 1966-67 academic year, determined to graduate. She completed her course work and in 1969, graduated with a bachelor’s degree in psychology.

She went on to earn a master’s degree in clinical psychology from Radford College (now Radford University). For 29 years, she worked as a psychology technician at the Veterans Administration Medical in Salem before retiring in 1995.

Now 73, Fitzgerald doesn’t dwell on the history-making nature of her years at Roanoke but acknowledges its door-opening impact on the generations of students who followed in her path.

“I was inspired by [Fitzgerald’s] story and the love that she was able to express as she spoke of her time being a part of the Roanoke College community,” says Kitt, a political science major with a concentration in legal studies. “This is a community that was welcoming and supportive 50 years ago, and that testament still holds true today.”

Fitzgerald, Kitt says, “paved the way for African-American students like myself, so we could immerse ourselves in the opportunities and experiences that Roanoke College provides.”

Ken Belton ’81 a member of the Roanoke College Board of Trustees who has been instrumental in developing diversity initiatives at the College, calls Fitzgerald “a true, outstanding pioneer of the times.”

Fitzgerald “stood up and stood out in an era where there was segregation and desegregation,” Belton says. “Her courage and determination have created much opportunity for many African Americans and other minority student enrollment.”

“As Roanoke College continues its mission to develop the whole person, we elevate the diversity and inclusion of all students.”

To view a video about Maxine Fitzgerald, visit roanoke.edu/maxinefitzgerald