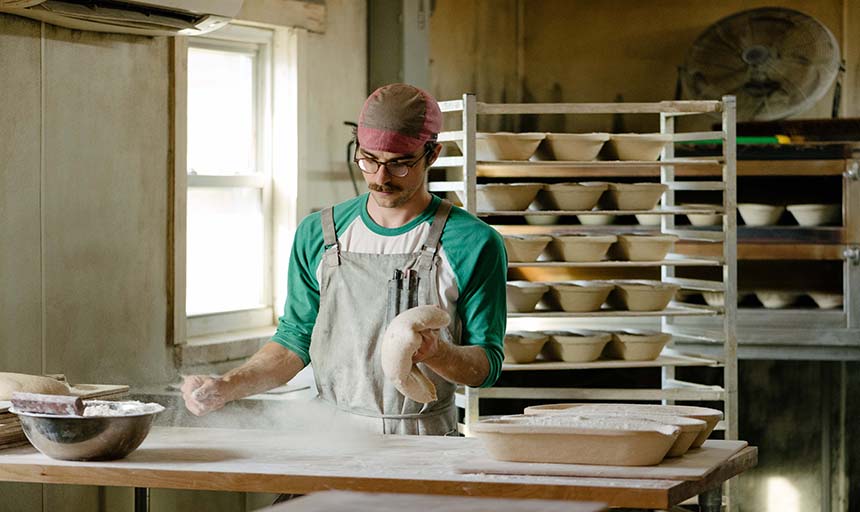 Joe Shea '09, at work in his bread bakery, Tiller Baking Co., which he opened in Charleston, South Carolina in 2018. Photo courtesy of Joe Shea.

From seed to feed

Joe Shea ’09 has a particular fondness for the simplicity of bread, its elemental ingredients, and what he once referred to as the “quotidian” nature of baking it.

“It’s kind of a process of constant refinement without ever achieving a level of perfection,” says Shea. “I like doing the work. It always engages me.”

Bread-baking has been Shea’s joy and profession for the past 10 years — in Telluride, Colorado, in Oakland, California and now, in Charleston, South Carolina, where he opened Tiller Baking Co. in 2018.

Located in the Red Top area on the far western edge of Charleston, Tiller Baking’s specialty is handcrafted hearth loaves made with fresh-milled whole grains. To say the breads are works of art is no exaggeration. The crusty loaves are enhanced by braided edges, petal-shaped carvings and unique shapes.

What sets this artisan bread apart from others are ingredients and process, says Shea. Tiller Baking works with local quality, organic ingredients, milling 20% of the flour used. Most of the breads are sourdough; its most popular is a classic baguette and a rich, creamy, sweet loaf that incorporates grits and cornmeal. (“It tastes like a corn flake,” Shea says.)

Tiler Baking’s use of the freshest local ingredients hearkens back to Shea’s years at Roanoke College, where he majored in philosophy and minored in environmental science.

Shea, an Alabama native, spent the summer between his junior and senior years as a Summer Scholar, a competitive program at Roanoke College in which students work one-on-one with faculty on a research project. Shea’s project, titled "Topology of Sustainability: A Dynamic Approach to Agricultural Systems,” was with Dr. Brent Adkins, professor of philosophy.

Dr. Adkins, who was also Shea’s advisor during the regular school year, would share homemade bread with his students from time to time, Shea recalls. Adkins invited his 2008-09 Advanced Seminar students, including Shea, to his house for an end-of-term celebration, where they baked bread, made pasta and enjoyed the food together.

“Bread is super simple, only three or four ingredients. The process averages about 36 hours from initial starter to fully baked loaf — 36 hours from seed to feed”

For Shea, who'd worked at local restaurants and coffee houses during his years at Roanoke, "bread was a new thing for me."

Dr. Adkins also says he occasionally would invite students over for an all-day cooking event.

“I think in Joe’s case this meant pizza in a wood-burning oven for lunch, and homemade cappelletti, slow-roasted goat, and focaccia for dinner. It was a great time hanging out and cooking together,” Adkins recalls. “It never occurred to me that a student would take such an interest in cooking that he would make a career out of it.”

But that experience, coupled with Shea’s field of study, was “definitely an influence,” Shea says. “The foundation was laid in the kind of study work I did at the College. And after thinking theoretically about things, I wanted to spend time learning a skill, a practical skill doing something concrete,” he adds.

How funny, Shea muses, that his work now is tied to “that historical agricultural metaphor” from years ago.

In 2009, Shea moved to Colorado, where he baked bread and pastry in Telluride. Two years later, he moved to San Francisco, where he completed course work at the San Francisco Baking Institute and worked at a wood-fired bakery in Oakland. After marrying, Shea and his wife, Charlotte, ventured back east to Charleston, where Shea managed a restaurant bakery, then worked as head baker at a bakery that specialized in honoring the baking traditions of time and craft.

When the owners decided to move to Atlanta, Shea purchased the business and opened Tiller Baking, where he is continuing the baking traditions and skills he’s honed over the years.

Tiller baking’s five employees include his brother-in-law, who is head baker. Shea’s wife and their two children — Jacob, 3, and 1-year-old Zoe — can be found at the bakery too, on occasion.

In May, Tiller Baking was featured in City Paper, a Charleston weekly newspaper. The writer borrowed a quote from the late iconic chef Julia Child in describing the bakery’s deep affinity for artisan breads made of fresh-milled whole grains: “How can a nation be great if its bread tastes like Kleenex?”

“I wrote the writer a letter and thanked him for the quote,” Shea says. “I’m definitely going to keep it in my back pocket.”