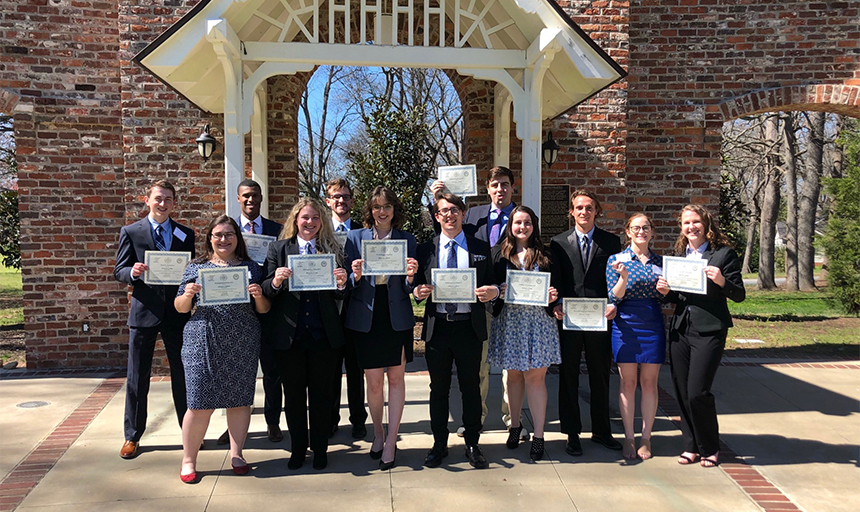 Roanoke College students have participated in three diplomatic conferences in recent months, winning awards in each on regional and national levels.

It was the first time in 23 years that the College’s Model UN delegation received recognition at the NMUN-NY, which draws participants from more than 130 UN Member States to address current global issues. The Roanoke College UN delegation—one of the smallest of the delegations from 200 schools and universities present—received the award for their representation of the State of Palestine.

Mia Petrucci ’20 and Tim Shay ’19, won the Outstanding Delegation award in Environmental Affairs for their representation of Palestine. This was Roanoke College’s first time participating in NUMAL, held annually in D.C., this year at the Georgetown University Hotel and Conference Center.

NUMAL, which started as an informal demonstration simulation at Georgetown University in 1983, has grown to host over 400 students from approximately 25 colleges and universities. Delegates train year-round through mock simulations, course-structured research, and participation in regional Modern Arab League conferences to prepare for this highly competitive international simulation.

Roanoke College’s delegation represented Qatar at SERMAL. The delegation won second overall and won an award in every category—a first for the College. In addition to the awards Petrucci and Shay received, individual and group awards went to:

The delegation, as a group, received the overall Distinguished Delegation award for their representation of Qatar.

The Model Arab League and Model UN League offer students the ability to research deeply into the politics of the Middle East, to meet with like-minded students, to hear from diplomats and scholars, hone their professional and leadership skills, and travel to the region. In addition, the league is focused on competing on behalf of Roanoke College and making the school proud.

“They absolutely did that,” said Dr. Robert Willingham, associate professor of history who, with Dr. Joshua Rubongoya, professor of public affairs, serve as league advisors.