Spring 2021: COVID-19 Information and Planning
Get the latest information 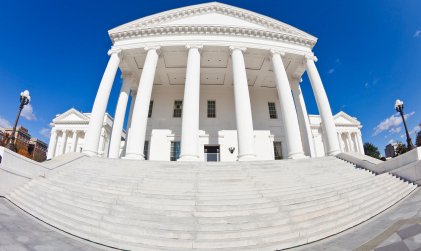 Republican challenger Ed Gillespie has narrowed the gap, but Virginia Democratic Senator Mark Warner still holds a 13-point lead (45%-32%) in the Virginia race for U.S. Senate, according to the Roanoke College Poll. Libertarian Robert Sarvis polled at 3 percent.[1] In the generic Congressional ballot, Republicans now hold an insignificant lead over Democrats (41%-39%).  The Roanoke College Poll interviewed 738 likely voters in Virginia between October 20 and October 25 and has a margin of error of +3.6 percent.

Candidate support is pretty firm with 81 percent of Gillespie supporters saying they are very certain they will vote for him and 77 percent of Warner supporters saying they are very certain of their choice. Likely voters are not enamored of either political party. Many of them hold unfavorable views of both the Democrats (47% unfavorable, 33% favorable) and the Republicans (46% unfavorable, 28% favorable).

Who is (or claims to be) undecided?

At this point in a campaign, it is reasonable to analyze undecided voters--if they are truly undecided or merely unwilling to share their choice, or if they will actually vote. Women, younger voters, and nonwhites are disproportionately represented among the undecided. The undecided split between Obama and Romney (35%-35%) in 2012 (79% voted in 2012), but slightly favored Cuccinelli over McAuliffe by 37%-31% in 2013 (54% voted in 2013).

They are more likely to be Republican or Independent and prefer the Republican candidate for the House of Representatives. They are more pessimistic about the country and the state, and their approval and favorable ratings are lower for all elected officials and candidates.

As is typical, a plurality of respondents named an economic issue as the most important problem facing the country (22% said the economy; 13% named unemployment or jobs; and 9% said the budget or taxes). Health care (9%), leadership/gridlock (6%), and education (5%) are also areas of concern for Virginians.

Most likely voters in Virginia are not focused on the events surrounding the resignation of former Senator Phillip Puckett. Nearly half (45%) have not been following the story at all (only 6% said they have been following it very closely and 18% said somewhat closely).

Among those who are following the story at least somewhat closely, higher percentages think that Kilgore (56%) and Reagan (63%) did something wrong and that other Republicans (53%) and McAuliffe (47%) knew about it. Nearly half (45%) of those following the story think that Warner did something wrong, but still two-thirds (66%) of them say it won't impact their vote (23% said it made them less likely to vote for Warner, but among those following the story, no Republican said they would vote for Warner, and no Democrat said they would vote for Gillespie).

Less than half (45%) of respondents believe the Centers for Disease Control and Prevention's statement that the Ebola virus can only be spread by coming in contact with bodily fluids (31% do not believe it and 24% are unsure). More than half (58%) are at least somewhat concerned that there will be a major outbreak of Ebola in the Unites States, and 41% are at least somewhat concerned that someone in their family will contract the disease. Despite those concerns, nearly half (48%) think that President Obama is doing enough to fight the spread of the disease (39% think he is not doing enough).

A larger percentage (80%) of those polled are somewhat or very concerned that ISIS will stage an attack or killing in the U.S. (53% are very concerned), and about the same percent (83%) think that ISIS will become a serious threat throughout the world. Only 38 percent of respondents think that the President is doing enough to stop ISIS, while 47 percent think he is not doing enough.

Views on the country and the commonwealth, elected officials

President Barack Obama's job approval has dropped to 32 percent, the lowest seen in the Roanoke College Poll. The 54 percent disapproval is also an all-time high. Congressional approval is up slightly to a dismal 11 percent.

Virginians' views of the country have been essentially stagnant since the July 2014 Roanoke College Poll, the most pessimistic in over two years. Only 22 percent think the country is headed in the right direction, while 67 percent said it is on the wrong track.

Mark Warner remains the favorite elected official (and candidate) in the Commonwealth with a 51 percent favorable rating (down 7 points in a month). He is followed by Governor Terry McAuliffe (37%), Senator Tim Kaine (37%), and Obama (37%). Republican Senate candidate Ed Gillespie's favorable rating has improved to 28 percent (26% unfavorable), but 35 percent still do not know him well enough to have an opinion. Libertarian candidate Robert Sarvis remains largely unknown, with 71 percent not knowing enough about him to have an opinion, but he is more likely to be viewed unfavorably (14%) than favorably (7%).

For the first time in the Roanoke College Poll, voters are more likely to be pessimistic than optimistic regarding the state of the Commonwealth (41% right direction, 45% wrong track). At the same time, Governor McAuliffe's job approval has declined to 41 percent, with 26% disapproving.

"Gillespie has narrowed Warner's lead, but he needs to pick up more momentum," said Dr. Harry Wilson, director of the Institute for Policy and Opinion Research. "Reports of Warner's phone call to Phil Puckett's son have not hurt as much as they might have...even among those relatively few Virginians who are paying attention to the story. It is the most partisan citizens who are following the story closely, and their positions are not likely to be swayed," Wilson said. "Likely voters are disgruntled. Favorable ratings are down for everyone except Gillespie, who was previously very low. Evaluations of the situation in the state and the country are also quite low while concern about Ebola and ISIS are relatively high."

Interviewing for The Roanoke College Poll was conducted by The Institute for Policy and Opinion Research at Roanoke College in Salem, Va. between October 20 and October 25, 2014. A total of 738 likely voters in Virginia were interviewed.  The sample included both land lines and cell phones and was created so that all cell phone and residential telephone numbers, including unlisted numbers, had a known chance of inclusion. Cell phones constituted 39 percent of the completed interviews.

Questions answered by the entire sample of 738 likely voters are subject to a sampling error of plus or minus approximately 3.6 percent at the 95 percent level of confidence. This means that in 95 out of 100 samples like the one used here, the results obtained should be no more than 3.6 percentage points above or below the figure that would be obtained by interviewing all likely voters in Virginia who have a home telephone or a cell phone. The margin of error is larger for any subsets of the 630 total.

Quotas were used to ensure that different regions of the Commonwealth were proportionately represented. The data were statistically weighted for region, gender, race, and age using the 2013 state exit poll as a benchmark. IPOR does not weight for political party.

A copy of the topline questionnaire and all frequencies may be found on the Roanoke College web site.

[1] Including those who are "leaning" toward a candidate, the results are: Warner-47%, Gillespie-35%, Sarvis-4%, and 15% undecided or someone else. Employing a stricter likely voter "screen" narrows Warner's lead minimally. Looking only at those who said they are likely to vote in 2014 and who voted in 2012 and 2013, the margin for Warner over Gillespie and Sarvis is 47%-37%-3% (N=459). Including those who are "leaning" in each candidate's support among strictly screened voters results in totals of 49%-39%-3%.