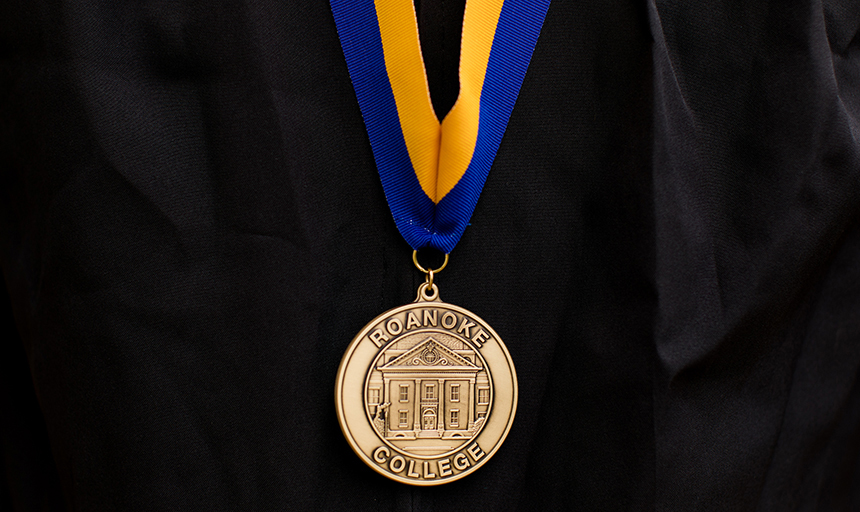 Roanoke College recognized 13 retiring faculty members during Commencement ceremonies for the classes of 2020 and 2021, held May 22 and May 29.

The 13 faculty members, who are profiled in brief below, represent a combined 422 years of service to the College.

Dr. Mark Miller – Professor of History and David F. Bittle College Historian. Dr. Miller joined the Roanoke College faculty in 1979. Miller, who has taught generations of Roanoke students about Colonial America, American military history and the early American Republic, is the author of “Dear Old Roanoke,” a history of Roanoke College. His popular ‘Board Talks’ – informal lectures delivered during Board of Trustees meetings – have been compiled into a book of little-known anecdotes about the College’s past. His devotion to international study has included years of service to the Virginia Program at Oxford and five years as the College’s Off-Campus Studies Director. Miller’s awards from the College include Outstanding Advisor in 1990 and four Professor of the Year awards from 1980-1986.

Dr. Lisa Warren – Associate Professor of Theatre. Dr. Warren began her career at Roanoke College in 1985, filling the first tenure-track position in theatre and becoming the College’s first Ph.D. hire in theatre. During her tenure, Warren has directed, at minimum, 75 plays and made costumes for student actors in 25 College productions. In the early 1990s she developed a London travel course, taking numerous Roanoke College students abroad to experience plays and historical sites. Her accomplishments include serving as an adjudicator for the Kennedy Center American College Theatre Festival and twice receiving the Kennedy Center American College Theatre Festival Meritorious Achievement Award for Excellence in State Direction.

Dr. Harry Wilson – Professor of Political Science; Senior Political Analyst and Director of the Roanoke College Institute for Policy and Opinion Research. Dr. Wilson joined the Roanoke College faculty in 1986 as a professor of political science. During his more than 30 years as director of IPOR, Wilson brought the program into the digital age and developed a national reputation for IPOR. He is credited with initiating IPOR’s regularly-scheduled surveys of Virginia on consumer sentiment, developing a political anxiety index to measure Virginians’ feelings about politics in the state and moving IPOR from only conducting and reporting on surveys to one that studies survey methodologies and presents on its findings at national conferences.

Dr. Garry Fleming – Professor of Economics. Dr. Fleming, who came to Roanoke College in 1987 and taught 13 different courses in the economics curriculum, received the Dean’s Exemplary Teaching Award in 2003-04 academic year. He served as president of the Virginia Association of Economists in 2000-01 and for eight years, edited the association’s Virginia Economic Journal. In 2014, Fleming opened Scrambled, a restaurant on the Historic Roanoke City Market, with his wife, Susan.

Dr. Katherine Hoffman – Professor of English. Dr. Hoffman joined the Roanoke College faculty in 1989. Dr. Hoffman, who served as chair of the English department and as faculty moderator, taught a broad range of courses in literature, civilization and general education.  She started the Learning Community on Teaching, which became what is now the Goode-Pasfield Center for Learning and Teaching. In 2006-07, Hoffman received a Fulbright Scholar award to study in Sri Lanka. In 2011, she was among a select group of Fulbright Scholars to participate in a then-new program known as the Fulbright Ambassador Program.

Dr. Christina McCart – Professor of Business Administration. Dr. McCart came to Roanoke in 1990, after one year as an assistant professor at Radford University. She served as chair of the Roanoke College Business Administration department from 2010-2013. She served as faculty moderator and chair of Faculty Affairs Committee in 2009-10. Throughout her career, she has also been involved in service to the profession – most recently as Vice President – Finance for Decision Sciences Institute. She was the first chair of the Roanoke College Innovation Challenge. She served as faculty advisor to Alpha Kappa Psi for 18 years.

Dr. Virginia Stewart – Associate Professor of English. Dr. Stewart, who joined the Roanoke College faculty in 1990, made signification contributions to Roanoke College though her devotion to the classroom, whether within four walls or abroad with May Term travel courses. Stewart, who received the Faculty Exemplary Teaching Award in 2012-13 academic year, served as assistant chair of the English and communication studies department and on a variety of faculty committees and student groups.

Dr. Mary Camac – Associate Professor of Psychology. Dr. Camac joined Roanoke College’s psychology department in 1992. She dedicated herself to a program of research that focused on scientific reasoning and students’ perceptions of psychology as a science, an effort that eventually brought the College recognition by The Princeton Review as one of the country’s “Great Schools for Psychology Majors.” Camac also was instrumental in the establishment of the College’s Phi Beta Kappa chapter. Noteworthy: In 2015, Camac, wearing a Spiderman shirt, descended 11 stories (132 feet) from the roof of the Patrick Henry Hotel in downtown Roanoke to support Big Brothers Big Sisters of the Roanoke Valley.

Dr. Lisa Earp – Associate Professor of Education. Before coming to Roanoke College as an adjunct in 1992, Dr. Earp taught for 14 years in Roanoke County Public Schools, spending most of those years as a reading specialist. At Roanoke College, she taught math, reading and secondary literacy. She supervised hundreds of field placements, taking students abroad, overseeing the education department’s first-ever national accreditation, and establishing a continuing, field-based reading program at East Salem Elementary School. She also co-directed the Margaret Sue Copenhaver Institute for Teaching and Learning.

Dr. Martha Kuchar –  Professor of English. Dr. Kuchar joined the faculty of the Roanoke College English department (now English and Communication Studies) in 1994, serving as director of the Intensive Learning program intermittently for eight years and as department chair from July 2011 to June 2016. During her years at Roanoke, Kuchar received two Fulbright Scholar awards — one in 2009 to Ukraine, and the second in 2016 to Moldova. In 2019, she had the honor of being selected to serve a three-year term on the Fulbright National Screening Committee to review student applications for Fulbright’s ETA program.

Dr. Elisabeth Gilster Velazquez – Associate Professor of Business Administration and Economics. Came to Roanoke in August 1995. Dr. Velazquez brought to the business administration and economics department a desire to expand curriculum for outreach to the global business community. She initiated collaborative research in a student-run import/export business called La Tierra Trading Company — similar to Amazon but before Amazon ever existed. Through her May Term classes, Velazquez provided her students with a love of new places and peoples, and an appreciation of different cultural perspectives.

Dr. Paul H. Hinlicky – Rev. J. Marshall Tise Professor of Lutheran Studies, Department of Religion/Philosophy. Dr. Hinlicky came to Roanoke College in 1999, after teaching theology at Jan Comenius University in Bratislava, Slovakia, and serving as an ordained minister of Word and Sacraments in various settings. He received the Dean’s Exemplary Professional Life & Service Award in the 2010-11 academic year. Hinlicky is credited with enriching campus intellectual life by bringing lecturers from far and wide to speak on topics both historical and contemporary.

Also retiring is Jan. G. Minton, Lecturer in Mathematics. Minton came to Roanoke College in 1995. She taught mathematics and statistics to more than 4,000 students in over 220 sections, and played important roles in curriculum development, helping shape several versions of general education mathematics courses. She was co-creator of the innovative MATH 115 course for biology majors, created an honors course “The Art of Mathematics,” and was a co-winner of the College’s Innovation Award for her work in calculus reform. At Roanoke, Minton was associate director of the Honors Program for eight years, serving as acting director for one year. In 2012, Minton launched and co-organized the Roanoke Valley Reef, a colorful community art project made entirely of crocheted pieces created by more than 250 local volunteers. 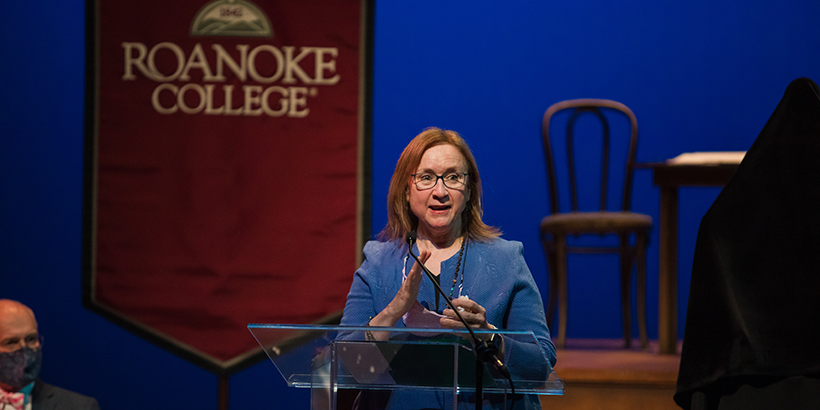 Congratulations to all the retiring faculty!