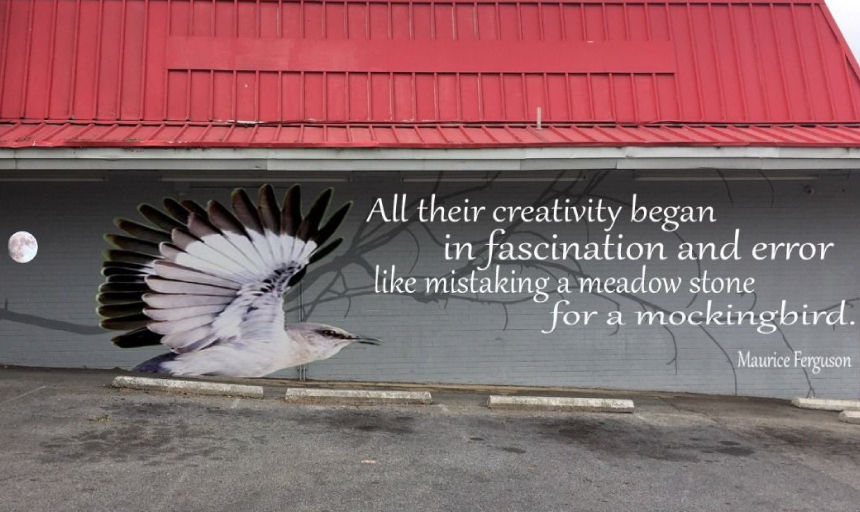 Toobz Muir's mock-up of the mural.

The Main Street section of Roanoke's Wasena neighborhood has undergone a number of recent changes to spiffy up the few storefront-lined blocks that open up to residential streets.

One new addition is a mural of a mockingbird on the street-facing side of Getty Mart. The mural celebrates the poem "Sailing for East Indies" by Maurice Ferguson, a Buchanan, Virginia native and 1977 graduate of Roanoke College.

The inspiration for the mural and Ferguson's involvement were born of a community hungry to celebrate local art and artists. Ferguson visited Roanoke College earlier this year to work with students and read some of his poetry. Following his visit, Dr. Melanie Almeder, an English professor at the College, worked with then-student Nicole Brabston '18 to find lines from Ferguson's poetry to print on bookmarks. The mention of creativity and wonder in the lines they settled on, from Ferguson's "Sailing for East Indies," particularly appealed to them:

all of their creativity began

in fascination and error

for a meadow stone.

"For the last few years, my friend and one of the U.S. founders of Poems in the Waiting Room, Angela Charlton, and I had been exploring ways we might locate more poems in more public spaces in Roanoke," Almeder says. "Angela and I met for dinner around the time Maurice visited [Roanoke College] and I said to her, 'I'd love to see lines of Maurice's poems painted on a building in Roanoke.' And Angela went into action." The lines chosen for the bookmarks would transfer seamlessly into a mural.

“What happened is an example of a community arts project supported by and made possible by a number of different people in our [Roanoke College] and Roanoke Valley communities who believe that good things happen when we come into contact with great poetry and great art.”

Soon after, Atul Patel, owner of the Getty Mart, allocated use of a store wall for the mural. David Wiseman, Roanoke College's digital technologies and services librarian, set up a Go Fund Me account for the project; Mary Crockett Hill-editor of Roanoke Review, a literary journal based at Roanoke College-assisted with fundraising. Charlton brought Roanoke artist Toobz Muir and Mim Young, of the Roanoke Art Mural Project, on board. After a month of work, the mural was formally dedicated on June 7.

"What happened is an example of a community arts project supported by and made possible by a number of different people in our [Roanoke College] and Roanoke Valley communities who believe that good things happen when we come into contact with great poetry and great art," says Almeder. "We have had positive feedback from the neighborhood association and from people who have visited the mural or come across it. It's been such a joy to be part of this project."

Ferguson, who retired from Blue Ridge Behavioral Healthcare after 27 years, has enjoyed a life rich in art and service. He says he honed his love of words from his mother and his introduction to T.S. Eliot's "Lovesong of J. Alfred Prufrock" in high school.

"I would be negligent not to credit two incredible English professors at Roanoke College: Dr. Denis Lape and Dr. Matthew Wise," Ferguson says. "They encouraged my writing and even allowed me to be a student editor of the Roanoke Review."

Ferguson published his first poem in the Piedmont Literary Review during his senior year at Roanoke College and hasn't stopped writing since. He is currently literary editor of Artemis Journal, a nonprofit arts and literary journal in the Blue Ridge Mountains region of Southwest Virginia and beyond.

Ferguson says the mural project took him by surprise. "I am so honored and thankful that they used an excerpt from a poem I wrote in 1980 titled 'Sailing for East Indies.' The poem, in its entirety, represents my deep love and admiration for those explorers who dared set sail into vast unknowns with no idea what awaited beyond the horizon."

See coverage of the  mural from the Roanoke Times, WDBJ, and WSLS.