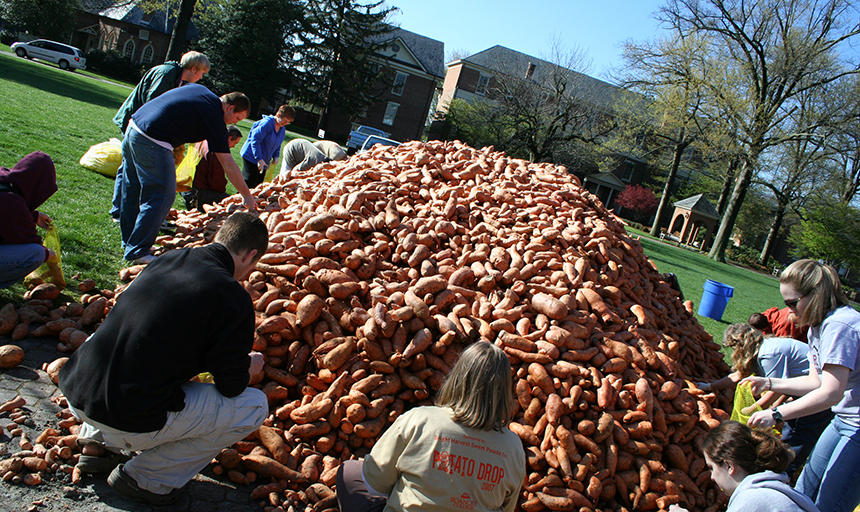 Roanoke College has a proud tradition of service to others

Relay for Life. Potato Drop. Habitat for Humanity. "R House."  These events represent the ways in which the Roanoke College community - students, faculty and staff - has come together for a higher purpose.

Roanoke College has a proud tradition of service to others.  In the 19th century, service was considered one of the main duties of a pastor: service to God, to one's congregation and to the community.  The Revs. Christopher Baughman and David Bittle co-founded the Virginia Collegiate Institute, with the support of two Lutheran Synods, to fulfill community needs - providing a high school education in an area where it was needed. The move to Salem and the establishment of Roanoke College continued that mission. Within their communities, Baughman as Institute principal and Bittle as College president, served not only their institutions but the communities in which they lived. Their faculty did likewise. This focus on service to others became ingrained as part of a Roanoke College education.

One of the chief desires of the College's founders was to provide the "advantages" of a college education to "young men of modest means." Consequently, the College took steps to keep tuition and fees as low as possible.  Tuition, for example, remained $50 from 1867-68 until 1919-20.  In another step forward, the Board of Trustees in 1906 agreed that young men "of suitable age, advancement, gifts and character," who resided at Salem's Baptist and Lutheran children's homes, would be granted free tuition. Five years later, the board established a Student Loan Fund, from which students could borrow $50 to $125 at low interest, with repayment beginning a year after the student left College.


Wartime service
Wartime provided opportunities for service, both in the military and on the home front. During World War I and World War II, a number of students and faculty left the College to join the military service. To prepare, the College offered a course in military drill. When the government established the Student Army Training Corps at hundreds of colleges across the nation, Roanoke applied for a unit. For three months beginning in the fall of 1918, the College essentially had become a military training school for its 121 students.

One of the greatest humanitarian acts was made by John Alfred "Fred" Morehead '1889, the College's fourth president. Besides his presidential duties, Morehead had served for four years as president of the United Synod of the South and was subsequently elected to the Executive Board of the newly established United Lutheran Church in America in 1918. The ULCA appointed Morehead chairman of the European Commission of the National Lutheran Council. Taking a leave of absence from the College in 1919, Morehead left for Europe to begin extensive work in administering war relief in 19 countries. He resigned from Roanoke the following year. Morehead worked tirelessly for five years, until most of the relief work was at an end. For his efforts, Morehead received numerous awards, including several knighthoods. In 1936, he was nominated by four international figures, including former U.S. President Herbert C. Hoover, for a Nobel Peace Prize.

If World War I was a test case for military preparedness, World War II was the real thing in terms of length and impact. After the war in Europe began, the College welcomed the Civilian Pilot Training Program to train pilots for the Army or Navy. During the first three years, more than 100 pilots completed the program. In June, 1942, it was reorganized as the full-time War Training Service, with students training as Naval Aviation Cadets. All told, there were six military reserve programs active on campus. In addition, recruiters came to campus to enlist young men; seven of the 29 male faculty and staff took leave to join. At war's end, approximately 1,120 Roanoke College men and women had served in the military.

Civilian students also prepared for war. A seriousness of purpose was ever-present.  Emphasis was placed on physical preparedness as well as mental.  Even the College curriculum was accelerated to enable students to move through more quickly. Students wrote to friends in the service to ensure that "mail call" morale boost. Male students helped local orchardists with fall apple picking in a time of labor shortages. Female students sold war savings stamps, attended USO dances and worked for the Red Cross.

An amazing service project grew out of the Korean War experience of international student Woong Il "Frankie" Lee '67, who, as a refugee, remembered receiving a CARE package from the United States. As student body president in 1966, Lee spearheaded a massive project to provide clothing, shoes, school supplies and other gifts to a Catholic orphanage in Vietnam. More than half of the student body participated, collecting from campus people and from locals. Students contacted area churches, women's clubs, civic organizations, local YMCAs and YWCAs, and area businesses for support. Some students appeared on television and radio to extend their appeal. Others wrote to their hometowns. When the final tally was made after three months of soliciting, the total was somewhere between 2 and 3 tons of gifts and clothing. Roanoke College alumni stationed in the Saigon area were scheduled to visit the orphanage after the gifts arrived.

Dance-a-thons, Angel Tree gifts and Habitat builds
Campus service also has included the fund-raising projects of Greek organizations. "We sold programs at the ice rink... to raise money for [our] cause," an alumna and member of Phi Mu recalled. Delta Gamma's philanthropy was sight preservation and aid to the blind. Members of Sigma Chi worked on two projects: raising funds for a children's home in Colorado, with money coming through Derby Day and a horse show; and hosting a Christmas party for children at the Virginia Baptist Children's Home. Other Sigs volunteered as Big Brothers. In the early 1980s, members of Pi Kappa Phi held dance-a-thons for the Muscular Dystrophy Association. They have also raised funds over the years for their own national philanthropy, Push  America, created by former Pi Kappa Phi Executive Director Durwood Owen '55. In the late 1990s, the fraternity raised $10,000 by standing with donation buckets at two traffic stops. With that and their own manpower, they assisted in building play units for disabled children at Penn Forest Elementary School in Roanoke County.

Increasingly during the past 50 years, Roanoke's service opportunities have been more deliberately organized. During the more recent Co-Curricular Learning and Service years, when required service hours were part of the freshman experience, there were ample opportunities for student service that benefited many Roanoke Valley organizations. On "Service Day," held during orientation, all the freshmen piled into vans that scattered to various organizations around the Valley. Students performed works of service such as cleaning trails, picking up trash along roads, stocking shelves at food pantries and painting. Throughout the year, lists in the Chaplain's Office offered times for serving food at RAM (Roanoke Area Ministries) House, tutoring at the West End Center for Youth, and more. Since the mid- to late-1990s, faculty and staff have bought "Christmas angel" gifts for children at the West End Center and a mitten/hat/scarf tree sponsored by Catholic Campus Ministries.

The College has had a long-time service connection with Habitat for Humanity. In 1986, the Rev. Paul Henrickson, then College chaplain, received a $1,000 program support grant for college chaplains from the Lutheran Church in America (LCA). His plan was to work with Habitat for Humanity, destination undetermined.  A chance phone call from Geneseo University asking for overnight stay at Roanoke for a group on its way to Columbia, S.C., to work for Habitat, sparked a connection. In spring, 1987, an annual migration of about 20 Roanoke students to Columbia began; fall break trips began in about 1999. In total, more than 650 students have participated in 41 trips. A chance conversation in 2005, this time with a local RC parent, brought funding for the first Habitat "R House" build on campus. While this serves as a replacement for freshmen Service Day, the activity also includes volunteer labor from President Maxey, his wife Terri, and other campus employees.

The stories are endless - hurricane relief; home improvement projects, including one with Rebuilding Together Inc., for an 83-year-old woman whose Salem home had a dirt floor; and Coach Page Moir's basketball fundraiser for the Community Christmas Store in Salem. Roanoke College, in numerous ways, has served people locally, nationally and internationally.  Through the years, service has increasingly become a part of the College's focus on educating the "whole person." The challenge is to carry service beyond one's own life into that of others, during and after one's years at Roanoke.