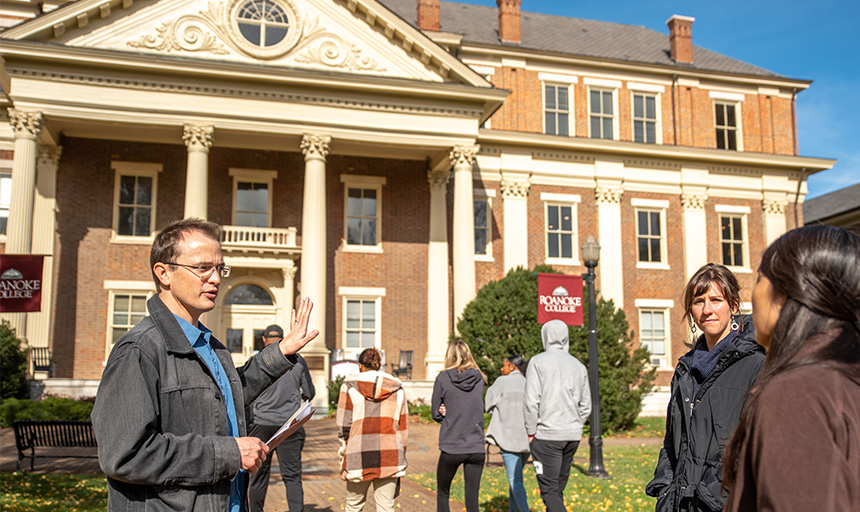 Jesse Bucher, director of Roanoke College's Center for Studying Structures of Race, and Lacey Leonard, its curator, explain the history behind the circa-1847 Administration Building during a new walking tour that documents the presence of enslaved workers on campus.

Roanoke College’s commitment to shedding light on a difficult part of history has been recognized with a 2022 award from the Roanoke Valley Preservation Foundation.

The Center for Studying Structures of Race, created to research and reckon with the legacies of slavery, was honored with a Kegley Preservation Award in the education category for a new walking tour that guides visitors through the history of enslaved labor on Roanoke College’s campus.

The tour, launched in October, documents the role that slavery played in the foundational years of the 180-year-old college. That includes highlighting buildings — such as the circa-1847 Administration Building constructed by enslaved workers — and sharing research from student fellows who found that some of the College’s early leaders were slave owners.

Roanoke College itself did not own slaves, but the tour illustrates the deep imprint the campus still carries from that era. The 11-point walking tour, entitled Histories of Enslavement at Roanoke College, was created to reflect on a part of history that for too long was hidden and neglected, organizers said.

CSSR Director Jesse Bucher noted that student research fellows pored over reams of records in government archives this summer to uncover the names of enslaved people in the valley — an arduous undertaking as documents from that period often failed to acknowledge the identities and humanity of the enslaved.

The walking tour project, which CSSR Curator Lacey Leonard worked with students to design, names the people who were found in records whenever possible.

“These are individuals who were intentionally left out of the story of our region's history,” Bucher said. “The efforts carried forward by our students and others is an important step in the right direction — not only in speaking their names and honoring the truth of their existence but as a necessary step where we can reach into the past and better tell a much broader, more inclusive, more truthful story of the Roanoke Valley.”

Bucher added that he was grateful the student teams were able to see their work affirmed as meaningful beyond the college campus. He accepted the preservation foundation’s award alongside some of the student researchers, as well as Roanoke College Graphic Designer James France, who encapsulated the tour into a brochure that allows visitors to take it as a self-guided activity. 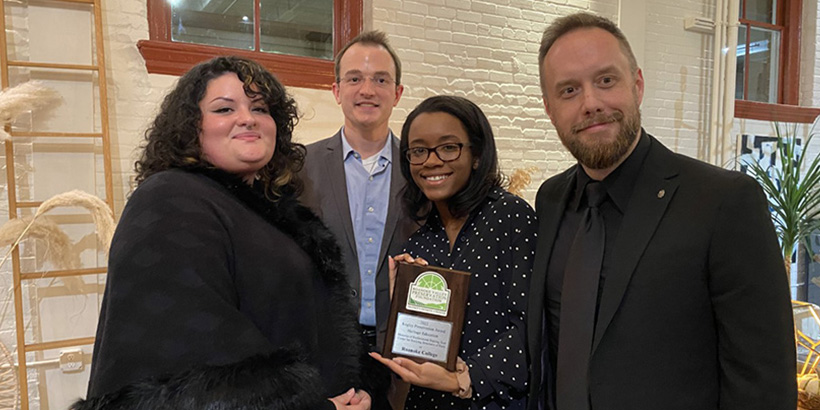 Casey McGirt ’24 (left), Jesse Bucher, Sydney Pennix ’25 and James France accepted a preservation award Nov. 15 on behalf of the Center for Studying Structures of Race. McGirt and Pennix were part of a team of student researchers who devoted the summer to uncovering the names of enslaved people who lived in the Roanoke Valley. To learn more about that project and hear directly from the students, click here: 2022 Summer Research: The Genealogy of Slavery

The foundation, in announcing the award, said it was impressed by the college’s proactive commitment to grappling with a painful chapter of history.

“Communities look to institutions of higher education to model ways of moving forward as we deal with the 21st-century legacy of America's original sin,” said Whitney Leeson, president of the regional foundation as well as a history professor at Roanoke College. “We look forward to your continued good work at the CSSR.”

The mission of the CSSR has challenged students not only to hone their research skills, but to confront and dig deeper into difficult truths about the past.

Sydney Pennix ’25 said the research work felt profoundly personal to her both as someone who grew up in Roanoke and as a third-generation Maroon.

“I felt almost a yearning to learn more about African-American history in our area,” she said. “I knew it would be emotionally challenging, but that’s exactly why I wanted to do it: to lean into and process that.”

Pennix, a psychology major who plans to work in counseling, said a moment she’ll always remember is taking her mother and grandmother, both Roanoke College alumna, on the walking tour.

“They had never heard about this history either,” she said. “To share this information more and spread it across the community, I think that’s something important.”

The research initiative itself required students to immerse themselves in dense, handwritten records stored away in archives and courthouse logs.

Casey McGirt ’24 said the opportunity to do that type of hands-on work better prepared her to be an advocate for marginalized communities. A member of the Choctaw Nation, McGirt plans to dedicate herself to supporting and empowering indigenous tribes after she graduates.

“In that activism, it’s invaluable to know where to look for information and find records,” she said. Cultivating an understanding of the history that shaped modern-day events is also vital, she added.

“It’s important to make sure you’re educated and can speak to that,” McGirt reflected. “Being able to say that I’ve been in the archives, I’ve read them, and I know what has been happening not only from a current political perspective but from a historical perspective is really powerful.”

The self-guided walking tour brochures are now available on campus at the Administration Building, Colket Center, Fintel Library and Admissions. Organizers also plan to work with community partners, such as the Salem Museum, to host more group tours in the spring.

The award from the Roanoke Valley Preservation Foundation recognized a new walking tour that traces the history of enslaved labor on Roanoke College’s campus. The tour is now available in a brochure that allows visitors to take it as a self-guided activity.

In accepting the preservation award Nov. 15, Bucher thanked the foundation for recognizing the project and elevating awareness of it. The college is encouraging community members to visit campus and take part in the self-guided tour.

Pennix, who along with McGirt attended the awards ceremony, said it was heartening to have the support of local community leaders and historical advocates.

“It’s really great to see our community is leaning into this as much as we are,” she said. “To see that it’s resonating and helping people learn more about our history, I mean, that’s everything we hoped for.”

The Center for Studying Structures of Race was formed at the end of 2019 as a conduit for teaching, research and community engagement around issues of race. The initiative’s name intentionally evokes the significance of historical structures, such as those highlighted in the walking tour, and the imperative to examine the impacts of structural racism.

One of CSSR’s major, ongoing projects is developing a memorial to honor the enslaved workers who built parts of Roanoke College. Organizers are currently hosting a lecture series featuring artists, architects and scholars whose work speaks to the role of monuments and memorials in society.

The next lecture, which will be held via Zoom on Nov. 29, will spotlight Guyanese-British sculptor Hew Locke. Register for MEMORIALS, MONUMENTS & MEMORY LECTURE SERIES: HEW LOCKE.

The Roanoke Valley Preservation Foundation is a nonprofit dedicated to preserving local history. One of its hallmark events each year is the presentation of the Kegley Preservation Awards named after local journalist, historical advocate and Roanoke College alumnus George Kegley ’49.

The award given to CSSR was one of 12 bestowed this year. Other honorees included Roanoke College alumni Alex Burke ’16 and Garrett Channell ’20, who were lauded for their work at the Salem Museum.

Burke, assistant director of the museum, and Channell, director of archives and education, bring an enthusiasm to their work that can’t help but inspire others and convert “history-resisters into eager history learners,” foundation leaders said.

Greg Terrill ’94, who co-chairs Roanoke College’s Parent Leadership Council with his wife, Nicole Terrill ’95, was also part of a project honored with an award.

The restoration of the more than century-old Fire Station No. 1 building in downtown Roanoke was unveiled earlier this year to widespread praise from community members who had long worried about what would become of the shuttered firehouse.

The building, whose revitalization was spearheaded by Old School Partners, LLC, now serves as a showroom for a Roanoke-based furniture maker, Txtur, which Greg Terrill leads as CEO and president. There are also plans to debut an upscale restaurant and boutique hotel in other parts of the space later this year. Both will be run by Terrill’s company.

In addition to being celebrated with an award, the renovated firehouse and Txtur’s showroom served as the venue for the 2022 awards event. The foundation described the structure as an incredible example of saving an iconic community building.

The new showroom of Roanoke-based furniture maker Txtur, which is helmed by Greg Terrill ’94, served as the reception venue for the Roanoke Valley Preservation Foundation's 2022 awards. The showroom is located in the recently revitalized Fire Station No. 1 building in downtown Roanoke, 13 Church Ave. SE, a historic preservation project that was honored with a foundation award for adaptive reuse and stewardship. 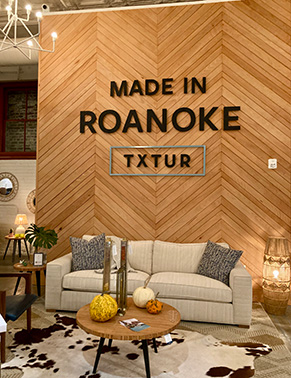 The new showroom of Roanoke-based furniture maker Txtur, which is helmed by Greg Terrill ’94, served as the reception venue for the Roanoke Valley Preservation Foundation's 2022 awards. The showroom is located in the recently revitalized Fire Station No. 1 building in downtown Roanoke, 13 Church Ave. SE, a historic preservation project that was honored with a foundation award for adaptive reuse and stewardship.