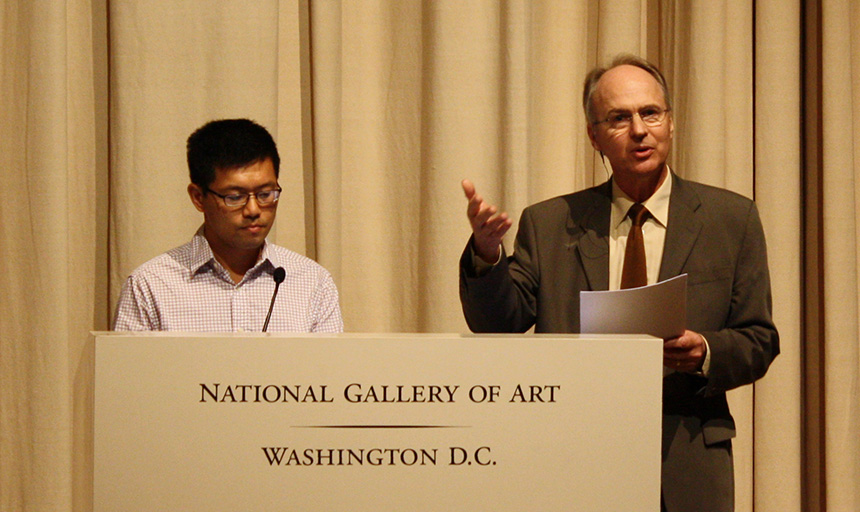 Schultz to publish War Memoranda with Taubman Museum of Art

Recently retired Roanoke College Professor Dr. Robert Schultz has collaborated with artist Binh Danh on a book responding to Walt Whitman, to be released this May.

The book was born out of their art exhibition that includes a unique form of photography appropriate to the author of Leaves of Grass. Schultz developed portraits of Civil War soldiers and their families in the flesh of leaves using the “chlorophyll print” process he learned from its originator, Binh Danh. The War Memoranda exhibition was first shown at the Taubman Museum of Art in 2015 and since then has been traveling to museums around the country.

Schultz and Danh have drawn from the exhibition to make War Memoranda: Photography, Walt Whitman, and Memorials, which Schultz describes as a book of art, poetry, and comment that reflects upon the Civil War through Whitman’s humane example. War Memoranda is being published by the Taubman Museum of Art—its first such venture—with funding provided through the crowd-sourcing website Kickstarter.com. Supporters receive the book and other premiums in an arrangement reminiscent of the nineteenth-century practice of “publication by subscription.”

War Memoranda features 51 photographs, including Schultz’s chlorophyll prints and Danh’s cyanotype photographs of Civil War battlefields and memorial sites. Interspersed are original poems, along with a generous selection of Whitman’s poetry and prose, plus essays by four noted scholars and poets. Publication of the book marks the poet’s birth May 31, 1819. War Memoranda explores the poet’s response to the Civil War in his great work Leaves of Grass and his wartime prose journal in which he emphasized the impact the war had on individual soldiers and their families.

Schultz credits his move to the Roanoke area with launching his collaboration with Danh, whom he met through the Taubman Museum. Eight years ago Schultz first saw Danh’s art at the museum, which now has produced their exhibition and is publishing their book. War Memoranda will be issued in a fine-art hardcover edition limited to 500 copies available for order through the Kickstarter campaign that will end on April 2. Schultz will speak at the Taubman March 23 when a special exhibition of War Memoranda artworks will be shown, and in August he will be a featured speaker at the Walt Whitman International Festival held at the poet’s Long Island birthplace in celebration of the 200th anniversary of his birth.