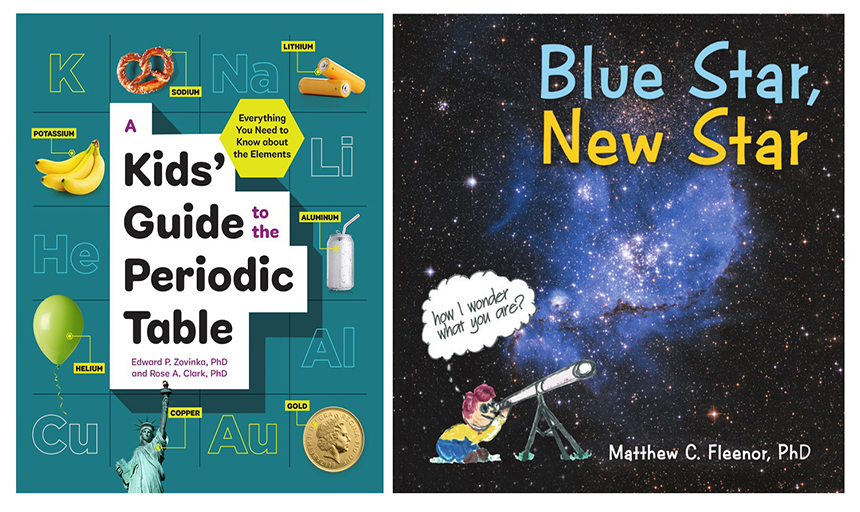 Edward Zovinka '87, a professor of chemistry at Saint Francis University, and Matthew Fleenor, professor of physics and astronomy at Roanoke College, have written children's books that engage young minds in science, and in exploring, explaining and understanding their world.

As a chemistry major at Roanoke College, Edward Zovinka ’87 remembers the positive feeling he received from planning and presenting Chemistry Club science events, held in Massengill Hall for the Salem community.

Practicing demonstrations in the stockroom, getting to know other “chemistry folk” while preparing for the event, even the fun and stress of the actual event — “I became hooked on outreach,” says Zovinka, now a professor of chemistry at Saint Francis University in Loretto, Pennsylvania.

Over the years, Zovinka has expanded outreach efforts with his students at Saint Francis and through involvement in organizations such as the American Chemical Society and the Spectroscopy Society of Pittsburgh. Consequently, his web presence on chemistry grew, and he was approached by Callisto Media/Rockridge Press to write a book on STEAM (Science, Technology, Engineering, Art and Mathematics) activities for 8- to 12-year-olds.

“Real Chemistry Experiments: 40 Exciting STEAM Activities for Kids,” released in November 2019, earned numerous positive reviews, throughout the United States and abroad. The response prompted another approach to Zovinka from Callisto/Rockridge about writing a second book, this one about the periodic table.

“With 118 elements, a full-time job and family, I knew I could not take on the periodic table without help,” Zovinka says. “Fortunately for me, my wife [Dr. Rose Clark, also a chemistry professor at Saint Francis] agreed to take on the project with me. It was a challenging, yet family bonding, experience.”

The result was “A Kid’s Guide to the Periodic Table: Everything You Need to Know about the Elements,” released in July 2020. It too, has garnered good reviews stateside and abroad.

“By sharing the many cool facts and opportunities opened by learning chemistry, I hope to make the world a little bit better.”

"We are star stuff"

Every summer, Matthew Fleenor, professor of physics and astronomy at Roanoke College, teaches “Astronomy Controversies in the Modern Era,” an astronomy course for non-science majors. Astronomy, he maintains, is a wonderful way to increase interest in science.

But as a college educator and parent, he wanted “our future generations to be filled with ‘wow’ about the night sky, our sun-star, and the big universe in which we live.”

So he wrote “Blue Star, New Star,” a children’s book that provides an introduction to astronomy through memorable verses and prose explanation.

Fleenor describes the book as a “layered tool for astronomy literacy.” While the book appeals to emerging readers ages 4-8, it also is intended to be read by adults to younger audiences with the hope of educating both the reader and the listener.

The overall theme of the book is stellar evolution, astronomy, and the night sky. The setting: present, near-earth orbit and our galaxy. The intended takeaway: wonder and curiosity.

“I think everyone is intrigued by the night sky,” Fleenor says. “It deepens our imagination while raising our curiosity.”

To read the full version of the story about Drs. Zovinka and Fleenor, click here.