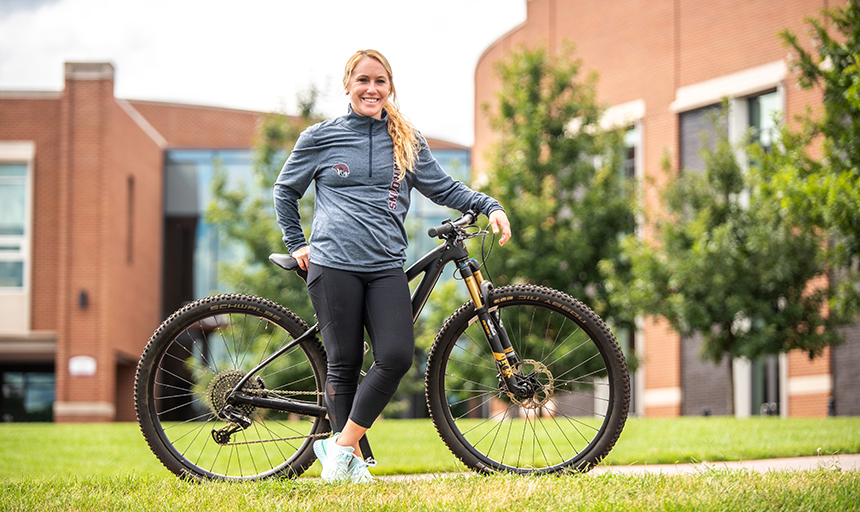 Shelley Olds ’03, a collegiate soccer star who went on to become a world-class cyclist and member of the U.S. Olympic Team, is returning to her alma mater to coach Roanoke College’s new competitive cycling program for men and women.

Olds, who relocated to Salem from Arizona to take on her new role, said returning to Roanoke College to help build the cycling program was a “no-brainer” for her.

“Roanoke College is like my family. They asked me to come home and I said yes, of course,” Olds said. “I have every interest in making this the best program that it can be because I want the best for the school, always.”

Roanoke’s cycling team, which has been registered with USA Cycling, will compete this fall as a club sport. The team will soon be elevated to varsity status, at which point it will compete as part of the Atlantic Collegiate Cycling Conference (ACCC).

“We are very excited that Shelley is coming home to her Maroons family,” said Tom Rambo, dean of students at Roanoke. “She is living proof that Roanoke College is a place where students can develop and find their purpose. We are all proud of Shelley and know she will be a great educator, mentor and coach!”

Olds, a native of Groton, Massachusetts, was inducted into the Roanoke College Athletic Hall of Fame in 2016 for her achievements in soccer and cycling. As a midfielder on the women’s soccer team, she was a two-time NSCAA All-South Region selection, the 2002 ODAC Player of the Year, and a four-time All-ODAC selection, including three first-team honors to close her career. She left the program as the all-time leader in scoring (98 points) and assists (26), and she came in second in career goals (36).

After college, Olds joined her family in California and began training for a marathon to stay in shape, but a case of Achilles tendonitis forced her to seek a different activity. She began cycling and soon found herself riding competitively. After winning the UCI Road World Cup in China and a stage of the women’s Giro d’Italia, she joined the U.S. Olympic Team and competed in the London games. Despite pouring rain and a flat tire in the closing kilometers, she finished 7th overall.

Before she found out about Roanoke’s new team and was offered the coaching job, Olds had planned to pursue a doctorate in physical therapy. She said she’ll put those plans on hold temporarily to invest time and energy into recruiting athletes for the cycling program.

“I can’t let anybody else but me start this program,” she said. “If this is going to be the first-ever cycling team at Roanoke College, I want to be a part of it.”

“I have every interest in making this the best program that it can be because I want the best for the school, always.” 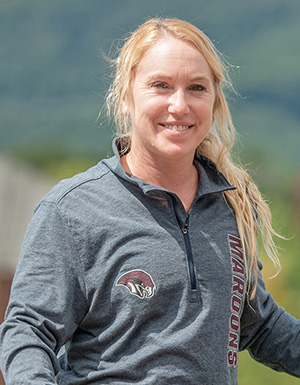 Although the Roanoke cyclists are starting out as a club, Olds said they will be expected to commit to the team and be disciplined and professional. The cyclists will register and compete in USA Cycling events, earning points as both a team and as individuals.

Olds said this is a fitting time to return to Virginia’s Blue Ridge, which has the ideal terrain for cycling and is home to a booming cycling culture. The region has been named America’s East Coast Mountain Biking Capital and has earned a silver-level ride center designation from the International Mountain Biking Association. A recent addition to the scene is Virginia’s Blue Ridge TWENTY24, a national cycling team based in the Roanoke Valley that aims to prepare female cyclists for the Olympics.

Nicola Cranmer, with whom Olds trained in California, is founder and general manager of Virginia’s Blue Ridge TWENTY24. She said the team is recognized as a valued recruitment platform for young athletes heading to college, with eight professional athletes and 27 junior athletes currently in the program. Olds was hired by the team last year to direct their races.

“I'm thrilled that Roanoke College will be an additional pathway to education for cycling students,” Cranmer said.

On Sept. 8-10, Olds will join three-time gold medalist Kristin Armstrong, the most decorated U.S. women’s cyclist of all time and the best time-trialist in the sport’s history, for Virginia’s Blue Ridge’s 35th annual meeting in Roanoke. The weekend will include a community meet-and-greet with Armstrong, Olds and members of Virginia's Blue Ridge TWENTY24 in the outdoor pavilion at Smith Park on the Roanoke River Greenway. That event will take place from 10 a.m. to noon and is open to the whole community.

“The land in Southwest Virginia couldn’t be more perfect for cycling. It is truly a hidden gem that Virginia’s Blue Ridge has already begun to highlight,” Olds said. “I think the start of Roanoke College’s cycling team will be a strong catalyst in bringing national and international recognition to the region for its stunning beauty and as an ideal place for cycling.”