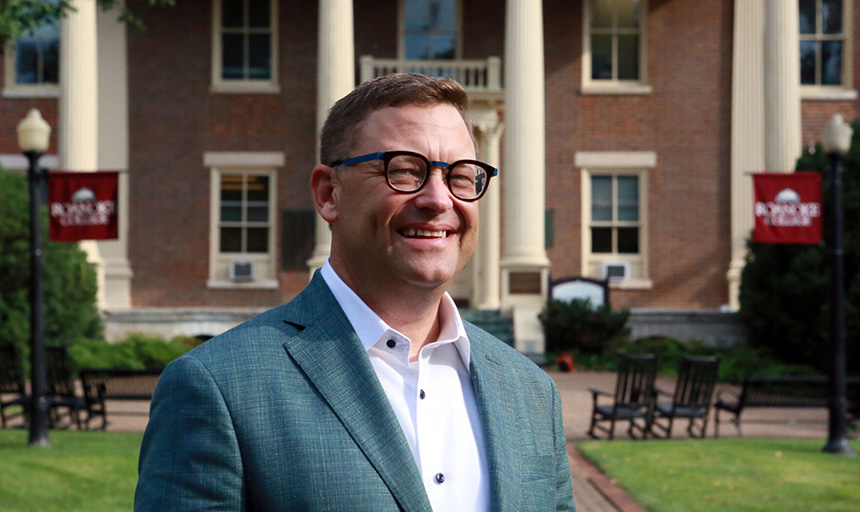 Reprinted with permission from The Roanoke Times.

“I had great doubts that I was going to graduate from high school,” Shushok said. “I think I’m as surprised as anybody that I would be sitting here talking to you about being the president of Roanoke College.”

Friday morning, he sat among the pineapple wallpaper and Victorian-style décor of his office inside the high-columned Roanoke College administration building, and said like many people, his early experiences developed his initial identity.

“I was deemed in those days a special ed kid in elementary school, I was slow to learn to read,” Shushok said. “Very early on — as a first, second, third, fourth, fifth grader — I adopted an identity that I wasn’t smart, and it took me a long time to unravel that identity.”

Shushok’s smarts might’ve never unraveled without crucial help from teacher mentors in high school and college. It’s partly why he said he took interest in the role of 12th president at Roanoke College, a school known for mentorship, and what interested him in higher education administration from the beginning.

“Late in high school, I had a couple mentoring high school teachers that helped me find some confidence, and helped me find my way to college,” Shushok said. “I found a great graduate school and went off, took a big risk, thanks to faculty mentors.”

Shushok, 53, said mentors helped him make fundamental transformations that bettered his life. He said there is nothing more inspiring and life-giving than being with people who discover their talent and how to use it for good.

“The way I view this work is launching talent into the world,” Shushok said. “Everyone who shows up here at Roanoke College is talented. Many of them don’t know yet just how talented they are.”

With mentorship from Roanoke College faculty, the 570 new and transfer students arriving to Salem for fall semester starting Aug. 30 will soon start unraveling their untapped abilities as part of the learning process, he said.

“Our strength hands down are the remarkable faculty,” Shushok said. “They are passionate about mentoring and coaching and guiding our students.”

But colleges and universities face a fair array of obstacles, and one is specific to Roanoke College as a private liberal arts school striving to enroll upwards of 2,250 students, he said.

“The challenge is one of scale,” Shushok said. “We’re a very personalized, customized education that comes at a cost. We know that affordability and access is incredibly important.”

Education is a good investment, and data proves it, he said. But colleges must better reach and interest people who might not otherwise recognize the opportunity as one for them, including underrepresented and underserved students.

“Higher education is in a place right now that is going to require lots of transformation,” Shushok said. “Because the world is changing so fast, we have to be responding constantly to that evolving marketplace.”

Colleges and universities must make speedier decisions to keep up with rapidly changing demands from students navigating swift social and professional currents, he said.

“Our mission is to meet the needs of the community by providing graduates and citizens with the right skills, with the right dispositions and ways to make an impact,” Shushok said. “We’ve got to be doing that at a pace that we haven’t historically been accustomed to, and that’s a big challenge for higher education.”

Formerly vice president for student affairs at Virginia Tech, Shushok spent July learning from his predecessor Michael Maxey and assumed the Roanoke College presidency Aug. 1. Shushok said his earliest efforts are about building relationships and trust to enable the sort of transformation he is envisioning.

“Into the future, partnerships are going to be the name of the game. That means linking arms with industry and companies, to be working in partnership to better understand their needs in graduates,” Shushok said. “I would love it if there were a couple companies that wanted to have an office space here at Roanoke College, to be in partnership with our faculty, students, graduates.”

And those partnerships will extend to local public school systems too, Shushok said. He echoed words of one of his history professors at Baylor who said, “time is passing and it’s later than you think.”

But rather than feeling anxious about the work ahead and the precious time in which to do it, Shushok from the office overlooking campus and Main Street Salem said he appreciates the opportunity before him:

“Roanoke College wants to be a part of lifting up this entire region. We want this to be the kind of place that allows everyone to live a life that is worthy of their potential.”