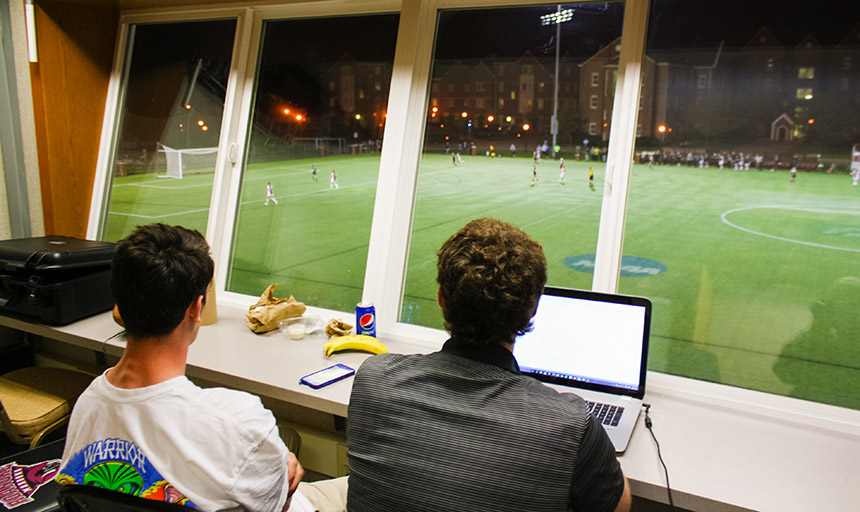 A mutual love of the movie "Moneyball" led to the creation of a new student group at Roanoke College dedicated to providing statistical analyses to Roanoke sports teams.

Dr. Roland Minton, a math professor at Roanoke, said he got his students interested in this new group, the Maroon Stat Crew, by comparing it to "Moneyball," which stars Brad Pitt, a general manager for the Oakland A's, who develops a roster of baseball misfits with the help of a number-crunching economist. It's an example of how statistical analysis and sports combine for fiscal and game-winning success.

Minton founded the stat crew in the fall of 2015 with seven students of various majors. Since then, it has nearly doubled in size, with 13 students by the start of February 2016. Stat crew members attend Roanoke College sporting events to collect and analyze data for the teams. At basketball games, for example, the crew tracks and records statistics reflecting the locations of shots and rebounds, a variety of hustle statistics and offensive and defensive efficiency. 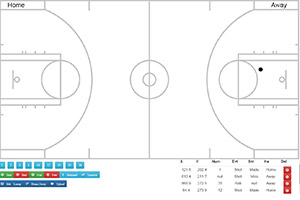 Andrew Feeney '16, a lacrosse player and stat crew member, said that the statistics not only help the crew connect the classroom to the sports community, but they also help "hold the athletes accountable."

The student stat crew uses an app created by Dr. Adam Childers, a math professor at Roanoke, that shows a diagram of the field or court and allows the students to input data on their laptops, creating statistics in real time. The stat crew hopes to provide coaches access to the app in the future, which would allow them to see the stats as they are created during the games.

The crew attends home games in groups of threes. At the basketball games, one person records the shots, another person records rebounds, and a third person calls out the action on the court as the other two are recording.

“Our numbers support what the coaches do. It’s nice to see the numbers back up the team strengths.”

Connor Sampson '16 added, "[The stats] are like a flow chart - what you have to do to score goals."

The crew produces statistics that help find patterns among the players' performances, which help the coaches and teams play more effectively. 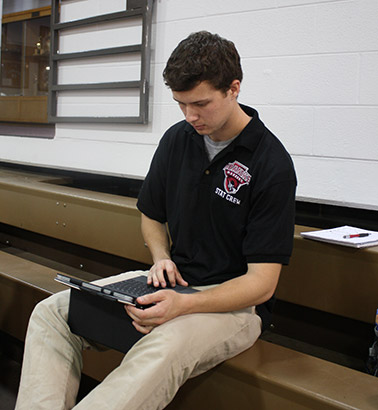 Previously, Roanoke soccer coaches Ryan Pflugrad and Phil Benne had considered buying statistical analysis software for the soccer teams. But the stat crew, working for free, has saved them $10,000. Minton said that one of the goals of the crew is to "collect data that is better than what the coaches are already getting."

Hobby said her coach sent the women's soccer team the passing pattern diagram that the stat crew had compiled. "The solid numbers paint a nice picture," she said. "They are eye-opening."

The star-shaped diagram helped the coach communicate ideas and decisions to the team, Hobby said.

"Soccer is a subjective sport," she said.  The statistics "give us an objective way to analyze" the game.

"I really enjoyed last fall because [the stat crew] went from nothing to something," Sampson said. "This semester will be great because it will have a lot of problem solving. It will be cool to say that I was part of [the stat crew] in 10 to 20 years."

Feeney said the stat crew is a great way to try your hand at something in college that may be a career interest.

"It is cool to start something new - my little stamp on Roanoke College," he said.

New members have also found a friendly environment with a lot of growth potential. David Moreau '19 said, "[As] a freshman this was a way to get my foot in the door, and the first way to really give back to the school."

Many members of the stat crew spoke about being inspired by the statistics they tracked for their favorite professional sports teams. However, producing statistics is not as easy as it may appear.

"Do not take the numbers for granted," Feeney said, adding that behind those numbers is a lot of hard work.