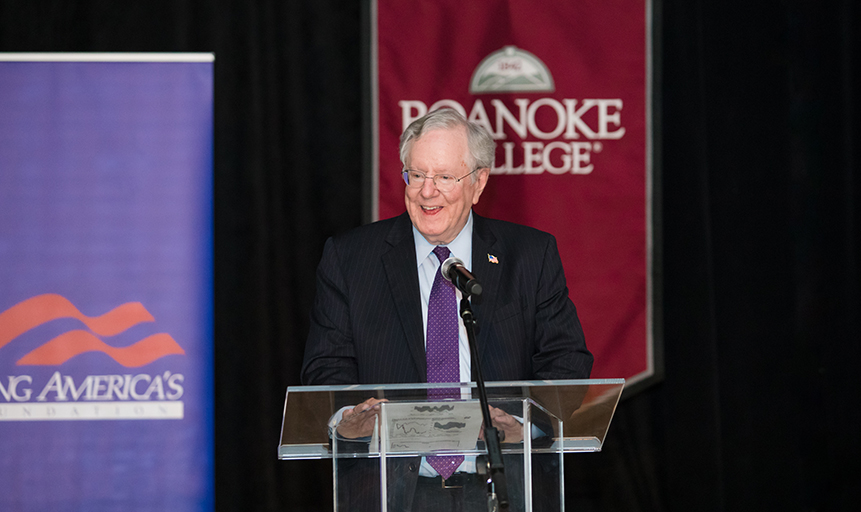 Roanoke College on Nov. 15 welcomed publishing executive and politician Steve Forbes to campus, where he spent a full day interacting with students before delivering the David L. Guy ’75 lecture in the Cregger Center.

Although Mother Nature delivered ice-cold rain all day, the weather did not deter the more than 400 students, faculty, staff and local community members who turned out to hear Forbes’ talk on Tuesday evening, which was titled “The Case for Free Enterprise Over Socialism.”

Forbes’ visit was part of a speaker series that is funded by David L. Guy, a member of the Class of 1975 who has a long history of generosity toward his alma mater. In addition, the visit was sponsored by Roanoke College’s Center for Economic Freedom and Young America’s Foundation.

“This event, like the rest of the speakers for the center, adds to the remarkable, complete education offered at Roanoke College,” said Alice Kassens, director of the Center for Economic Freedom and John S. Shannon Professor of Economics. “It’s crucial for students to hear all points of view and make up their own mind.”

Forbes, who is editor-in-chief of Forbes magazine and was a candidate in the 1996 and 2000 Republican presidential primaries, started his day at Roanoke by having lunch and discussing inflation with a group of eight students. Later, he taught a section of Associate Professor Michael Enz’s class, INQ-300: The American Dream. Guests in the class included Roanoke College President Frank Shushok Jr., David Guy and Randolph College President Sue Ott Rowlands. Forbes then had dinner with a small group and attended a reception that drew 150 guests before his lecture kicked off at 7 p.m.

Ethan Stevenson ’24, an economics major who attended the luncheon with Forbes, said he appreciated the time Forbes took to answer each student’s questions. “It was interesting and amazing to have someone influential like him on campus,” Stevenson said. “He was very thoughtful.” He planned to call his parents after the evening lecture to tell them about the experience.

Forbes kicked off his lecture by pointing out that no economic or political system is perfect because they are all administered by humans, who are inherently flawed. However, he argued, free markets ultimately work because they leave room for creativity and innovation to solve big problems, even when those solutions go against the established interests.

“What makes free markets work is precisely that regardless of your background, regardless of the station in which you were born, in a free society you have a chance, as Abraham Lincoln put it, to improve your lot in life and make something better,” he said. 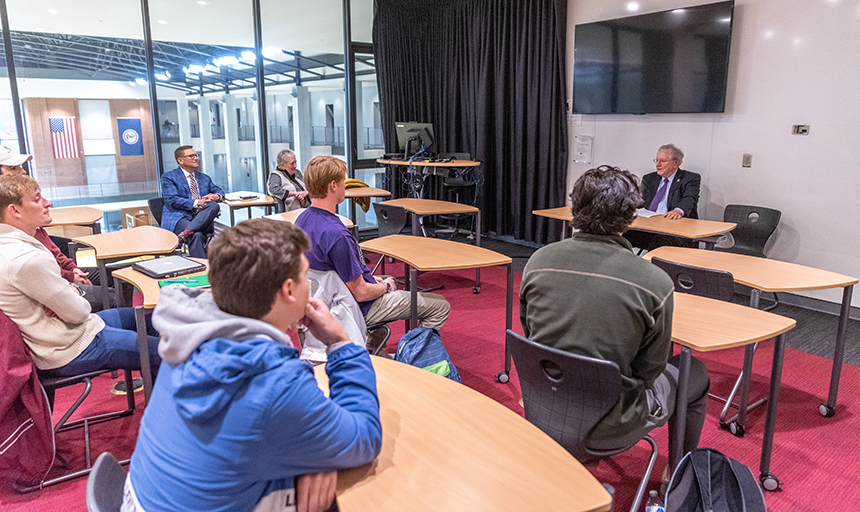 “This event, like the rest of the speakers for the center, adds to the remarkable, complete education offered at Roanoke College.” 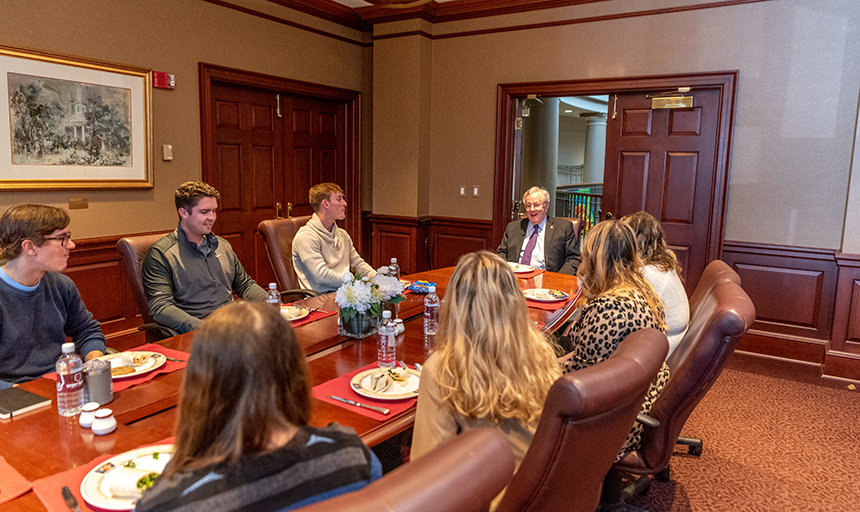 Forbes eats lunch and discusses inflation with a group of Roanoke College students.

Forbes went on to provide a number of examples of world-changing innovations that sprang from human ingenuity in a free market system, including the discovery of how to use oil as fuel or the invention of shipping containers. He also said capitalism turns scarcity into abundance, as in the case of the automobile, which was once a luxury only for the rich but is now, thanks to the assembly line, a purchase that every working person can afford.

Forbes also addressed current inflation, which he said was brought on by the Federal Reserve devaluing the dollar and exacerbated by the disruptions of COVID-19. The answer, he argued, is not to slow down the economy and increase unemployment, but to stabilize the dollar by linking it to gold.

In closing, Forbes put in a plug for a flat income tax, which was the primary issue on which he campaigned in 1996 and 2000. He earned applause from the crowd with a remark that “Our federal tax code is a monstrosity,” later adding, “There is only one thing to do with this beast. I used to say bury it, but the EPA probably wouldn’t allow it because it is far too toxic.”

Following his remarks, Forbes took questions from the audience, including one student’s question about parallels between Trump and Nixon, and Biden and Carter. In his response, Forbes noted that the recent midterm election results came as a surprise to many in the GOP. “There are various reasons why the GOP did badly in these elections,” he said. “I’ll be very blunt here: Part of it was they underestimated the impact of the Supreme Court overturning Roe v. Wade.”

Forbes said the 2024 race will likely be very interesting because new figures may emerge as candidates, and he predicted that Biden will not be the Democratic candidate. “I think the GOP will win in 2024 and get these reforms that we’ve talked about in,” he said, “but I’m not going to bet my 401(k) on it.”

Matt Smith, president of College Republicans at Roanoke, said it was an honor to have Steve Forbes visit the College. “Mr. Forbes is an incredible speaker and really made his points in a clear and concise way, making sure that the audience could truly understand his points. His ideas on how to fix the economy and the inflation rate in this country were truly brilliant. I hope to continue to see speakers such as Steve Forbes come to Roanoke."

Even those who are not in alignment with Forbes ideologically said they appreciated the opportunity to hear a different viewpoint, which is one of the hallmarks of a liberal arts education.

“I wish he had elaborated on a few more points,” Stevenson said, adding, “As an economics student, I feel like I have to believe in the Federal Reserve. But it’s very important to get a different perspective other than mine.” 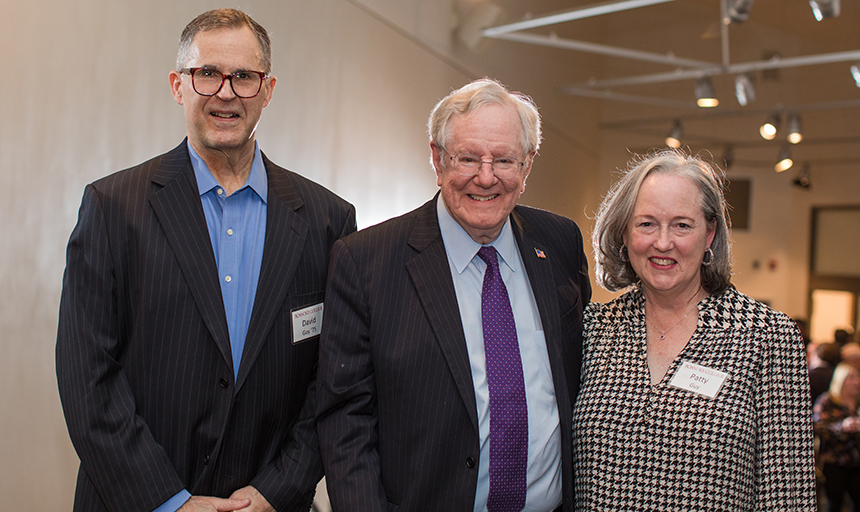 Forbes grabs a photo with David Guy '75, who sponsors the lecture series, and Guy's wife, Patty.