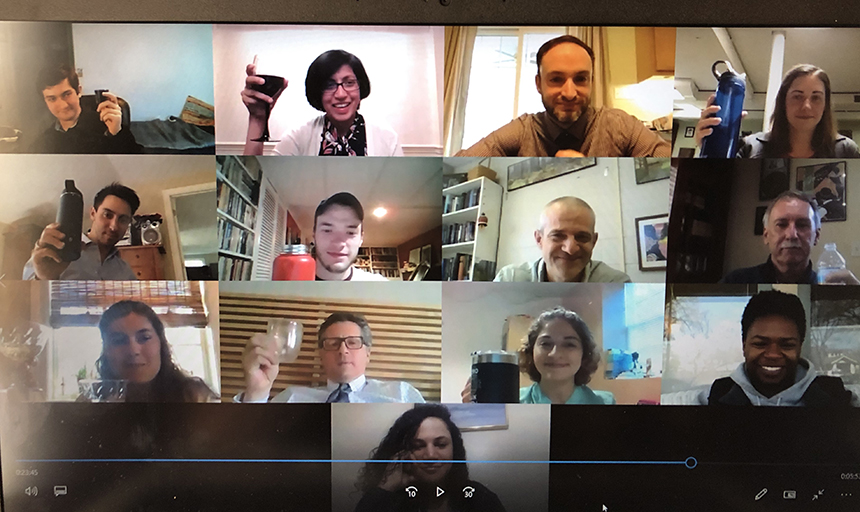 When Rosie Hamed ‘21 heard that her induction ceremony into Sigma Pi Sigma honors society was going to be held online April 13 instead of in person, she had her doubts.

“When they told us it was this virtual online celebration, I didn't think much of it. ‘It’s online, it’s not going to be anything like physically being there,’” Hamed said.

Then the ceremony began, celebrating the new inductees to this physics honors society, one of the oldest of its kind. Quickly, Hamed realized the ceremony would not be a cold, impersonal event.

Dr. Rama Balasubramanian, a professor of physics who is on sabbatical this academic year, did everything she could to make the induction ceremony fun and personal for the students.

“It was a way for them to think about what they commonly share in a classroom and outside of a classroom,” Balasubramanian said. “It's the memories they wanted to keep intact.”

Balasubramanian, who also goes by Dr. Bala, accomplished her goal. The ceremony included multiple speeches, and concluded with a slideshow that featured photos of the students together accompanied by physics-themed parodies of pop songs. Fergie’s “Fergalicious” became “Physalicious.” Jason Derulo’s “Talk Dirty To Me” became “Talk Physics To Me.”

The slideshow, in particular, made such an impression on Hamed that she immediately emailed Balasubramanian and asked for the link to the video.

Fellow physics professor Matt Fleenor said he was blown away by Balasubramanian’s dedication to the students, especially since she is currently on sabbatical. The ceremony was supposed to take place March 13, but was postponed when students were asked to leave campus to slow the spread of the novel coronavirus (COVID-19).

Dr. Fleenor said the fact that the event did eventually happen, and that it was such a success, is a testament to the ongoing connection between students and faculty.

“The Honor Society Zoom was such a bright spot and a celebratory rebound instead of just ‘one more thing’ to be canceled and forgotten,” Fleenor said. “The online event was such a needed moment for all of us, faculty and students.”

“It was a way for them to think about what they commonly share in a classroom and outside of a classroom. It's the memories they wanted to keep intact.”

They usually get that recognition at an in-person awards ceremony where they look back on the year and honor the standout students. That couldn’t happen this year, but ResLife leaders wanted to make sure they recognized the hard work of their students.

So on social media this past week, awards were handed out and pictures were posted. A Facebook photo gallery of students at work included more than 100 photos and garnered a bevy of comments and likes.

The awards are still coming out, but as of Tuesday, April 21, they were as follows:

Honors defenses continue
This time of year always includes the culmination of Honors Program Distinction projects, and that’s no different this spring. Even though everyone is working remotely, Honors students are presenting their defenses via video conference.

Dr. Chad Morris, director of the Honors Program, said 29 Honors Program Distinction project defenses are happening via Zoom this month. They’ve gone well, he said, as students and faculty have made the best of an uncommon situation.

“It can be a challenge to share the culmination of two or more terms of independent work via online conference, but our Honors seniors and their faculty committees are rising to the occasion,” Morris said. “These projects often make use of knowledge from multiple disciplines, allowing our students to demonstrate the value of liberal arts education alongside their strong preparation for the graduate schools, volunteer programs and employers that await them.”