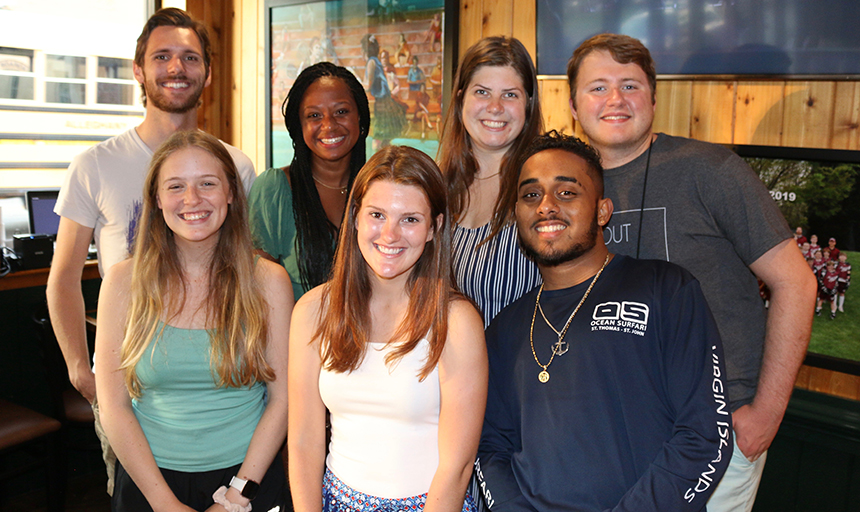 Over the past year, with many students taking classes from home and most classes being conducted virtually, Maroons have worked extra hard to stay connected to their classmates. Eight graduating seniors in particular were honored for their efforts.

"This was an unprecedented year due to the pandemic, and this was the perfect group of students at the perfect time,” Boucher said.

Boswell, in addition to serving as Student Government Association president, was a co-founder of Maroon Tube and served as operations manager. Maroon Tube is Roanoke’s student life YouTube channel that airs live events and video series and was founded in fall 2020. Boswell was the student activity coordinator and was the go-to IT/AV person for CAB.

Dalton was also a Maroon Tube co-founder and a producer with the channel. He was co-program director and a host for WRKE, the student radio station. He was the writer, director, actor and host for 2021 Basically Tarantino Film Festival Audience Choice-winning film “Graduation Shmaduation.” Basically Tarantino is Roanoke’s student film festival, which has steadily grown in popularity since its inception in 2016.

Hrdlick was the Colket Center building operations manager, a Student Activities fellow, and Roanoke’s Got Talent host who earned the moniker “original super fan” and “all-around party starter” during her time on campus.

Persad was an Office of Multicultural Affairs Creative Trailblazer and a photographer, videographer and editor.

Philleo ran the Virtual Outdoor Adventure Series on Maroon Tube, served as a WRKE host, and ran social media accounts for Outdoor Adventures, Roanotes and Virtual Orientation. She was the writer, director and actor in “Until It’s Not,” which won the 2021 Basically Tarantino Audience Choice award.

Ronan was a WRKE host, Brackety-Ack social media manager and writer, director and actor in multiple Basically Tarantino award winning movies. She was the writer and director of 2019’s “Something to Do” and 2021’s “In Her Echoes” which won Best Drama and Best Director.

Spickler served as editor-in-chief of the Brackety-Ack student newspaper for two years. Under her leadership, the Brackety-Ack never missed a deadline even while students were away from campus. She was a producer and host for “Hour of Dates” on WRKE and was an actress in “In Her Echoes,” winner of the 2021 Tarantino Best Drama award. She also worked for the Roanoke College Office of Marketing and Communications as a student writer.

“This was an unprecedented year due to the pandemic, and this was the perfect group of students at the perfect time.”

"We live in a media-centric world and students like Joyelle, Shakil, Chelsea, and Kaillee were able to utilize their writing, video, photography, social media, and marketing skills to keep students engaged and effectively communicate what's happening on campus," Boucher said.

The Student Activity Media Arts Hall of Fame was founded in 2015 and now includes 41 members. It was founded to encourage the growth of independent student media projects and productions at Roanoke College to enhance student life.

"We're proud and grateful for everything this group has accomplished at Roanoke College and we can't wait to see what kind of adventures and creative endeavors lay ahead,” Boucher said.