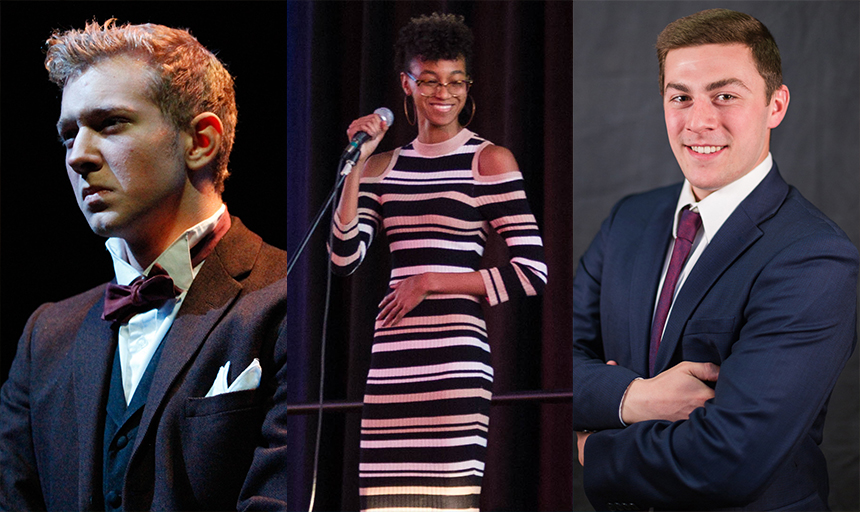 Five members of the Class of 2020 have been inducted into the Student Activity Media Arts Hall of Fame, which honors students who have contributed to the legacy of media arts at Roanoke College through the Student Activities Media Program.

The Student Activities Media Program gives creative student leaders an opportunity to create and perform much of the student activity programming on campus.

The 2019-20 inductees, and the work for which they received recognition, include:

Plaques honoring each of the new inductees will join those of previous Student Activity Media Arts Hall of Fame inductees on a wall in the Colket Center's Garrett Student Media Lounge. The first class was inducted in the 2015-16 academic year.

Like to see the works created or performed by the inductees? Check out the new Maroon Tube, a new YouTube channel that features a library of content for Maroons and by Maroons. The channel, which premiered this fall, is a virtual hub of student activities, events and programming. Featured content includes live footage from the Back Quad, streamed daily; films from the “Basically Tarantino” film festival, and more.

Current Roanoke College students and alumni are invited to use this platform as an avenue of sharing compositions, productions, dialogues, happenings, and more if they are of interest to the student body. Students who are active with campus programming, Campus Activities Board (CAB), WRKE, The Brackety-Ack or other media and organizations, may wish to integrate Maroon Tube into their activities, as might individuals who are seeking an opportunity to promote their personal works. This is also an opportunity to explore TV entertainment and production. Students are encouraged to try their hands at producing one-time or recurring shorts and shows.