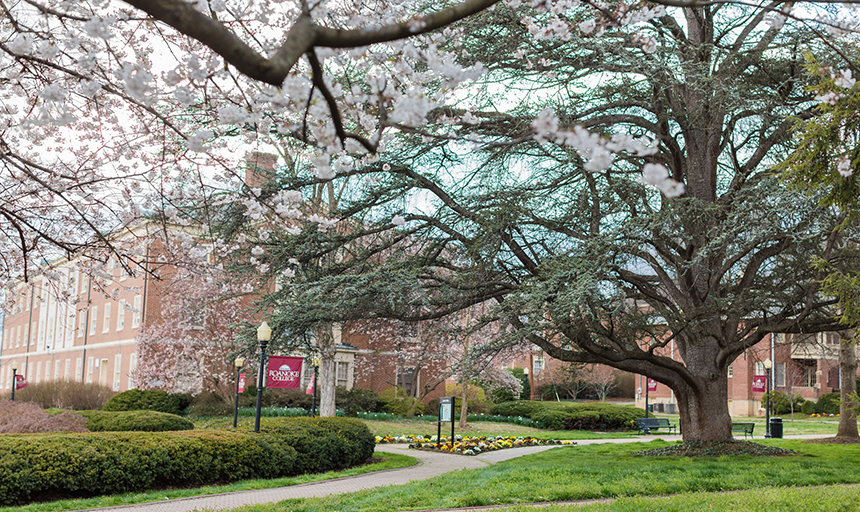 Roanoke College, with a broad variety of trees on campus, has been recognized by the Arbor Day Foundation as a 2019 Tree Campus USA.

The program honors colleges and universities, and their leaders, for promoting healthy trees and engaging students and staff in the spirit of conservation. Roanoke received word of the recognition — a first for the College — in February.

The original proposal for Tree Campus USA recognition, and research required to obtain recognition, began several years ago as a senior research project of Owen Foster '19. Foster formed a tree advisory committee and oversaw project work that included developing a project outline, and working with the Virginia Department of Forestry and the College's Buildings and Grounds crew.

After Foster graduated, Madeleine Youngman '21, a tree advisory committee member, assumed leadership of committee work, with vital assistance from Dennis McCarthy, a forester with the Virginia Department of Forestry.

"Without him, none of this would be possible," Youngman said.

Roanoke College is known for its beautiful trees. Dr. David Bittle, the College’s first president,  planted a number of trees, including one that symbolically represented more than 150 years of Roanoke’s commitment to an ethic of tree planting. That tree, referred to as the Bittle Tree and believed to have been planted in the late 1800’s, lived until it was removed in 2013 after sustaining significant damage from lightning. Several descendants of the Bittle Tree, a tulip poplar, stand on the Turbyfill Quad today.

The College is also home to a one-time “champion” tree. In 2010, a huge rock elm that stands between Fintel Library and the Alumni House measured in as a National Champion on the National Register of Big Trees. Its trunk circumference, height and average crown spread combined made it bigger than any other registered rock elm in the nation that year. The tree is thought to be more than 200 years old and therefore predates the College on its home along High Street.