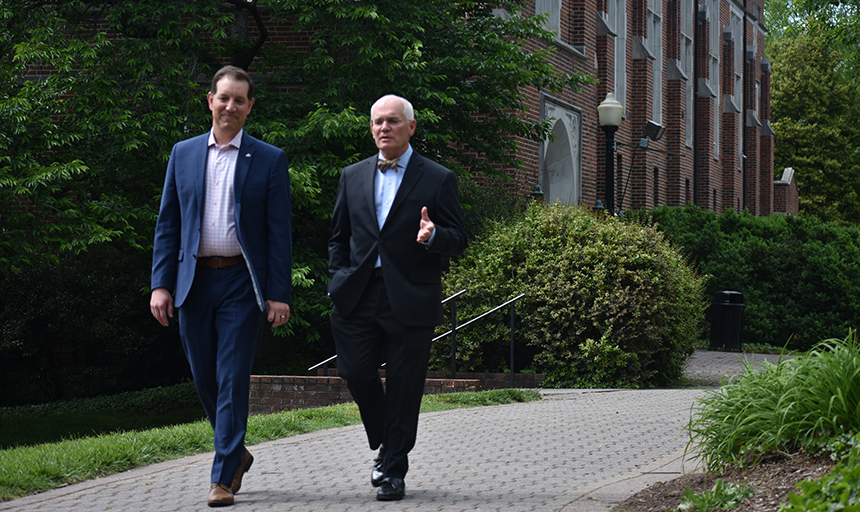 Published May 6, 2022 in the Richmond Times Dispatch. Reprinted with permission.

On May 7, as graduation season begins, a very special ceremony will take place in Salem. For the 15th time as president, Roanoke College’s Michael C. Maxey will help the next class make its launch into the world.

This year though, he’ll have more in common with the graduates: He’ll be one of them — in a manner of speaking. After 38 years with the college, and 15 years leading it, Maxey will retire this summer.

It’s impressive work, and Maxey is an impressive leader. Talk to the thousands of students, faculty and staff members whom he’s mentored, befriended and supported over the years, and you’ll quickly discover his achievements are a sidelight to his relationships with us.

One afternoon while working in the admissions office during my junior year at Roanoke College, a counselor asked me: Do you know what the most important word is?

As an English major, I felt eminently qualified to answer the question, but instead I listened. It’s your name.

Think about it, the counselor said. It’s the one word you pay attention to every time it’s written or spoken. It doesn’t matter in which language; it’s true around the world.

Names always have been important to Maxey, or as everyone who knows him calls him, “Mike.” I knew what names meant to him from our first encounter.

My family met Mike one evening in the fall of 1995, in a conference room at the Sheraton hotel in Towson, Maryland — just north of Baltimore. I was a senior in high school, and Roanoke College was holding a recruitment event for prospective students.

I knew no one; neither did my parents. I don’t remember anything about that evening, except one thing: Mike knew my name, and he knew my parents’ names.

In many ways, I still was a kid, and our interaction was the first time a stranger had offered me that level of respect. Mike’s small, genuine effort to learn my name let me know I was welcome. In retrospect, Mike probably knew me before I really knew myself.

I didn’t see until later in life that he was making a value judgment about me by learning my name. He believed my name was one worth knowing. In his quiet, unassuming way, he signaled to me I could be a person who is going places, a person with unbounded potential, a person with purpose. I couldn’t possibly articulate that at age 17, but the feeling was there, nonetheless.

The years that followed at Roanoke College were pivotal for me. I forged lifelong friendships (including with Mike), met my wife, gained the courage to be adventurous, made plenty of mistakes (thankfully, before the advent of social media), learned about other peoples and cultures, and started to understand and build my own values.

I also discovered my name wasn’t the only one worth knowing. Just ask any Roanoke College student, faculty member or staff member who has set foot on campus since 1985. Mike made an effort to know each of them.

Like so many teachers, his gift always has been to see the potential in each of us. It’s no surprise that his focus in recent weeks has been to telegraph the tremendous opportunity he sees in Roanoke College’s future.

Today, I marvel at the positive impact my Roanoke College classmates have had on the world around them. I’m equally awed by the skills and abilities I see in other fellow alumni and students alike.

It’s too simple to attribute these successes solely to our experience at Roanoke College. Yet, as Mike said during a speech to alumni a few weeks ago: “It’s easy to be successful when others want you to succeed.”

I couldn’t agree more. Mike has been one of my biggest cheerleaders from the day I met him. I have abiding gratitude for his unwavering belief in me, ever since that recruitment event outside of Baltimore 27 years ago.

Mike, I speak for thousands of Roanoke College graduates, and hundreds of faculty and staff members who are privileged to know you when I say: “Thank you!” Thank you for believing that our names are names worth knowing.

Your legacy far exceeds the dollars raised, buildings built and students educated in the last four decades. You put people and your community first. May we be so fortunate to achieve such a legacy.