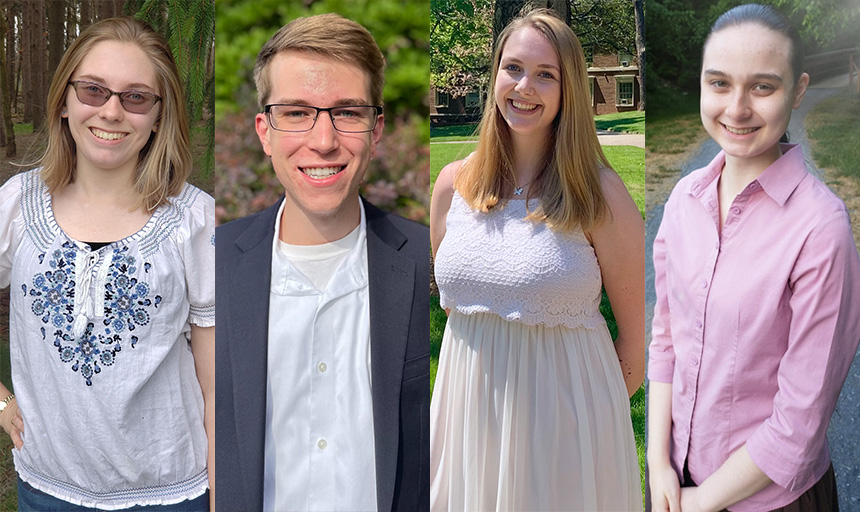 The Class of 2021's valedictorians are, from left to right, Stephanie Zemba, Eric Lee, Olivia Samimy and Abigail Workman.

Four members of the Class of 2021 earned valedictorian honors, the most ever. In both 2019 and 2020, there were three valedictorians.

This year’s valedictorians are Eric John Lee, an actuarial science major and economics minor from Archbald, Pennsylvania; Olivia Sara Samimy, a literary studies major and communications minor from Fredericksburg, Virginia; Abigail Elizabeth Workman, a mathematics major and Spanish minor from Roanoke, Virginia; and Stephanie Marie Zemba, a sociology major with a concentration on gender and women’s studies from Greensburg, Pennsylvania.

There’s also one salutatorian in the Class of 2021: Destinee Dawn Harper, a Spanish and literary studies major from Harrisonburg, Virginia.

During his time at Roanoke, Lee followed his interests, whether they related to his academics or not. He was involved in the Roanoke College A Capella Choir, the Wind Ensemble, the Roanotes a capella group, theater, garden club and the Alpha Phi Omega National Service Fraternity. He also did an Honors project about locations of craft breweries and pubs.

Lee said he’s honored to be one of the valedictorians, especially because, as he says, “Roanoke College is an institution that is full of extremely smart and talented students.” He credits professors and his fellow musicians for making him feel at home in Salem.

“My fondest memories of Roanoke College always go back to the people,” Lee said. “All of my professors have been so supportive and helpful in getting me to where I am today. They’re always willing to sit down and have a conversation about anything, not only their course, which really makes you feel like they want you to succeed in everything you’re involved in. Also, the Roanotes a capella group was where I made my first friends at Roanoke College and has turned into a true family over my four years here.”

“Eric is a rare combination of strong intellect, great work ethic, and nice demeanor — a perfect student,” Minton said. “He has taken advantage of what Roanoke College has to offer, and then took it to the next level. He’s a great guy with a great future.”

Samimy has taken advantage of every opportunity that has come her way, from fascinating research to studying away from campus. In addition to being a research assistant for Mary Crockett Hill ‘91, assistant professor of English, Samimy is in the Honors program and has worked for the Roanoke Review literary journal since she was a sophomore.

“I was able to use [Plath’s] unpublished poems and personal correspondence for my research,” Samimy said. “It was an incredible experience, and I'm so lucky that the Honors Program allows us to do really hands-on research like that."

She also participated in the Lutheran College Washington Semester Program, interning in the nation’s capital at Generation Progress, a progressive think tank. There, she worked on advocating for a variety of political issues that affect young people such as gun violence, racial justice issues, immigration and student debt.

Dr. Wendy R. Larson-Harris, professor of English and communication studies, has been Samimy’s advisor all four years, and witnessed Samimy utilize everything the school has to offer.

“She’s a terrific example of how our department’s three majors [Literary Studies, Communication Studies, and Creative Writing] can fit together to give our students a great all-around experience and background to go in any direction they might want to,” Larson-Harris said. “Olivia was a literary studies major, communication studies minor, and her Honors distinction project included writing a collection of original poems, so she really has connected with everything we have to offer.”

After graduation, Samimy will pursue a Master of Library and Information Science degree at the University of Maryland-College Park.

“My fondest memories of Roanoke College always go back to the people. All of my professors have been so supportive and helpful in getting me to where I am today. They’re always willing to sit down and have a conversation about anything, not only their course, which really makes you feel like they want you to succeed in everything you’re involved in.”

Workman combined her passions into an unusual pairing of studies: mathematics and Spanish. In addition, she worked at the Fintel Library for three years; served as an officer with the Math Club; worked as a Spanish Cohort Leader; and worked with Iris Myers, a lecturer and Language Resource Center director, during the summer to help Myers prepare for her Spanish classes.

Dr. Maggie Rahmoeller, assistant professor of mathematics, said Workman has an unstoppable drive and doesn’t get discouraged even though mathematical research can sometimes be frustrating.

“She is not the kind of student who just does the bare minimum — she always takes that extra step to find meaning and purpose behind the assignment or task,” Rahmoeller said. “She is one of those unique individuals who not only is incredibly smart, but also has a creative streak, which is noticeable in her coursework, extracurricular activities and research.”

Workman said it feels “surreal” to be a valedictorian and credited her faith for helping her through stressful times. She also saluted the overall sense of community at Roanoke.

“The emphasis on group work, community service, and self-reflection in my classes also helped me grow as a person,” Workman said. “All the faculty and staff here, from the housekeepers to the president, are supportive and understanding, and they are what make Roanoke College feel like home.”

Zemba, who is graduating in three years, came to Roanoke with a plan in mind and executed it to perfection. Dr. Meeta Mehrotra, associate professor of sociology and public health, said Zemba hit the ground running and never slowed down.

“She’s an incredibly hard worker,” Mehrotra said. “She has a great deal of intellectual curiosity. She’s a really keen sociologist. She came in with the idea that she wanted to do sociology and wanted to learn as much as possible.”

She did just that. Along with her studies, Zemba was involved with several research projects through the Research Fellows program, Summer Scholars, and independent studies. She also worked as the sociology department assistant.

Her Summer Scholars project was about the way religion comforts immigrant elders. Zemba was accepted into the American Sociological Association Honors Program and presented her research at the ASA’s annual conference in 2020. Conducting interviews for that project was one of Zemba's fondest memories at Roanoke, she said, along with working closely with professors and taking hikes in the Blue Ridge Mountains.

After graduation, Zemba will enter the sociology Ph.D. program at Syracuse University and has her sights set on becoming a college professor. She had close relationships with her professors at Roanoke, including Mehrotra and Dr. Kristi Hoffman.

“It is a great honor to be recognized as one of the valedictorians, and I am excited to be able to share this accomplishment with my friends, family, and mentors who have supported me throughout my time at Roanoke,” Zemba said.

Harper has pursued an international set of interests at Roanoke. She majored in literary studies and Spanish, and attended a Fulbright Summer Institute at the University of Sussex in England. She currently works as a volunteer coordinator for Casa Latina, a local nonprofit that provides resources to the Roanoke Valley’s Spanish-speaking population. She also served as chapter president of Sigma Tau Delta, an internationally-recognized English honor society and interned at DC Fray Magazine.

Through her experiences with Casa Latina and her own background, Harper penned an essay that won the Office of Multicultural Affairs’ Bonilla Legacy Essay Contest. In the essay, Harper wrote about her time at Casa Latina and about her own roots, talking about her humble beginnings on Kerns Road in Dayton, Virginia, near Harrisonburg.

She again reflected on her past when she learned she earned salutatorian honors.

“I come from a rural area and am a first-generation student, so I have always felt like I needed to prove myself at Roanoke College,” Harper said. “For me, being named salutatorian means I’ve finally proven to myself that hard work does, in fact, pay off, but I’m incredibly humbled as well. There are a lot of less-fortunate people living on the same street I grew up on, struggling through poverty, drug addiction, and life in general, and being named salutatorian is yet another reminder to not forget my roots and to continue to help others that never received the resources they needed to escape that next generation on Kerns Road struggling to make ends meet.”

Harper has been accepted to West Virginia University’s English Master’s program and intends on studying Latina American literature. She hopes to ensure these stories are better represented in English-speaking classrooms. She hopes to eventually get her doctorate and teach at a collegiate level.