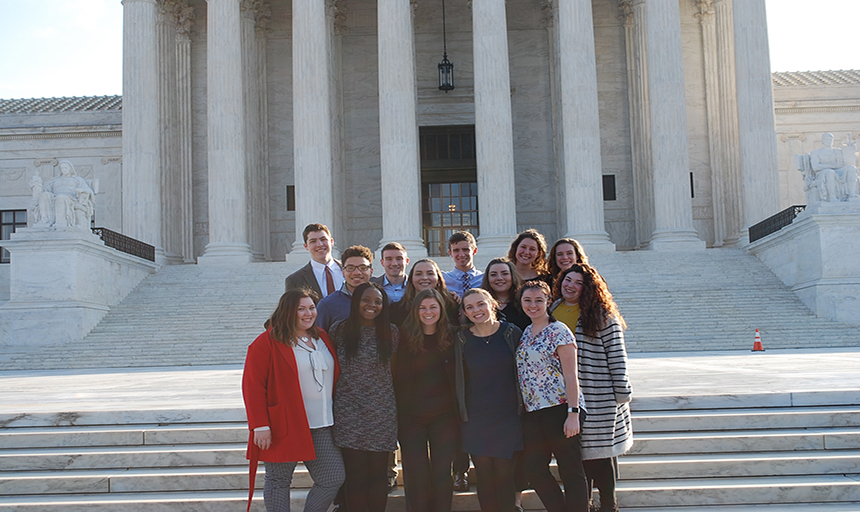 The 2018-19 academic year marks Roanoke College’s 32nd year providing unique internships in the nation’s capital through the Lutheran College Washington Semester program. A record 15 RC students are participating this spring semester in the Washington, D.C.-based program, whose mission is to strengthen students’ skills, deepen their understanding of the professional world, and gain valuable work experience.

Unlike previous semesters, the start of this semester’s program coincided with the longest government shutdown in United States history. As a result, three students’ internships were postponed.

“It’s a terrible feeling to work closely with students for over a year on their plans to attend the Washington Semester program and then, at the last second, find out that a government shutdown might prevent their internships from going forward,” said Dr. Todd Peppers, Henry H. & Trudye H. Fowler Professor in Public Affairs at Roanoke who serves as the College's LCWS program coordinator. “We had a contingency plan in place to find these students other internships, but I was very relieved when the shutdown ended.”

Kierra Burda ’20, said she and two other students whose internships were postponed, volunteered at places such as D.C. Central Kitchen, a community kitchen and meal distribution nonprofit, and Chefs for Feds, a feeding site where furloughed government workers and their families could get free meals during the shutdown.

“While the uncertainty of the length of the shutdown was nerve-wracking, we made the most of it while we waited for it to end and our internship coordinators to contact us about a new date,” Burda said. A business administration major with a minor in American politics, she experienced only a slight delay in starting her internship in the Education Division of the Federal Judicial Center.

“While I am a Business Administration major…my future plans include law school,” she said. “Interning at the Federal Judicial Center and learning about the court systems is directly helping me prepare for my future career.”

Several other students shared their experienes so far in the program:

Katie Wojciechowski '20, a political science major with a minor in Communication Studies, is an intern in the office of U.S. Sen. Time Kaine, of Virginia.

"I speak with constituents, give tours of the Capitol building, do research for staff and attend briefings," Wojciechowski said. "Being a political science major and communications minor, the work I am doing is extremely relevant not only to my studies but to Roanoke's liberal arts curriculum. Dr. Peppers was a huge influence in me applying for LCWS. Everyone who has attended spoke so highly of the program; it really is the experience of a lifetime."

“I’ve been anticipating attending the Lutheran College Washington Semester since my freshman year at Roanoke because I knew that I wanted to get real-life work experience while also developing my interests in government and political science. This semester is helping me develop professionally and personally.”

“I’ve wanted to participate in the LCWS program since I was a freshman,” Kitt said. “It’s a great way for me to apply the knowledge and lessons I’ve learned in the classroom…I am able to watch policy decisions happen in real time as legislation is passed by some of our most prominent lawmakers/political figures. In addition, it gives me insight into what goes on behind the scenes; what it takes to make our governmental agencies function to their best abilities.”

Peyton Holahan ’20, a political science major with a minor in U.S. history, is interning in the office of U.S. Rep.  Kathleen Rice of New York.

“For my internship, I answer the calls of constituents, attend hearings, give tours of the Capitol, and research various legislative topics,” Holahan said. “I’ve been anticipating attending the Lutheran College Washington Semester since my freshman year at Roanoke because I knew that I wanted to get real-life work experience while also developing my interests in government and political science. This semester is helping me develop professionally and personally.”

Other Roanoke students participating in the Lutheran College Washington Semester program this spring include: