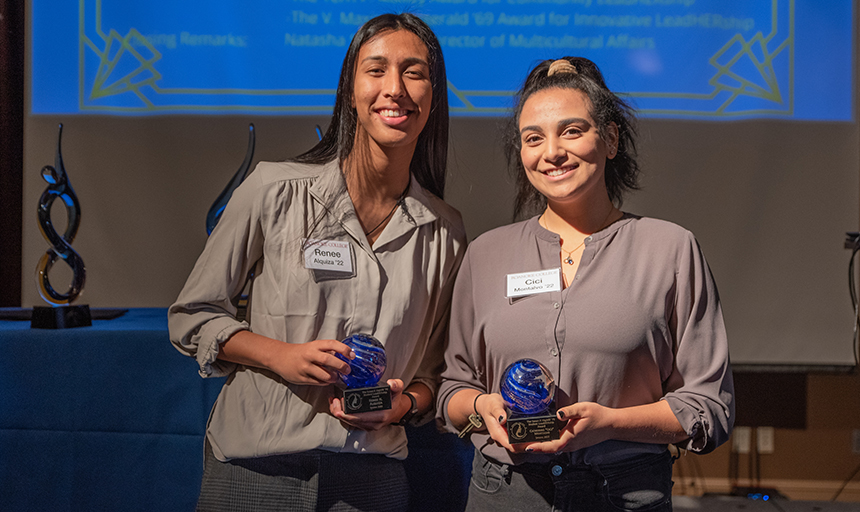 During the inaugural Women in LeadHERship Awards ceremony Wednesday, eight members of the Roanoke College community were honored for their contributions to Roanoke College.

The award ceremony is intended to recognize leadership and to encourage, inspire and uplift the women in the Maroons community. The Office of Multicultural Affairs, the Roanoke International Office, and Community Programs worked together to establish the awards. They received more than 30 nominations from students, alumni, faculty and staff.

Shelley Olds ‘03, who competed for the United States in the 2012 London Olympics, was the keynote speaker. Olds was the captain of the women’s soccer team when she was a student at Roanoke and is a member of the College’s Athletic Hall of Fame.

Olds spoke to a packed room at the Wortmann Ballroom on campus, taking attendees on a crash course — literally — through her cycling career. She detailed all of her falls and struggles, and showed how she got back up every time.

“Dare to dream,” Olds said. “Go out and find the spark that lights the fire in you. There will always be barriers and obstacles to our success, but we are truly in control of our own destiny.”

The awards were named after prominent women from Roanoke College’s past and present. The Susan Highfill ‘79 Student LeadHERship Award is named for Highfill, the top scorer in Roanoke women’s basketball history. Highfill participated in the 1980 Olympic Trials after her record-shattering college career before embarking on a career as a counselor and therapist.

Highfill was in attendance Wednesday to present the awards to Renee Alquiza ‘22 and Cici Montalvo ‘22. Alquiza is a communication studies major and captain of the women’s basketball team. Montalvo is a biology major who has served as president of the honors program, president of Omicron Delta Kappa, and has strived to create an inclusive and diverse environment in these organizations and at the College as a whole.

The Terri P. Maxey Award for Community LeadHERship is named for the College’s current first lady. Maxey has worked in admissions and financial aid at four colleges, including Roanoke, and has been a positive and supportive figure for innumerable students over the years. Maxey, who was in attendance Wednesday to present the award, exemplifies community and makes every student feel welcome.

Lt. April McCadden of Campus Safety, known among the student body as “Miss April,” was the staff recipient of the award. Dr. Lisa Stoneman, associate professor and chairperson of the education department, was the faculty recipient.

Meghan Kelly ‘13 was the alumna recipient. Kelly, who mentors current Roanoke students, is a longtime volunteer with New York State Intergenerational Network, teaching classes on citizenship to recent immigrants and in conversational English as a Second Language to adults who want to become more proficient in the English language for both personal and professional use. She currently is a Ph.D. candidate in Industrial Organizational Psychology and is a claims service leader at Allstate Insurance.

The V. Maxine Fitzgerald ‘69 Award for Innovative LeadHERship is named for the College’s first Black student. Fitzgerald’s courage and determination have made her a key figure in the College’s history, and though she died in 2021, her legacy remains.

Filmmaker Pamela Pierce ‘72, the president and CEO of the nonprofit film studio Silver Bullet Productions, was the alumni recipient. Dr. Andreea Mihalache O’Keef, associate professor and co-coordinator of the peace and justice studies program, was the faculty recipient. Natasha Saunders, director of multicultural affairs, was the staff recipient.

Organizers hope the event will become an annual tradition at the College, to regularly recognize the powerful, influential, compassionate and inspirational women in the Roanoke community.

“Dare to dream. Go out and find the spark that lights the fire in you. There will always be barriers and obstacles to our success, but we are truly in control of our own destiny.”

On Renee Alquiza: “Being a true leader, she does more than lead others. She dedicates herself to becoming the best example of success in every sport, club or activity she becomes involved with, reaching out for help when needed, and always finding ways to help and encourage others along the way.”

On Cici Montalvo: “She is a compassionate, dedicated leader who seeks to work alongside others as we make RC a more diverse, inclusive space inside and outside the classroom.”

On Lt. April McCadden: “She is someone who since her arrival in 2016 has consistently worked to develop meaningful relationships with students and colleagues throughout the campus community. She reaches out to all students in unique ways with genuine care and empathy.”

On Dr. Lisa Stoneman: “Her leadership exemplifies a commitment to inclusivity, relationship-building, and mentorship. She exhibits a calm assuredness in her leadership. One knows she is in a leadership position by her competence, direction, and ability to let faculty in her department lead.”

On Meghan Kelly: “She serves as a model of professional and academic success with a deep passion for relationship building and genuine mentorship.”

On Pamela Pierce: “Not only have she and her non-profit provided an outlet for the Native American Tribes to tell their stories, they are now being shared and documented for generations to come. She saw a void in education and documenting culture, and sought to change it. Her “silver bullet” has blazed a trail when no one has been before.”

On Dr. Andreea Mihalache O’Keef: “She is being nominated for this award for her dedication to outstanding research and innovative teaching, but also because she is a creative thinker and problem solver. She is a person who sees a challenge and does not back away from it. She confronts the challenge and uses her keen perception to analyze possible solutions.”

On Natasha Saunders: “She embodies the life-long connections and commitment that everyone in the Roanoke College community strives for. …She is an incredible support system, and Roanoke College is blessed to have someone like her on staff and represent our school.” 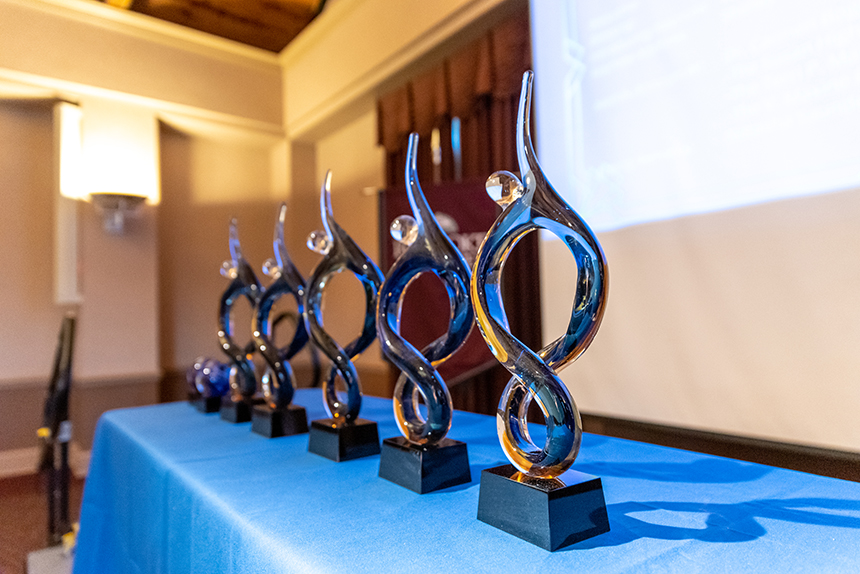 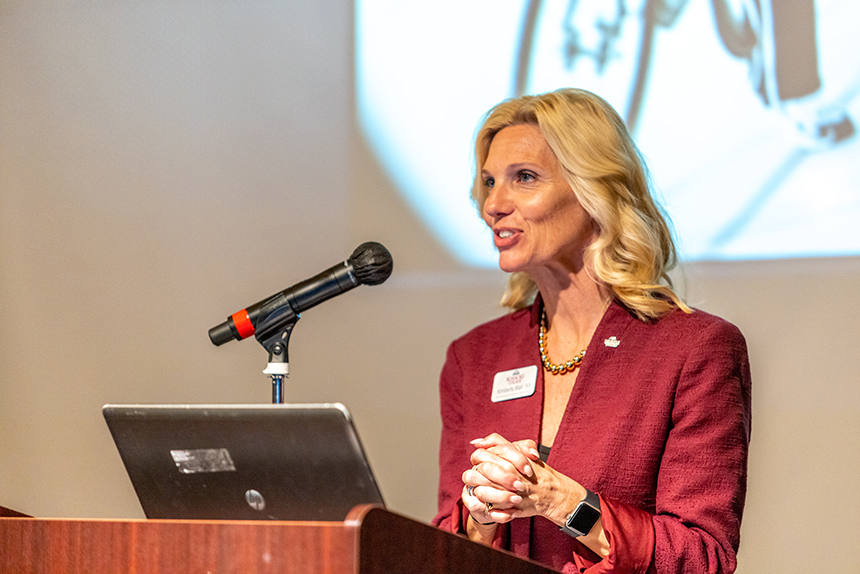 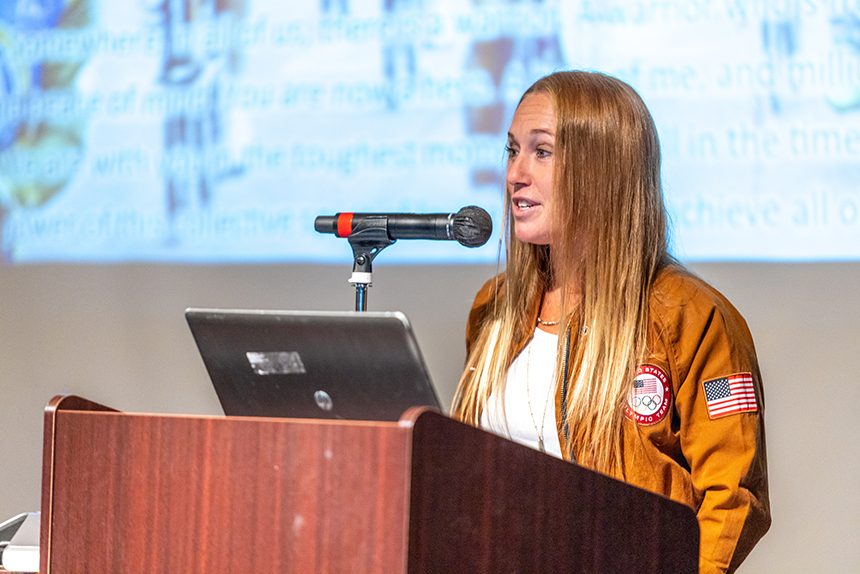 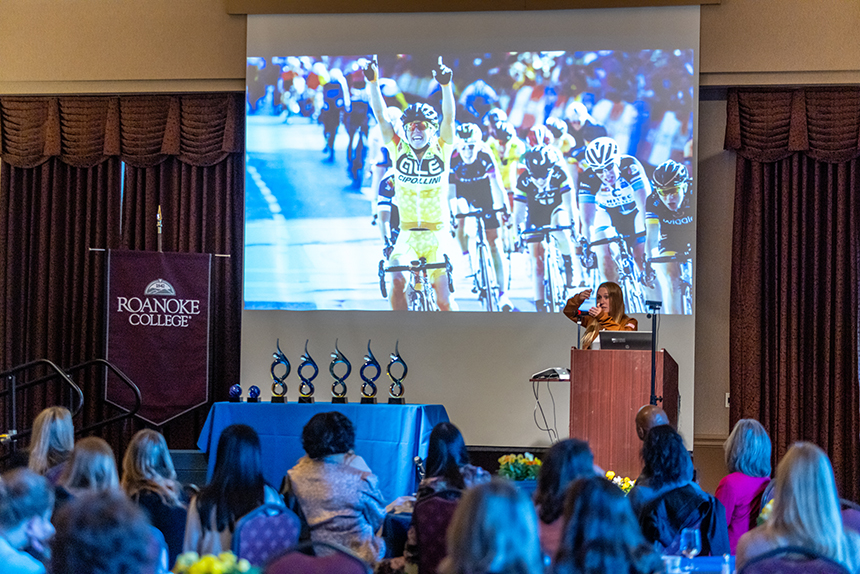 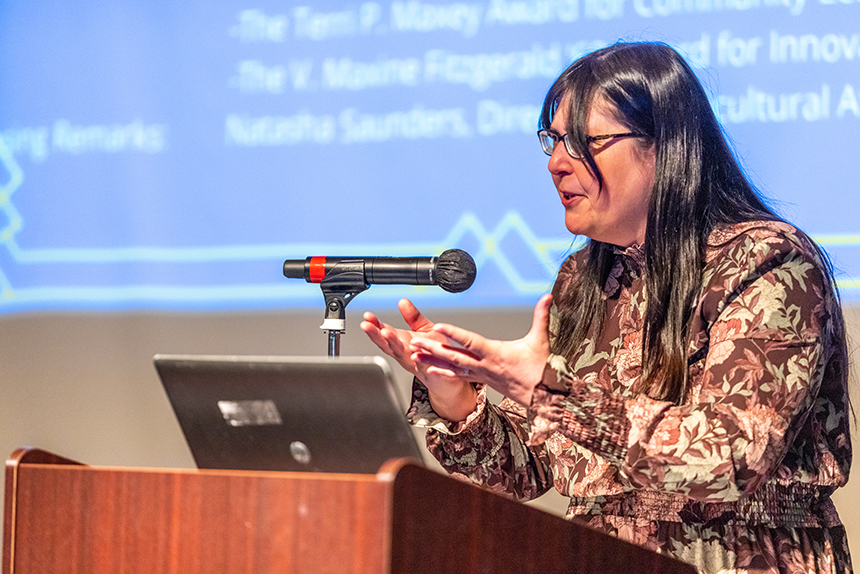 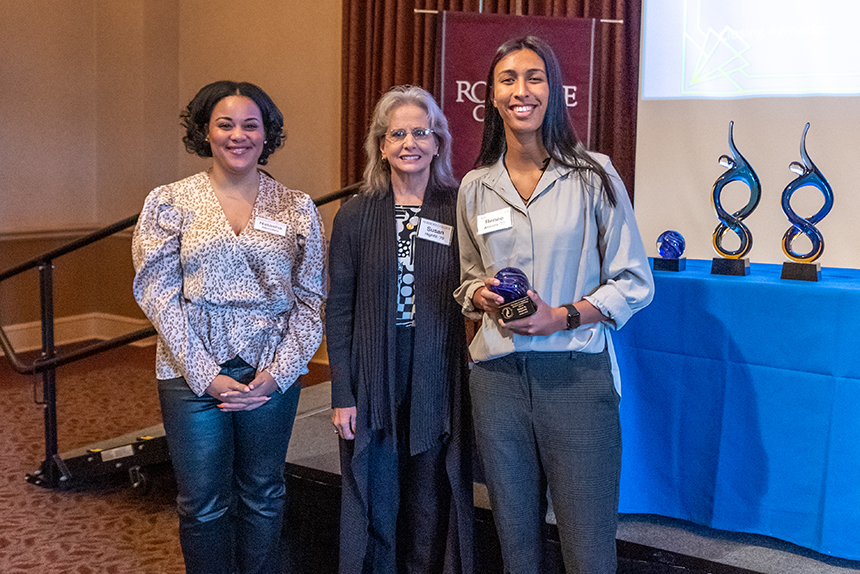 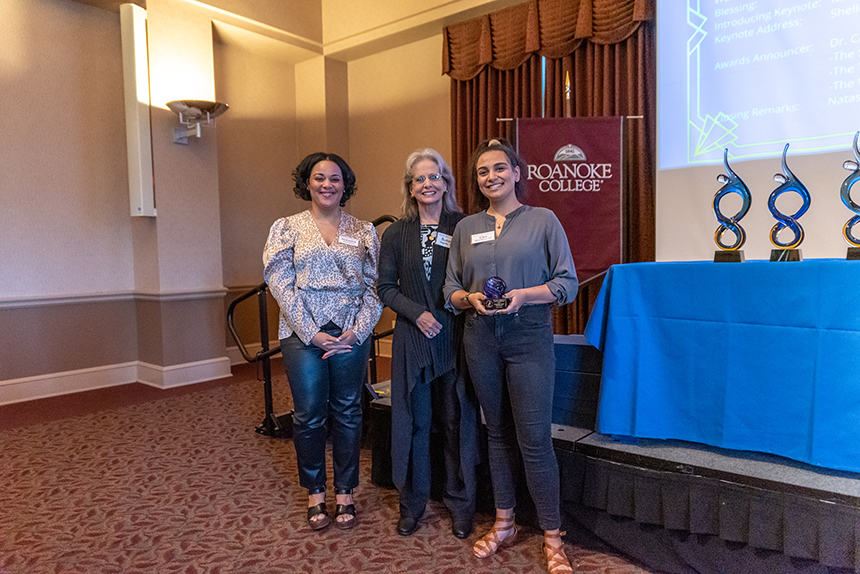 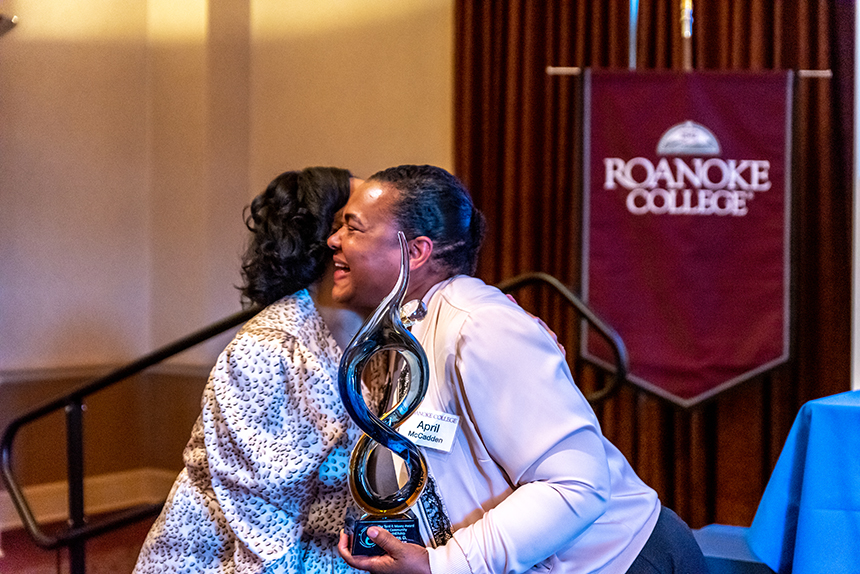 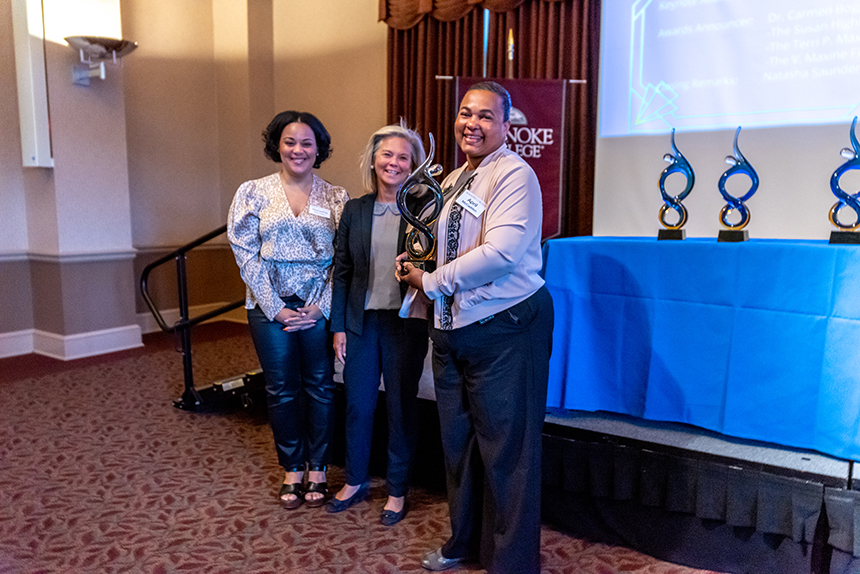 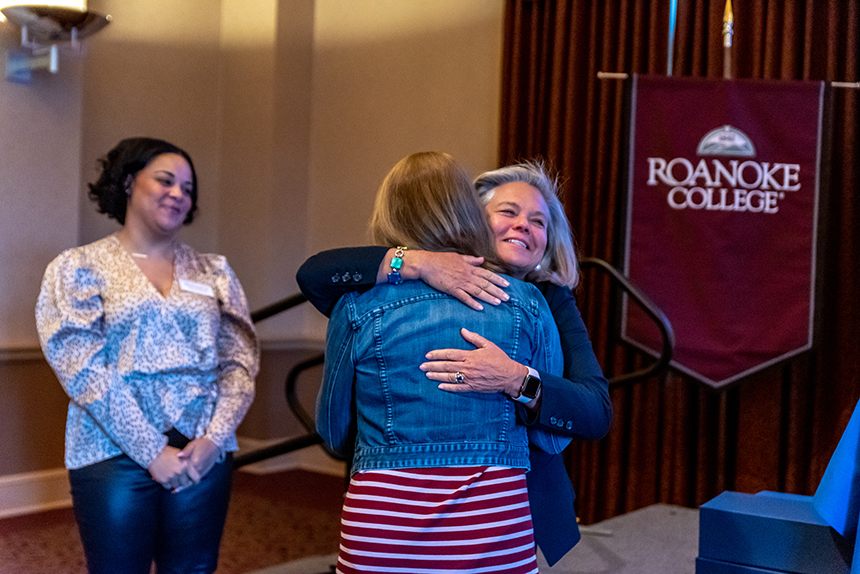 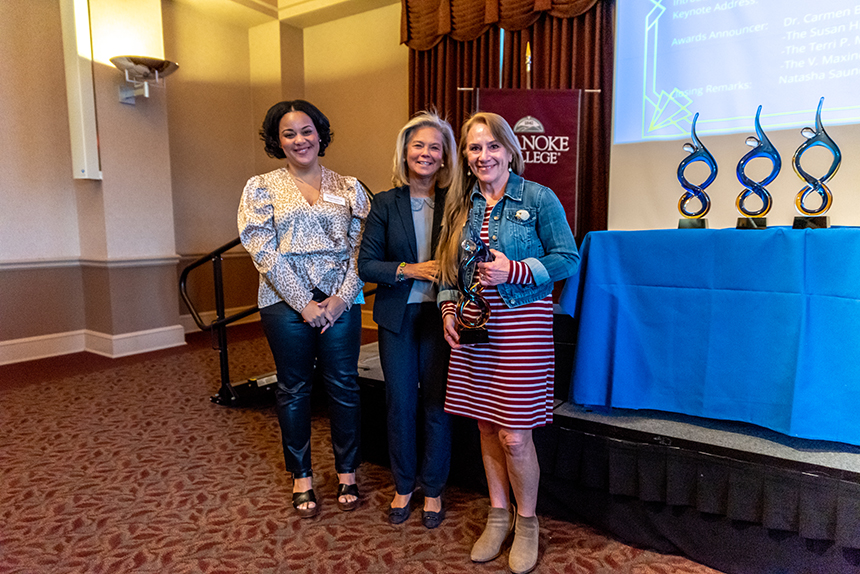 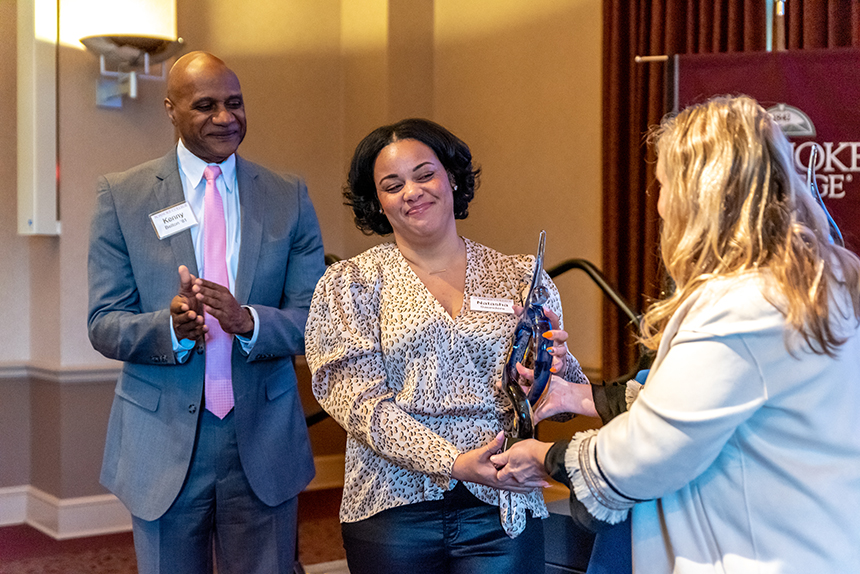 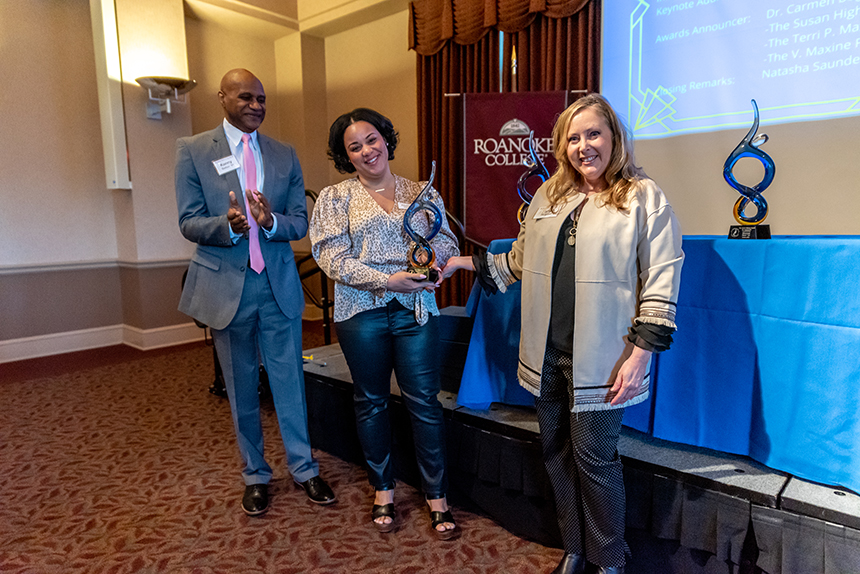