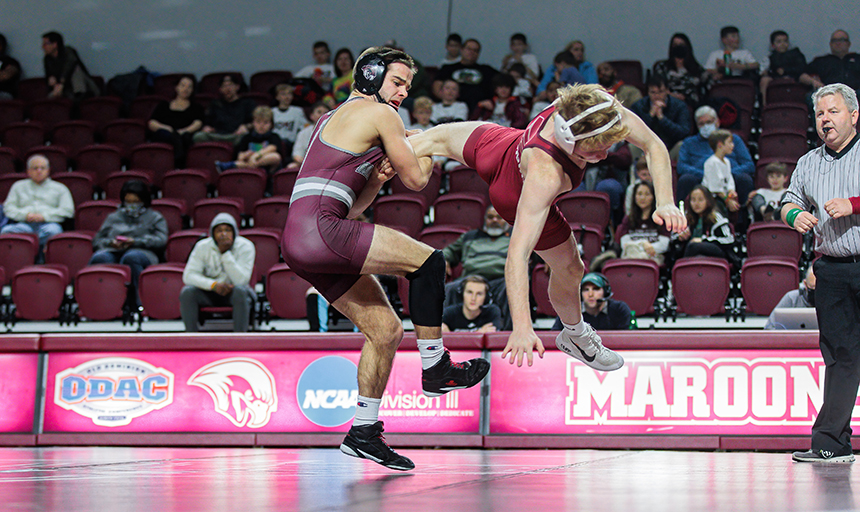 Webb Drescher '25, left, in action at the Cregger Center in February. Photo by Ryan Hunt '18

The inaugural wrestling season at Roanoke College is now in the books and has been deemed a first period pin.

Coach Nate Yetzer is excited about the present and future state of the program.

“I knew Coach Yetzer when he was at Ferrum,” Sallah said. “He loves to win but he also cares about his wrestlers. Wrestling is really about who you are after school. He’s a good person who wants to see us succeed after we put down the shoes.”

After winning the regional at Lycoming College in Williamsport, Pennsylvania, Sallah competed in the Division III national tournament in Cedar Rapids, Iowa. He won his first two matches before losing in the quarterfinals. He battled back in the consolation bracket to earn a spot in the “blood round,” where he took a 2-1 decision over Daniel Surich of The College of New Jersey to finish seventh and become the first Maroon All-American in wrestling.

“I really enjoyed wrestling at Roanoke College,” said Sallah. “The academics are tougher, but the school is nice, the people are kind, and it’s a great environment.”

Sallah was one of 40 wrestlers to compete on the first Roanoke College team, with no seniors on the roster. Also placing in the region were Jarrod Pominville ’25 with a fourth place at 149 pounds, Mac Cafurello ’25 with a sixth place at 125 and seventh places in the region went to Morgan Robinson ’24 at 141 and Jack Campbell ’25 at 165.

“We have a lot to offer at Roanoke College. I'd say we're in the top three in the nation in Division III with our facilities. With our academics, this is the kind of place kids are looking for.”

Yetzer has another strong class coming in next year, and he’s excited about the future of the program. He had wrestlers from nine different states sign up for his “prospect camp,” where kids come see the school and learn about the program.

“Our prospect camp sold out,” he said. “We have a lot to offer at Roanoke College. I’d say we’re in the top three in the nation in Division III with our facilities, and we get great support from the school. With our academics, this is the kind of place kids are looking for.”

The local high school coaches would agree and are happy to have a college program right in their own backyard.

“The Roanoke College wrestling program has been a great boost for the sport in the Roanoke Valley,” said Jason Cline, wrestling coach at Glenvar High School in Roanoke County. “From kids participating in camps to watching the Maroons compete during the season, it's been a real boost to the visibility of the sport in this area. The coaching staff there is just top-notch. I'm excited to see where they take this program over the next few years. It's going to be fun to watch.”

The Maroons had two home dual matches in their inaugural season and also hosted the Southeast Open and the Star City Classic. The first home match at the Cregger Center was against Washington and Lee University, and a large and vocal crowd showed up for the event.

Yetzer has one more goal that he hopes he can accomplish next season, and with the success of this year’s team no one doubts he can.

“My goal when I took this job was to one day fill up that building for a match,” said Yetzer. “I know we’re going to do it.”