About the Colket Center 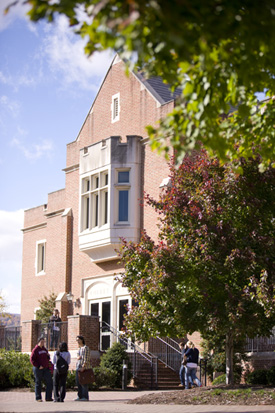 The Colket Center is the new campus center at Roanoke College, named in recognition of Mr. and Mrs. Tristram C. Colket Jr. of Paoli, Penn. Mr. and Mrs. Tristram C. Colket Jr., are the parents of Bryan Dorrance Colket '98. The family's $5 million challenge gift motivated our $5 million in additional gifts for 86 donors whose gifts were $10,000 and more. The Colket Center was a major priority of the College's capital campaign, entitled "The Difference." The $12 million Colket Center is the largest building project in Roanoke College's 158-year history.

The dining area was named Sutton Commons in honor of Donald M. Sutton who served as a staff member at the College from 1956 to 1983. Inside the Colket Center, several major donors chose to honor Roanoke College staff who had been meaningful in their lives. The Mamie Patterson Conference Room is named for a retired professor of Spanish. Another meeting room is named for Fran Ramser and Jean Beamer, who are retired from the physical education department.

The building project began in May 1999 immediately after graduation. The challenge for the contractors, architects and college community was to complete the building on the same site as the previous Sutton Student Center while providing meals and dining space to students during the academic year.