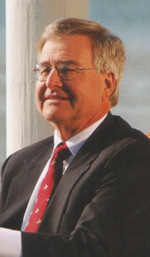 When David Gring arrived at Roanoke College in the summer of 1989, he found a campus in the beginning of a major library renovation project and a sesquicentennial celebration. He embraced both with enthusiasm. Gring's inauguration repeated several components of David Bittle's inauguration in 1853. The sesquicentennial year was a festive occasion with the dedication of the newly renovated and named Fintel Library; the production of the play "Fashion," popular in Roanoke's founding year, 1842; Founder's Day; a Sesquicentennial Ball; and the publication of a new college history, Dear Old Roanoke, by Dr. Mark Miller of the History Department. The final event-Alumni Weekend-featured a spectacular fireworks display.

The end of the celebration also marked the end of the 1992 campaign and a time to refocus and redirect Roanoke's energy. The 2002 Campaign, "The Difference," brought direction. Besides the completion of Fintel Library, the campus saw the addition of the Belk Fitness Center, the renovation of the old Roanoke County Courthouse, renamed Francis T. West Hall, one of the busiest classroom buildings on campus; and the building of the new Colket Center and Sutton Commons. The Commons claims bragging rights for the quality of food offered to the students.

Improvement of the student body became a primary focus of the Admissions team. Average SAT scores increased. Many of the scholarships were awarded based on academic competition. With the amount of financial aid having improved dramatically, applications have grown to 2,900 for 485 freshman spots in 2004. The student body of 2003 was nearly 10% minority (doubled from a decade earlier) and represented 38 states and 24 countries. About 40% of Roanoke's graduates went on to attend graduate or professional schools.

During Gring's tenure, the percentage of full-time faculty holding terminal degrees increased from 84 % in 1992 to 95% in 2004. Faculty scholarship improved as well, with greater numbers presenting papers at conferences and publishing books and articles. Faculty-student interaction has increased with an emphasis on independent study, internships, and the Summer Scholar program. The student/faculty ratio stands at 14:1.

A major focus of the 2002 Campaign was to increase the endowment. When Gring became president in 1989, the endowment figure stood at $25.2 million. As Gring left office in 2004, that figure had grown to an incredible $93.9 million. Gring and the Resource Development staff undertook an aggressive campaign which included substantial giving by the Board of Trustees as well as alumni and other friends of the College. At the end of the campaign, the alumni giving figure was 38%.

Roanoke's reputation in the academic world has improved over the last decade as can be seen in its ranking in U.S. News & World Report. Once found in the list of Best Regional Colleges in the South, Roanoke in 2003 had climbed to the list of Best National Liberal Arts Colleges.. But the crowning touch for the College came in the spring of 2004 when Roanoke was granted a chapter in the prestigious Phi Beta Kappa, one of only 270 colleges in the nation. That quest, begun in 1952, had finally come to fruition.

As David Gring finished his final months as Roanoke's president, a flurry of activity began. Major mounds of dirt were moved to provide for the building of three new residence halls as well as a new and attractive campus entrance; Trout Hall, built in 1867, was undergoing a major renovation and expansion. Gring left the College much improved over what he found in 1989. He also left a College that will not rest on its laurels, but will continue to improve the quality of education it provides its students.