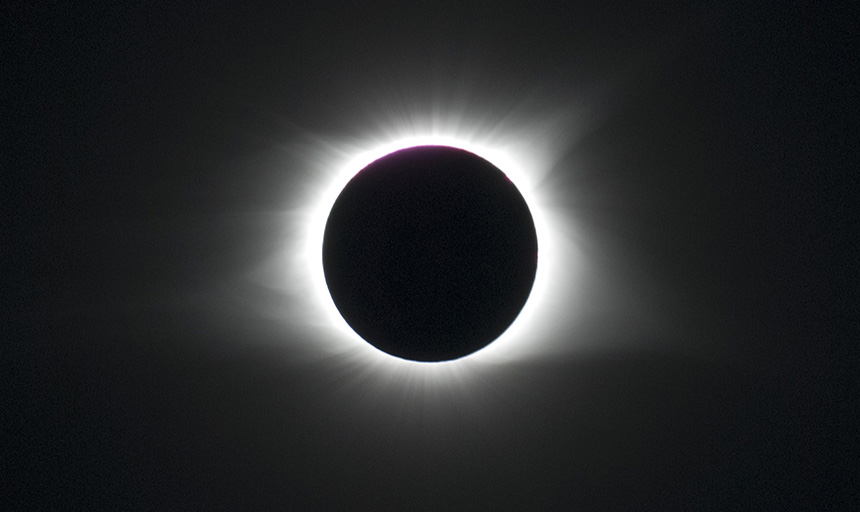 Wonder in the sky

Months before total solar eclipse fever swept North America, weeks before digital downloads of Bonnie Tyler's 1983 "Total Eclipse of the Heart" began to soar, Dr. Matthew Fleenor was making plans to witness one of the true splendors of nature.

In May, Fleenor, associate professor of physics at Roanoke College, responded to an invitation from the education office of Great Smoky Mountains National Park to become an eclipse ambassador. The western half of the park, which straddles the border between North Carolina and Tennessee, was located within the path of totality, the zone across the United States where the sun was totally blocked by the moon at the height of the eclipse. The park was hosting a series of public events and was recruiting college faculty and students to help visitors safely view the total eclipse.

"Because there were not a significant number of universities and professional astronomers within the totality region of western North Carolina, an invitation was extended to other astronomers and institutions within the local region," Fleenor said.

He wasn't completely sure what serving as an "eclipse ambassador" involved, but went ahead and contacted the park's education office. He was completely sure, however, that he and students wanted to view a total solar eclipse, and that the Roanoke Physics Group-composed of physics faculty, majors and minors- has a strong record of science outreach for the public. The group, for example, has an ongoing partnership with an elementary school in Salem and regularly holds Elementary STEM Nights at three elementary schools in the Roanoke Valley.

On Aug. 18, a group that included two Roanoke College faculty members; six students, including physics majors; and one recent physics graduate, piled into a College van and headed for the Ocanaluftee Visitors Center entrance to Great Smoky Mountains National Park, just outside of Cherokee, N.C. Each group member had been designated an "eclipse ambassador," having completed the required training, conducted by Fleenor.

The group spent the night of Aug. 20 in tents pitched at the maintenance field across the river from the visitor's center, where they had access to refrigeration, showers and bathroom facilities.

"For everyone in the group, it was our first total solar eclipse and our first eclipse outreach event," Fleenor said.

On Aug. 21, the group set up six telescopes, outfitted with solar filters and aligned to the sun's path through the daytime sky. Roanoke students and faculty helped the public locate the sun through the telescopes and assisted them in understanding the features of the sun and the eclipse dynamics.

From 10 a.m. to 4 p.m., approximately 300 people viewed the eclipse at various stages before, during and after totality.

"The [Greater Smoky Mountains National Park] staff was courteous and helpful throughout the entire event, and we were all given 'staff' T-shirts in order to officially identify us," Fleenor said. "We had complete access to store our equipment prior to the event. Our equipment worked flawlessly and the hours of planning beforehand paid huge dividends."

Fleenor noted that all of the students worked diligently to set up and break down the equipment, and helped the public understand eclipse dynamics and solar phenomena.

“It was a historic day for the Roanoke College physics program, as it was for many of the people who visited our telescope observation of the eclipse."”

The day of the eclipse, Fleenor blogged from the awe-inspiring event. What follows is his account of how the day of the Total Solar Eclipse progressed:

5:30 a.m. I awoke to a beautiful clear morning with Venus clearly visible as a "morning star" in the East.  I couldn't believe that we had planned to arrive on this morning more than three months ago, and it was finally here. And, it was a clear morning in the Smokies in August.

6:30 a.m. Set-up for positioning of telescope stands near the Apple Barn at Oconaluftee Visitor Center, where over 1,000 public viewers were scheduled to arrive.  Six Roanoke College telescopes (Celestron NexStar 5" and 6") were arranged before I went back to ready the students.

9:00 a.m. Alignment process of telescopes initiated to track the sun through the sky. Solar filters were fitted, default settings were overrode, and tracking of the sun commenced. It took us over two hours to properly align all six scopes for tracking. During alignment of one of the telescopes, I actually saw the International Space Station pass across the surface of the sun. (I originally saw it merely as a "satellite" and only realized later that it was in fact the ISS.)

11:15 a.m. As I was walking to a final bathroom break before the truly amazing events began, I heard my name "Fleenor ... Matt Fleenor!"  It was Marwood and Wendy Larson-Harris, both faculty friends from Roanoke College, and their family.  How exciting that part of our community had traveled independently to share in the eclipse event with us. It was fun to share in the event with folks that I see on campus.

12:00 p.m. Two distinct sets of sunspots were visible on the sun's surface. We were able to begin to show the public the different sunspots and discuss with them the nature of the sunspots and their size. Sunspots are due to the convective nature of the sun (think, hot blobs rise while cool blobs sink), and when a blob rises it actually appears dark on the surface. Sunspots are approximately the size of the earth (some smaller and some larger) so that was exciting to relay to the public.

1:06 p.m. = C1 C1 is the first point of contact between the moon and the sun. It was absolutely exhilarating to observe through our telescopes the black silhouette of the moon occluding the sun's bright disk. The temperature at C1 was 88 degrees F. It was a "normal" hot and sunny afternoon.

2:00 p.m. Visibly, the brightness was beginning to change and the temperature was noticeably falling. Many families and students would visit and revisit the telescopes. One of our biggest goals for the group was to attach David Matheny's Nikon camera to a telescope in order to get full resolution images of the eclipse. After troubleshooting some minor issues, it was a great pleasure to see David's image of the eclipse on the laptop screen that was connected to the camera.

2:30 p.m. As the setting was certainly turning darker and cooler, it was certainly a surreal experience. I had seen a video on the atmospheric phenomena called "shadow bands." We set out a white sheet in order to observe and hopefully capture these shadow bands.

2:34 p.m. Just a few minutes before C2, when the moon's disk totally occludes (blocks) the disk of the sun.  Shadow bands were visible even though they couldn't be captured on video. Park rangers reported the sounds of crickets as the dimming of sunlight was definitely visible, and the chickens on the farm actually bedded down because they thought the sun was setting. It was definitely getting dark and we were preparing for our first total solar eclipse. The excitement was palpable.

2:35:50 p.m. = C2 In some ways it was just like what you see and read about, yet I was actually experiencing it and so it was unlike anything I had ever seen or read about. As I looked up into the sky without my glasses, I saw Venus once again visible in the day sky just to the west of the sun, as it had been that morning prior to sunrise. Then I did something one should never do at any other time than totality: We removed the solar filter from the telescopes and looked through the eyepiece.  Solar flares and prominences (large protrusions from the sun's surface) were visible with the naked eye through the telescope. It was absolutely breathtaking. The large white coronal ejections (wispy and cloud-like) were clearly visible with the naked eye and the telescope.

2:36:52 p.m. = C3 Solar filters back on our telescopes, and again we began to see the shadow bands. I looked up to watch Venus again disappear as the sun's brightness drowned out all other light. I had just experienced my first total solar eclipse.  The temperature was now 75 degrees F, 13 degrees cooler than it was prior to C1, and approximately 20 degrees cooler than it would be normally at that time.

3:00 p.m. We continued to get some more visitors with discussion from a variety of ages-elderly, parents and youth. Although a few telescopes were packed, it was still exciting to observe the moon's path across the sun's surface and to reflect on what had just happened. It was extremely gratifying to hear many of the park staff show their appreciation for the outreach event. One family of two smaller children from Pittsburgh thanked us several different times for making the eclipse experience meaningful for their family.

4:00 p.m. = C4 At this time, the sun continued its uninterrupted path across the daytime sky. The eclipse was officially over as David took the last picture with the camera-attached telescope. We loaded up the van and began our journey back to Salem. I must have clapped my hands audibly 10 times within the next two hours as we rode in the car. My reflection on the eclipse was so vivid that it was worthy of response.