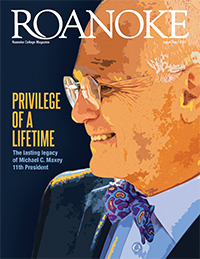 Michael C. Maxey will retire at the end of July after 37 years at Roanoke College, the last 15 as College president.

His legacy will include much more than the speeches he’s given, or the plaques inscribed with his name, or the many bow ties he’s knotted. If you talk to those who have been involved with the College during his years at Roanoke, it is clear that he’s made a lasting impression on people in all corners of the Maroons community and beyond.

President Maxey is always sure to mention that nothing he has done as Roanoke’s 11th president has been alone. He gives a great deal of credit to those who came before him. But as much as others might have helped him along the way, it’s undeniable that he has played a key role in keeping the College on a strong path during his presidency, even through difficult times.

We invite you to flip through for more about President Maxey’s lasting legacy, and other featured content, in this issue of Roanoke College magazine.