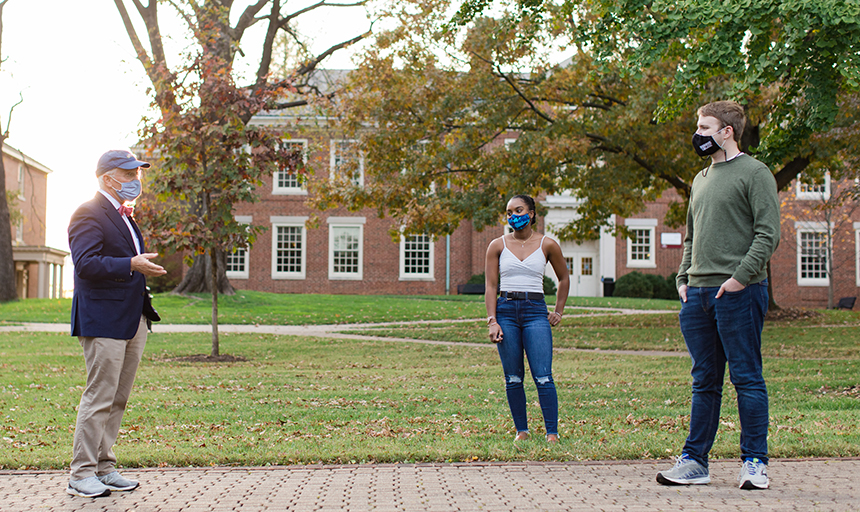 Assistant Dean of Students and Director of Student Health Sandy McGhee walked slowly over to Catawba Hall, clad in full personal protective equipment (PPE) and carrying medicine. It was the first Friday afternoon of the fall semester, and there was already a spike in COVID-19 positive tests. Students who tested positive were ushered to Catawba Hall.

The plans for the semester had been in place since the summer, and McGhee’s department was prepared. Those plans had been all on paper, though. When McGhee spoke to the nervous, wide-eyed students, it all became real.

“Going over to the isolation house a couple times and interacting with a couple of those students, being able to calm their fears, I can remember those pretty vividly,” McGhee said.

Those students all recovered, and so did Roanoke College.

After that first surge in cases, students took the situation seriously and things started to settle down. For the latter half of the semester, the number of active cases on campus was almost always in the single-digits. The story of how Maroons worked together to stay safe in the fall began all the way back in March 2020, when students were sent home as the pandemic began its frightening spread around the country.

Planning for the fall semester was a complex, ever-changing process. It all began March 11, when students were sent home amid the rapid spread of the pandemic. Interim Dean of Students Tom Rambo said there were so many unknowns at the time with how the virus spread, how quickly it spread and how to treat it that campus leaders didn’t want to take any chances with the safety of the campus community.

With students at home, Rambo said, campus leaders could sit down and plan for the fall. It proved to be a difficult task with advice from public health officials changing by the day. Director of Residence Life Jimmy Whited said he and his colleagues sought to develop a plan that covered a variety of outcomes while also keeping that plan open to change as more information became available.

After months of daily meetings and collaborating with health officials and other higher-education institutions’ health departments, Roanoke College had its plan ready for the fall. Rambo said that even though the plan received high marks from the State Council of Higher Education for Virginia (SCHEV), the plan still had to be changed in the weeks leading up to the semester.

The plan was for a phased return to campus, with new students coming first and the other classes following them every couple weeks. A week into the semester, that plan also had to be changed due to the spike in cases.

“No matter how much planning we do, without (students) actually doing it and following through, we would have never been successful.”

As McGhee said, it was one thing to plan for taking care of students on campus, but it was totally different to see it actually happening. It took a team effort to help care for the students in isolation and quarantine. Faculty and staff did everything from deliver meals to students to going out and getting their favorite soda for them.

The initial spike in cases was a wake-up call for students, Senn Boswell ’21 said. Boswell, who was Student Government Association president in 2020, said there was speculation early in the semester that students would likely be sent home again.

“That attitude kind of created a culture where people would rather party and get the fun while they can in the two weeks they were here,” Boswell said. “Once we were able to stay for the first several weeks and people realized that it was possible to make it through the semester, the rhetoric died down and things became more certain as people stopped partying when they realized they were going to be here for more than just a couple weeks.”

A big factor in that shift, Whited said, was the arrival of the seniors.

“Seniors would have done anything to be back on campus,” Whited said. “They did not want their senior year to happen at home from their parents’ attic or basement or what have you. Once we got the seniors on campus, things calmed way down.”

It all came down to commitment from students, Whited, McGhee and Rambo all agreed. They all praised the maturity of the Maroons who came to campus in the fall. After the initial scare, students buckled down and took the necessary precautions. Even when they were outdoors and a safe distance away from other people, many students still wore masks. They obeyed the rules and followed the plan that was in place.

“No matter how much planning we do, without them actually doing it and following through, we would have never been successful,” Whited said.

Carrying success into the spring

The College had no documented community spread in any academic buildings in the fall. In other words, it’s unlikely that any student or faculty member has gotten the virus while in an academic building. McGhee said there were also no documented cases that stemmed from time spent at the campus dining hall or fitness center. Extensive safely measures have been put in place in both of those locations to ensure they stay open while keeping students safe.

Rambo said he and his colleagues learned quite a bit from the fall semester and are looking forward to welcoming students back Feb. 8. He’s happy the fall went so well, but isn’t ready to celebrate quite yet.

“We’re not ready to do the touchdown dance,” Rambo said, “but if we have to gear up and battle again because of an outbreak, we’re better prepared for the spring than we were for the fall.”

Boswell said this academic year has been difficult for many students, but having people back on campus in February will help boost morale.