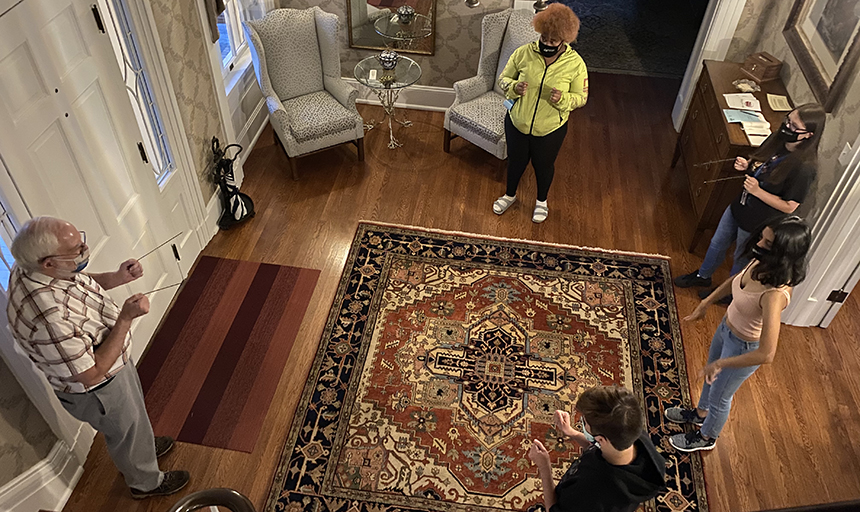 Dr. Tom Carter, left, teaches students how to use dowsing rods to locate paranormal activity in the Monterey House on Sept. 23.

Students continue tradition of searching for ghosts in historic house

Zoey Nichols ‘24 was standing in a dark corner of the Monterey House basement when something caught her eye.

It was a flash of light in the dark, cold room. She turned to look and saw a baseball-size light hovering two feet off the ground on the stone wall next to her. It stayed there for a moment and then disappeared.

Nichols was there as part of Dr. Tom Carter’s popular Ghosts and Human Perception class, where students go into the historic house (which the College owns) and look for evidence of spirits lingering in the home. Detailing the incident the following day, Nichols said the hovering light in the basement stuck with her and had her thinking for hours.

“It freaked me out to begin with, and it made me think a lot last night,” Nichols said. “I thought it was really interesting, because I didn’t think anything would happen — nothing like that at least. Maybe a few noises or something. I didn’t expect to actually see something.”

Nichols joined a long line of Roanoke students who have had a brush with the paranormal in the Monterey House during the past 14 years. Since 2006, Carter’s class has come to the historic house and attempted to find signs of spiritual energy left behind by the Monterey’s previous inhabitants.

Carter, associate professor of English and communications at Roanoke, has dozens of stories of paranormal experiences from what he and students have witnessed over the years. Sometimes there’s visual phenomena, like a lamp growing brighter and dimmer on its own, or a flash of light. Sometimes there’s a narrow gust of wind through the house. Sometimes a student walks into a room and immediately feels an intense sorrow.

The first question people usually ask about the house, Carter said, is “Who died in the house?” That’s not the most important question, he believes.

The Monterey House has federal, state and local historic landmark status. The large, Greek Revival-style house was built in 1853 for Powell Huff, a Salem businessman. In its long history, Monterey has served as a hotel, a rooming house, a fraternity house and was a private residence from the 1920s until the college purchased it in 2002.

“I didn’t think anything would happen — nothing like that at least. Maybe a few noises or something. I didn’t expect to actually see something.”

Ghosts and Human Perception is an extremely popular class that serves as an example of Roanoke students exploring topics and having valuable experiences outside their major. Nichols, for example, is considering Business Administration as her major. She has always been interested in the paranormal, though, stemming back to watching “Scooby-Doo” cartoons as a young child.

The night following Nichols’ ghostly experience, she and three other freshmen accompanied Carter into Monterey. They used dowsing rods — commonly referred to as divining rods — to locate energies in the house. If one of the slim, forked metal rods turned in their hands, they knew there was energy nearby.

Students were able to locate one area where they felt the rods moving in their hands. But there was nothing more intense than that — until the very end of their time in the house.

The students were hesitant to go to the dark basement, but ventured down there together to end the night. They shuffled around and explored the dark corners with their phone flashlights. They startled each other a few times but didn’t experience anything like Nichols had experienced the night before.

On his way up the stairs, Matt Biggs ‘24 felt a tugging on his hoodie sweatshirt. He thought it was Rae McClure ‘24, trying to scare him, but he turned and saw McClure was on the other side of the room.

It’s easy for students or visitors to feel a draft or hear a sound in the house and say, “Oh, it’s nothing.” But Carter is adamant that there’s always an explanation, as reflected in what has become a catchphrase for him over the years: “It’s never nothing.”