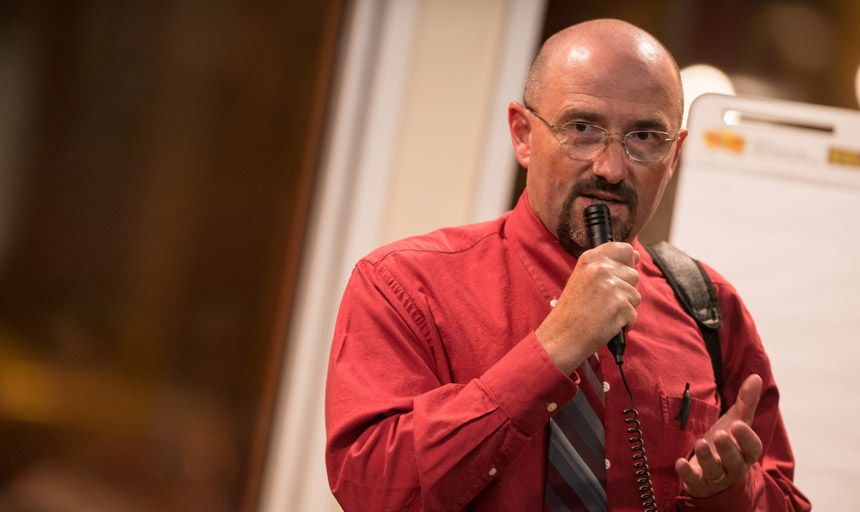 The 2016 presidential election is more than a year away, but aspiring candidates already have started the debate on everything from taxes and the economy to immigration and foreign policy.

In next year's pivotal race for the White House, every issue is in play-with the likely exception of gun control. Unless there's a mass shooting that garners national attention between now and Election Day, says Harry Wilson, a nationally renowned expert on firearms politics and policy, the question of gun control likely will remain off the table. In his new book, "The Triumph of the Gun-Rights Argument: Why the Gun Control Debate Is Over," Wilson, Roanoke College professor of public affairs and director of the Institute for Policy and Opinion Research (IPOR), explains why the issue essentially has been decided for at least a generation.

"There will be continuing skirmishes over this, but in the big overarching battle, we're in a period where there's nothing there," Wilson says.

Despite efforts by groups like Everytown for Gun Safety to place universal background checks on state ballots as referendums, Wilson argues that a pair of U.S. Supreme Court decisions and an intensity gap between pro- and anti-gun groups has effectively dissuaded national elected officials from taking any large scale action on guns.

"People will use the issue when it's to their advantage, but this is not going to be a cornerstone of Hillary Clinton's campaign," Wilson says. "If we assume Clinton is not able to turn out young voters and African-American voters like Barack Obama did in 2008 and 2012, she'll have to attract more working-class whites to win."

“ You don't attract working-class white voters to your campaign by talking about gun control.”

Paired with a previous book on the topic and a forthcoming two-volume reference covering the history of gun debates in the United States, "The Triumph of the Gun-Rights Argument" cements Wilson's reputation as a national expert on the topic of gun control.

"This book is the best university-level introduction to the gun issue," says David B. Kopel, research director of the Independence Institute. "Wilson provides persuasive political analysis of why gun control advocates have not achieved nearly as much as they have aimed for, despite strong poling support for some gun control measures."

"That was the perfect storm in favor of gun control," Wilson says. "You've got the most horrific mass shooting we've seen, in the sense that the victims were young children. You've got a president who's pushing for it, and public opinion supporting expanded background checks. Despite all that, virtually nothing happened at the federal level in terms of gun control legislation. It's not a topic in Congress at all. You don't even hear President Obama talk about it anymore."

In a survey conducted the year after the shooting, IPOR found that more Virginians believed poor policies to deal with mental illness, an inability to stop those who want to kill others and violence in the media were to blame for mass shootings than were poor enforcement of gun laws or weak gun laws. But while a majority favored expanding background checks, gun registration, and banning "assault rifles" and magazines holding more than 10 rounds, respondents were also pessimistic that new laws would reduce gun violence.

Another survey conducted in January showed Virginians believed it more important to protect the right of Americans to own guns than to control gun ownership, similar to results in a national survey conducted by the Pew Center a month prior.

"If Sandy Hook doesn't result in something seriously being done at the national level, it's over," Wilson says. "If you can't win when the deck is stacked that strongly in your favor, when are you going to win?"

"The Triumph of the Gun-Rights Argument" also examines a pair of related decisions by the Supreme Court of the United States that definitively affirmed the right of individuals to bear arms. District of Columbia v. Heller in 2008 protected an individuals right to bear firearms in federal enclaves, or property within states subject to federal jurisdiction, while 2010's McDonald v. Chicago extended that projection to state property. All of this leaves the question of why the issue of gun rights has become so calcified. The answer, Wilson says, boils down to politics.

"I think what happened at the national level is the Democrats saw gun control was a losing issue for them," Wilson says. "In 2000, Al Gore lost West Virginia, which had up until that point in time been a very solid Democratic state. He lost his home state of Tennessee, and he lost Bill Clinton's home state of Arkansas. He lost those states not because of economic issues but because of social issues, one of which was guns. Gun control didn't do [2004 nominee] John Kerry any favors either. The national Democratic Party decided this is a losing issue." The reason gun control is a losing issue stems from two gaps between those who favor and those who oppose gun control laws: intensity and numbers.

Wilson also has written a two-volume reference set due later this year. Entitled "Gun Politics in America: Historical and Modern Documents in Context," the book tracks the history of guns as a political issue within the U.S.

A native of Aston, Pennsylvania, Wilson earned his bachelor's degree in journalism and master's in political science at Pennsylvania State University, and his Ph.D. in political science at Rutgers University. Wilson came to Roanoke College in 1986. As director of the Institute for Policy and Opinion Research, he's overseen surveys in Virginia that regularly attract media coverage and the interest of political candidates. Wilson received a Fulbright Award in 1995.