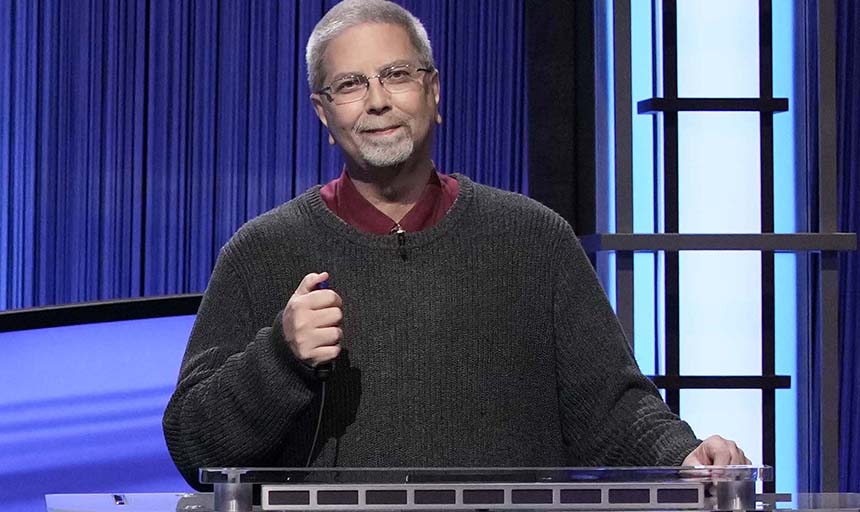 Hollis proves to be a tough competitor in Jeopardy! semifinals

Dr. Gary Hollis’ second appearance on Jeopardy! Professors Tournament was Dec. 15 against Ed Hashima, a history professor from American River College in California, and Deborah Steinberger, a French literature professor from the University of Delaware. Hollis, of course, is a chemistry professor at Roanoke and the coach of Roanoke’s Quiz Bowl team.

Hollis proved to be a tough competitor. He was behind early in the match, but came roaring back after a good run of responses to the nuclear physics category. Hashima did well in the Southern California history category and regained his lead going into Final Jeopardy! None of the three had the correct answer to the Final Jeopardy! question. Hashima got the win and now moves on to the two-night tournament final round, starting tonight.

Hollis again shared behind-the-scenes stories with an interactive campus audience attending a watch party in Massengill Auditorium. He talked about wardrobe questions, as he wore the same sweater in the Dec. 15 episode that he wore in the first episode on Dec. 6. He did take ties and wore them, but they were not very visible under his sweater. Contestants also had several COVID tests, and the show was careful about COVID protocols. Security was tight on the set as well.

Overall, Hollis's biggest challenge was getting the buzzer right. He said Hashima kept beating him to the buzzer on questions he knew well.

“I knew Dua Lipa,” Hollis said. “I knew the Bangles and I certainly knew Taylor Swift,” he exclaimed. “But you’ve got to get that buzzer and it’s hard.”

“The hardest part about not winning,” Hollis said, “is not being able to play Jeopardy! anymore.”

Hollis dreamed of appearing on Jeopardy!, and he achieved that dream – twice.

“My Jeopardy! journey ended but I did realize a dream,” Hollis said during the watch party on Dec. 15. “I got the opportunity to do something I have wanted to do for most of my life. That’s my wish for all of you. May you be blessed with dreams becoming reality.”

Hollis held his own and represented Roanoke College in fine fashion. Maroons around the country were proud to watch him compete!