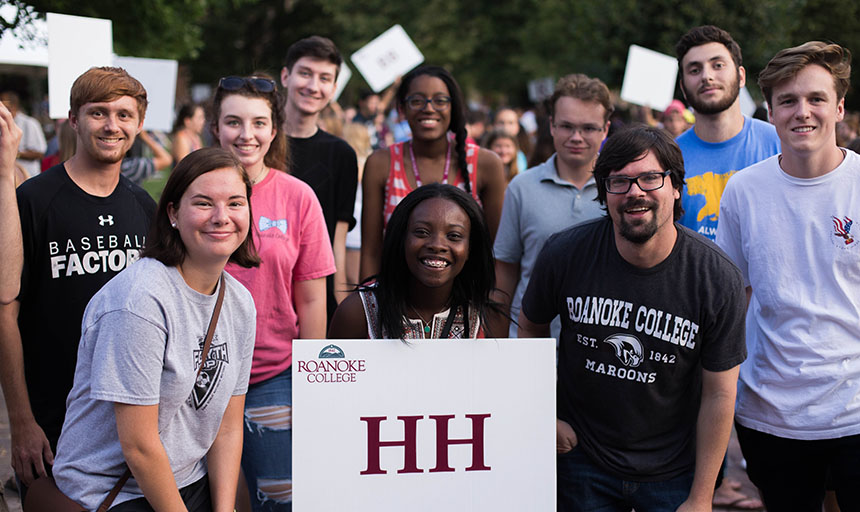 We want to welcome Roanoke College's 584 freshman and 54 transfer students! These new Maroons represent 28 states, include six class valedictorians, and were chosen out of a record 5,125 applications!

This year, long standing traditions will continue as well as some new additions to allow first-year Maroons to get to know each other.

Here are some of the events happening after and during daily orientation group activities. The entire schedule for both students and parents can be found on the Orientation page:

Induction Ceremony and College Welcome: New Maroons are ushered into the College with the President's welcome, where President Maxey and a few select upperclassmen talk to the newest class on Roanoke College and what makes it so unique. New students will become official Maroons upon signing their names in the College's record books.

Picnic Dinner: Maroons and their families are welcomed to the back quad for a picnic catered by the Colket Center.

22 Take Over!: A game night hosted by student affairs will allow new students to meet other Maroons and relax after their first day at Roanoke.

R-House: For the 13th year, new Roanoke students will strap on hard hats, pick up hammers and start building a house on campus. Each year during orientation, groups of first-year students work in shifts to build the beginnings of a Habitat for Humanity home for a needy family. This year, construction will take place in the Hawthorn Road parking lot, adjacent to the College's track. Students will build portions of the house from Sunday, August 26 through Tuesday, August 28.

The Roommate Game: A fun interactive old-style gameshow in which selected roommate pairs compete for prizes in front of a live studio audience.

Convocation: The Challenge: First-year Roanoke students will commit to living a life of integrity that adheres with the core values of the College. Students will meet at Clay and High Streets, listen to a brief message from Aaron Fetrow and take a pledge to a way of life that embodies Roanoke's four pillars - academic excellence, commitment to community, service to others and a life of personal distinction. They will then walk in a procession toward Roanoke's administration building, where they each will receive a special challenge coin, embossed with the College seal, from President Maxey and other administrators.

PAQ the MAQ: Freshman can show off their new Maroon pride by attending a Roanoke men's soccer game against Greensboro College. There will be a tailgate and dessert truck.