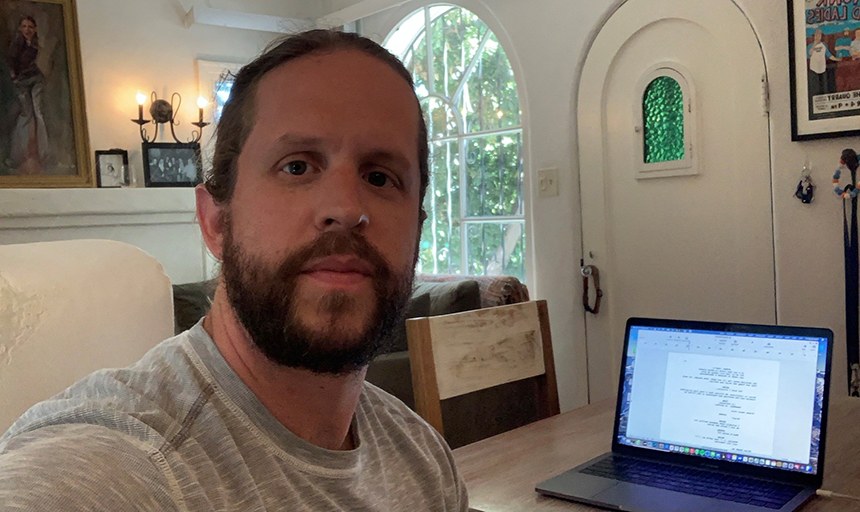 Phillip Murphy grabbed this selfie while at his home computer.

If you’ve seen the action-comedy movie “The Hitman’s Wife’s Bodyguard,” you may have noticed, in the closing credits, the name Phillip Murphy ’05 as one of the screenwriters.

Interesting fact: Murphy is a 2005 graduate of Roanoke College who co-wrote the film with his brother, writer/director Brandon Murphy, and with writer/producer Tom O’Connor. The film was released on June 16, 2021, and has grossed over $66 million worldwide.

The movie, which features Antonio Banderas, Morgan Freeman, Salma Hayek, Samuel L. Jackson and Ryan Reynolds, is a sequel to 2017’s “The Hitman’s Bodyguard.” The action-packed film follows Michael Bryce (Reynolds) as he teams up with hitman Darius Kincaid (Jackson) and his wife, Sonia, (Hayek) to stop a terrorist (Banderas) from attacking Europe.

“To see my name on the screen is pretty awesome, for lack of a better word,” Murphy said. “To be working for 10 years in the industry with a few scripts so close to production and then to have this one work out, it’s very exciting.”

While Murphy can now add ‘summer blockbuster screenwriter’ to his resume, his journey to this moment has been based on what he calls “trial and error.” Upon graduating from Roanoke College as a history major, Murphy moved to New York City to explore his options as an artist, dabbling in improvisation, acting and eventually, stand-up comedy. It was through his experience in stand-up comedy that Murphy recognized his love for writing.

“My best advice to young people interested in this profession is to try everything,” Murphy said.  “I credit a lot of where I am now to trying things that I didn’t necessarily know a lot about.”

Murphy followed his instincts, moved to Los Angeles, and started developing scripts in 2007, many of which he wrote with his brother, Brandon. By 2011, Murphy and his brother were pitching scripts to Hollywood executives in hopes of finding their big break.

“The transition to Los Angeles was easy because of my time at Roanoke. Because of the tight-knit community and relationships I built during my time there, I have been able hold on to staying true to myself and grounded. ”

With persistence and maintaining contacts in the industry, Murphy was personally approached in 2018 by “The Hitman’s Wife’s Bodyguard” director Patrick Hughes to develop the script for production. Hughes gave Murphy and his team the green light to push the envelope and make the film their own.

“Writing this script was just so fun,” said Murphy. “For me, the more irreverent the script the better.”

Now with one major motion picture under his belt, Murphy will continue to develop scripts to sell for production. Murphy and his brother have written a script called “The Last Drop,” which follows a chef coming to terms with his demons, as well as a script based on the 2006 book “Exile on Main Street: A Season in Hell with the Rolling Stones,” by Robert Greenfield, telling the story of the Rolling Stones’ difficulties recording their 1972 album. Both scripts are in negotiations.

Although Murphy has found Hollywood success, he credits his accomplishments to the foundation Roanoke College created for him.

“The transition to Los Angeles was easy because of my time at Roanoke,” said Murphy. “Because of the tight-knit community and relationships I built during my time there, I have been able hold on to staying true to myself and grounded.  Being around people who are so down-to- earth and humble is something I will always carry with me.”

Joe Boucher ‘87, Roanoke College’s director of student activities and Colket Center and mentor to many Roanoke College screen studies concentration students, said that Murphy is an inspiration to the growing number of Roanoke students pursuing their media arts dreams.

“When alumni like [Murphy] succeed, it shows our students what's possible,” Boucher said. “More importantly, with each success, we build our alumni entertainment network. Being able to connect with alumni in your field can help you get a foot in the door after graduation, especially in an industry like entertainment where networking with your peers is imperative.”

For students who are interested in the entertainment industry and want to explore their artistic expression, Murphy acknowledges that the path may be difficult but ultimately it is worth it.