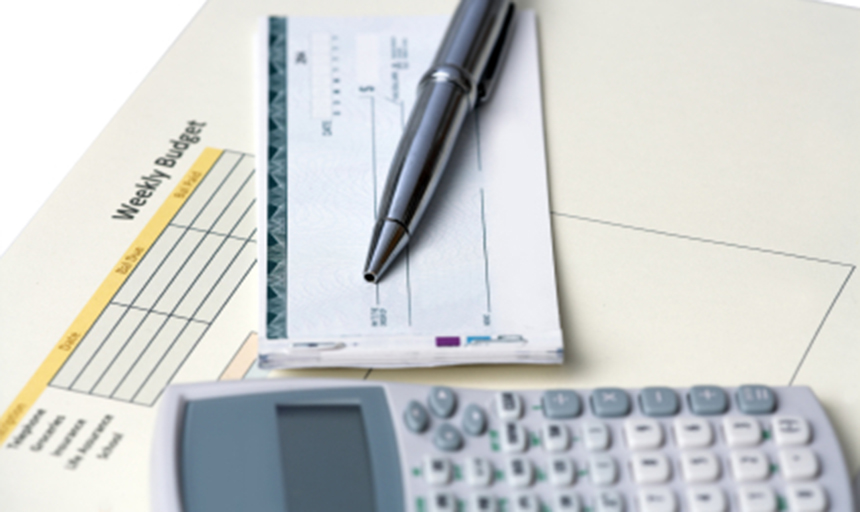 The Virginia Index of Consumer Sentiment fell by over four points to its lowest level since August 2018, hitting 94.4.  It remains more than 2.5 points above the 5-year average. The reduction is largely due to the adjusted consumer expectations for the coming year. Consumers plan to purchase expensive durable items before anticipated price increases from added tariffs. The party gap continued to grow after reaching the highest value since the 2016 Presidential election in August 2018. 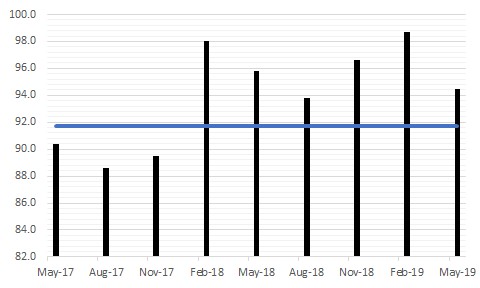 The Virginia Index of Consumer Sentiment (VAICS) deviated from the upward trend since the end of 2018, falling 4.3 points points since February. The national value is 100.0, up over six points since February. The early 2019 national slump was attributed to the government shutdown, and the February rebound partially attributed to the reopening of the Federal government. In May, national respondents cited increased confidence in government inflation and unemployment policies. Figure 2 shows the current index values for Virginia and the US: current, expectations, and overall sentiment, respectively (left to right.) Both remain in strong positions, in keeping with the positive labor market news and despite political volatility and uncertainty about international policy.

Figure 2. May 2019 Virginia and US Indexes of Current Conditions, Consumer Expectations, and Consumer Sentiment (left to right) 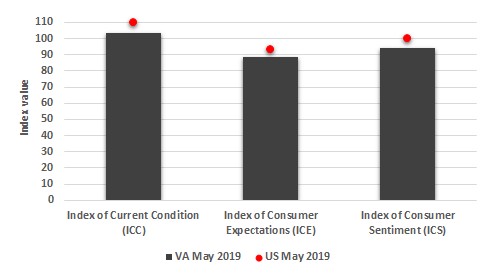 Figure 3 shows the five-year historical values for the VAICS and its two sub-indexes, the Index of Current Conditions (VAICC) and the Index of Consumer Expectations (VAICE). All values fell since last quarter, the VAICE particularly so. The reduction stems primarily from a moderation in optimism about the overall economy. Over 38% anticipate the next five years to be a period of strong economic growth and prosperity, a five-point reduction since February, although 41% believe their household finances will improve over the next year, which is statistically unchanged from last quarter. Over 58% believe that now is a good time to buy large durable items due to both rising income and concerns that prices will rise with tariffs. 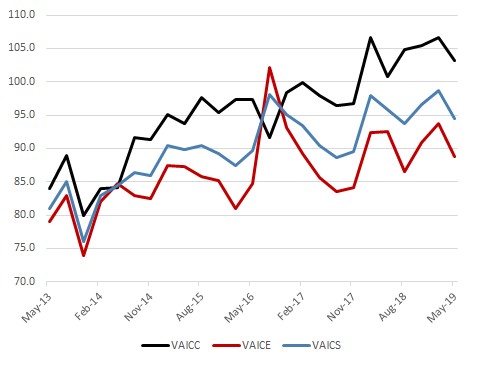 Figure 4 shows the Virginia Index of Consumer Sentiment by party affiliation. Prior to the 2016 Presidential election, Democrats were considerably more optimistic about the economy than their right-leaning peers. The party gap closed heading into the election, and flipped afterward, hitting a high in the third quarter of 2018 of almost 49 points. After the November 2018 election, Democrat sentiment jumped eight points while Republican’s fell by five points, closing the gap significantly.

May was a considerably less tumultuous month than February for Virginia politics, although sentiment continued to slide for the two major party affiliations: Democrat and Republican. Those who affiliate with the Democratic party reduced their sentiment by almost four points compared to the three-point reduction for Republicans. The party-gap grew by one point to 37.8. 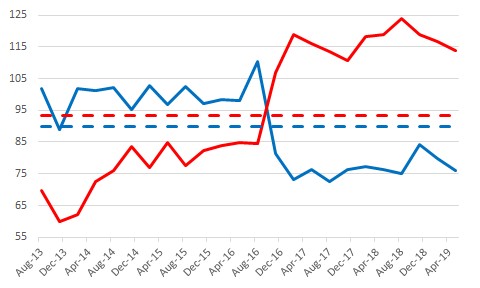 Short-term inflation expectations jumped dramatically from last quarter, coming in at 3.3 percent, a growth of one percentage point since February. Long-term expectations also tipped up to its August 2018 level of 3.9% as shown in Figure 5. President Donald Trump’s tariff conversations are likely driving the expectations. The measures indicate direction of overall price growth anticipated by Virginians over the next year and next 5-10 years, respectively. The short-term price expectation is well above the historical average, but the long-term rate is close to typical suggesting an abbreviated international policy effect. Price stability is important for investment and retirement planning. 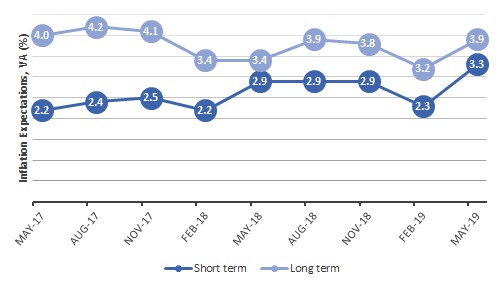 Interviewing for The Roanoke College Poll was conducted by The Institute for Policy and Opinion Research at Roanoke College in Salem, Va. between May 13 and May 22, 2019. A total of 608 Virginia residents 18 or older were interviewed. Telephone interviews were conducted in English. The random digit dial sample was obtained from Marketing Systems Group and included both Virginia landline and cell phone exchanges so that all cell phone and residential landline telephone numbers, including unlisted numbers from Virginia exchanges, had a known chance of inclusion. Cell phones constituted close to 30 percent of the completed interviews.

Questions answered by the entire sample of 608 consumers are subject to a sampling error of plus or minus approximately 4 points at the 95 percent level of confidence. This means that in 95 out of 100 samples, like the one used here, the results obtained should be no more than 4 points above or below the figure that would be obtained by interviewing all consumers who have a telephone. Where the results of subgroups are reported, the sampling error is higher. Sampling weights were constructed using Virginia Census 2010 data by age, race and gender groups. Quotas were used to ensure that different regions of the Commonwealth were proportionately represented. The margin of error was not adjusted for design effects due to weighting.