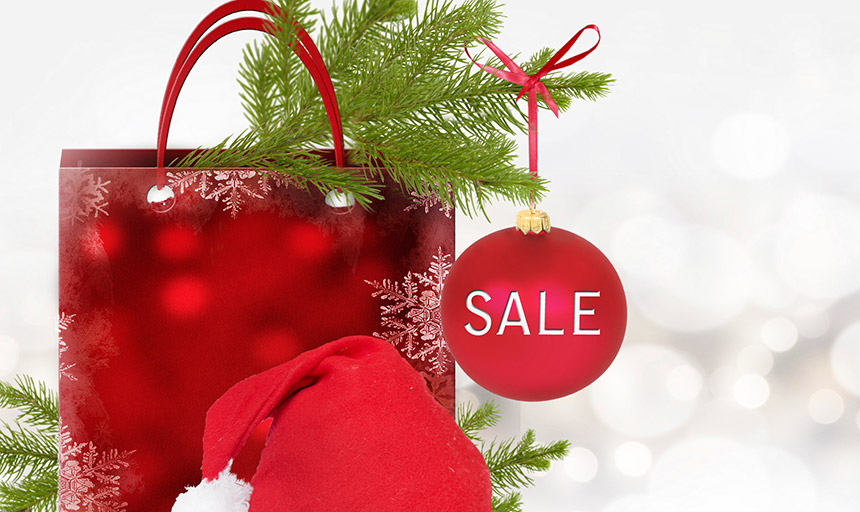 The Virginia Index of Consumer Sentiment is up one point to 89.5 in November, reversing a year-long slide and is three and a half points above its historical average. The political divide in sentiment contracted after the November election, but remains much wider than a year ago. Most respondents plan to spend at least as much during the holiday shopping season as last year and will use cash in those transactions. Inflation expectations dropped slightly from last quarter. 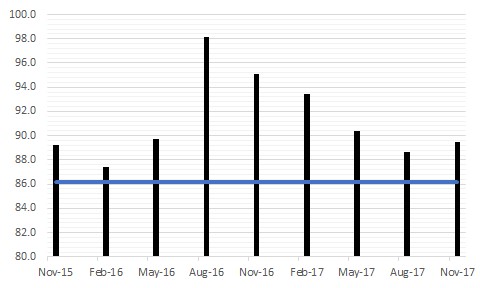 The Virginia Index of Consumer Sentiment (VAICS) reverses a year-long slide, increasing one point to 89.5. Prior to this quarter, the index fell almost ten points since last summer, although it remained above the historical average. The national value is 98.5 which also climbed a point since last quarter. Figure 2 shows the current index values for Virginia and the US. Figure 3 shows the historical values for the VAICS and its two sub-indexes, the Index of Current Conditions (VAICC) and the Index of Consumer Expectations (VAICE). Overall sentiment continues to be driven by beliefs about current economic conditions rather than expectations about the future. Consumers note rising incomes and low prices as sources of positivity in the Commonwealth. Over half of respondents report that now is a good time to buy large, durable items and 38% say their household finances are improved from last year. Although consumer expectations are low relative to current conditions, the VAICE remains well above its average with 42% reporting that they believe their household finances will improve over the coming year. Individual sentiment is influenced by political affiliation. Figure 4 illustrates sentiment in the Commonwealth for Democrats and Republicans and the five-year index averages for each. Sentiment among Democrats is historically well above that of Republicans in the Commonwealth until the 2016 election. Heading into that election, the gap between the parties grew to 26 points in favor of Democrats. By November, the gap switched by over 50 points in favor of Republicans. The gap increased substantially over the winter and spring of 2017, but closed slightly after the November 2017 election. Currently, 67% of Republicans expect the next five to ten years to be periods of economic growth and prosperity compared to 24% of democrats. The latter increased by 7 points since last quarter, further supporting the connection between election outcomes and consumer beliefs. 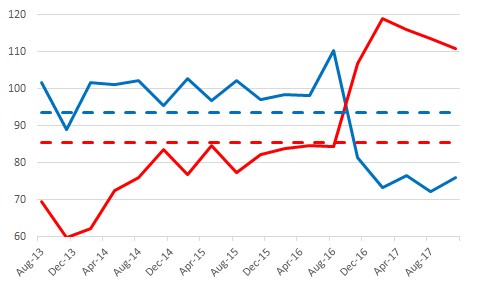 Many businesses rely on transactions in the holiday season to meet annual sale benchmarks. Sentiment concerning current conditions and expectations about improved household finances suggest a strong holiday season for retailers and other industries in the final quarter of 2017. Additionally, 53.7% report that now is a good time to buy large durable goods, largely due to the deals currently available in stores. Fifty-eight percent say that they will spend at least as much as last year this holiday shopping season. To finance these purchases, 67% say that they saved money and will pay in cash.

Both short-term inflation expectations increased by one-tenth of a point in the Commonwealth, while long-term expectations fell on one-tenth of a point, as shown in Figure 5. The measures indicate direction of overall price growth anticipated by Virginians over the next year and next 5-10 years, respectively. These expectations are close their historical averages, suggesting respondents are not concerned with abnormal price growth. Price stability is important for investment and retirement planning. 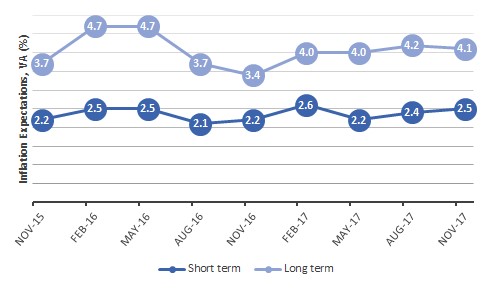 Interviewing for The Roanoke College Poll was conducted by The Institute for Policy and Opinion Research at Roanoke College in Salem, Va. between November 12 and November 20, 2017. A total of 605 Virginia residents 18 or older were interviewed. Telephone interviews were conducted in English. The random digit dial sample was obtained from Marketing Systems Group and included both Virginia landline and cell phone exchanges so that all cell phone and residential landline telephone numbers, including unlisted numbers from Virginia exchanges, had a known chance of inclusion. Cell phones constituted 25 percent of the completed interviews.

Questions answered by the entire sample of 605 consumers are subject to a sampling error of plus or minus approximately 4 points at the 95 percent level of confidence. This means that in 95 out of 100 samples, like the one used here, the results obtained should be no more than 4 points above or below the figure that would be obtained by interviewing all consumers who have a telephone. Where the results of subgroups are reported, the sampling error is higher. Sampling weights were constructed using Virginia Census 2010 data by age, race and gender groups. Quotas were used to ensure that different regions of the Commonwealth were proportionately represented. The margin of error was not adjusted for design effects due to weighting.