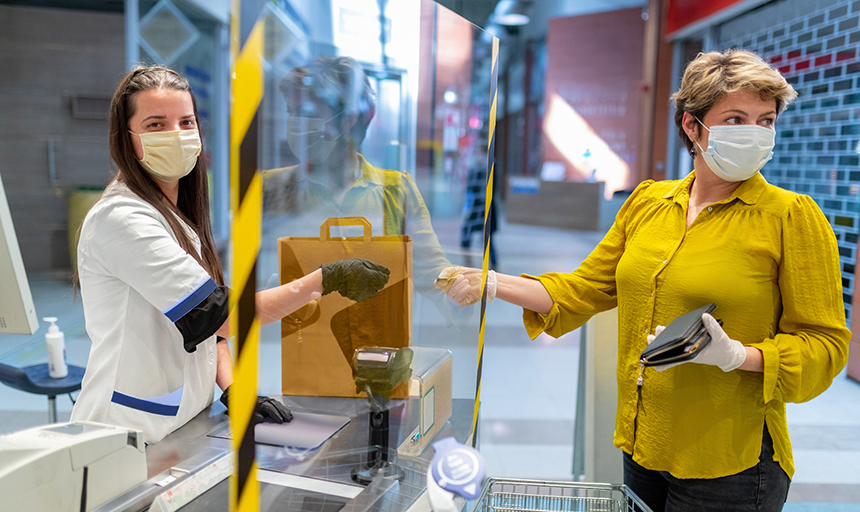 The Virginia Index of Consumer Sentiment plunged 7.7 points over the third quarter of 2021, coming in at 75.0, tying its second lowest value on record. The drop is the third-largest ever. The increased pessimism pervades the present and the future, with COVID-19 associated concerns overwhelming any positive news. Price expectations remain high, although withdrew moderately since May.

Consumer sentiment fell 7.7 points in the third quarter, the third-largest drop in the index on record. The only superior losses occurred after the contentious 2013 gubernatorial election (November 2013, 9.0 point drop) and early in the COVID pandemic (May 2020, 15.7 point drop). Nationally, the July unemployment rate was 5.4%; the rate in Virginia was 4.2%, down from 7.9% one year ago. Concerns about rising prices and reduced purchasing power drown out the good news about the rapidly recovering labor market.

Respondents from the Commonwealth are much more concerned about the current economy as measured by the Index of Current Conditions (ICC). In August, the VA ICC is 72.5, almost 5.5 points below the preliminary national number and down five points since the last quarter in Virginia. Close to 32 percent of respondents say that their household finances are better now than a year ago, while 30 percent say they are worse off. Despite the scaled-back public health measures, 50 percent believe that business conditions are worse today than one year ago.

Although the sentiments are not robust, there is more optimism about the future relative to the current conditions. The Virginia Index of Consumer Expectations (ICE) is 76.6, more than 10 points above the preliminary national number. About 48 percent of respondents believe that the coming few years will be the same or better than the past year, leaving over half who think things will deteriorate. In August, the relative optimism about the future waned in the Commonwealth, with the ICE dropping by nine points.

Virginians anticipate an increase in overall prices in 2021 and beyond, although those expectations have moderated since last quarter. Individual beliefs about prices are heavily influenced by what one sees regularly (ex. fuel and food prices). As the economy reopens, the demand surge for goods and services is outpacing supply, adding pressure to overall prices. Much of the market differential will likely close by the end of the year, assuming no additional supply constraints from COVID or some virus variant.

“Consumer sentiment in the Commonwealth dropped significantly since last quarter,” says Dr. Alice Louise Kassens, John S. Shannon Professor of Economics and Senior Analyst at the Roanoke College Institute for Policy and Opinion Research. “The economy continues to strengthen, with the state unemployment rate dropping to 4.2% in July. Unfortunately, concerns about rising prices and the virus are driving overall sentiment. The COVID-19 delta variant is creating new uncertainty. The coming weeks will be crucial for a sustained recovery. With little interruption, markets should continue to work out supply chain issues, and prices should return to more normal levels.”

Interviewing for The Virginia Consumer Sentiment and Inflation Expectations Report was conducted by The Institute for Policy and Opinion Research at Roanoke College in Salem, Va. between Aug. 3 and Aug. 17, 2021. A total of 618 Virginians were interviewed. Telephone interviews were conducted in English.

The landline sample consisted of random-digit numbers generated in proportion to the Virginia population so that all residential telephone numbers, including unlisted numbers, had a known chance of inclusion. Cellphone samples were purchased from Marketing Systems Group and Call Delivery Systems. Cellphones comprised 49 percent of the completed interviews.

Questions answered by the entire sample of 618 respondents are subject to a sampling error of plus or minus approximately 4.0 percent at the 95 percent level of confidence. This means that in 95 out of 100 samples like the one used here, the results obtained should be no more than 4.0 percentage points above or below the figure that would be obtained by interviewing all Virginians who have a home telephone or a cellphone. Where the results of subgroups are reported, the sampling error is higher.

Quotas were used to ensure that different regions of the Commonwealth were proportionately represented. The data were statistically weighted for gender, race and age. Weighting was done to match Virginia census data. The margin of error was not adjusted for design effects due to weighting.