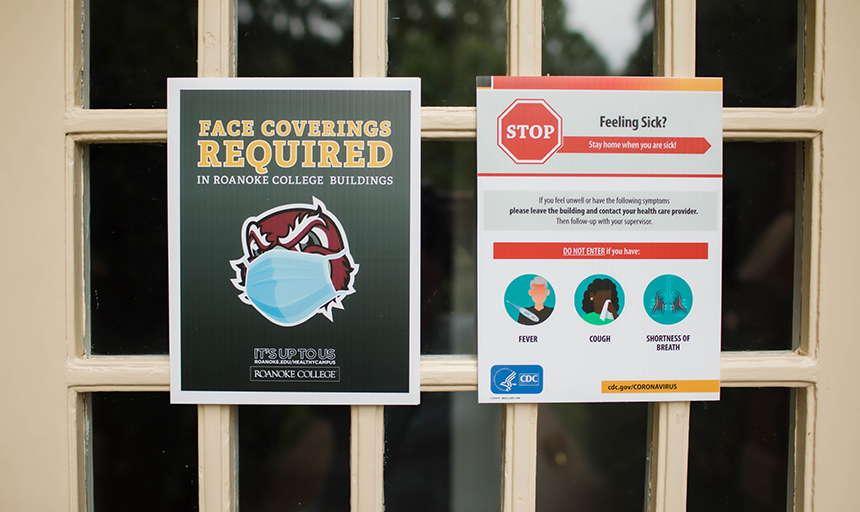 The Virginia Index of Consumer Sentiment fell almost two points over the last quarter, remaining 10 points below pre-COVID-19 levels. The November 2020 value is 86.9, five and a half points below the five-year average. The influence of politics is a wash, with Democrats and Republicans swapping tremendous, but offsetting, changes in sentiment. The universal drain on Virginian sentiment is COVID-related uncertainty. 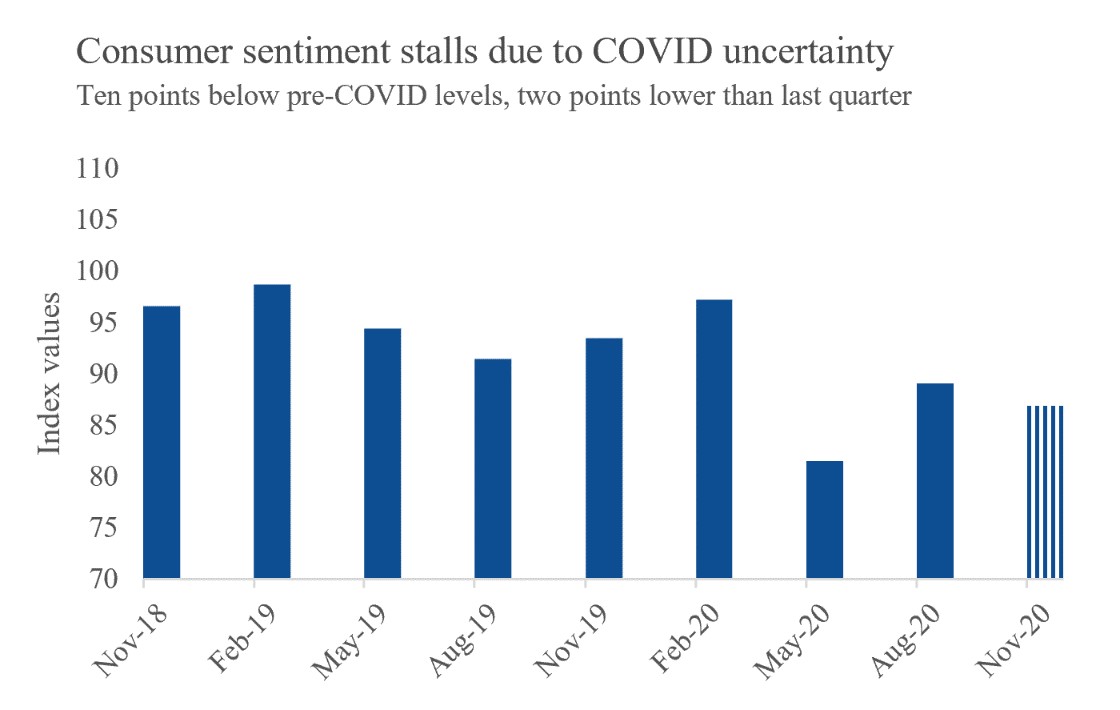 Figure 1 illustrates the modest retreat in consumer sentiment since August. Sentiment pulled back half of the COVID losses in the third quarter of 2020, but despite a steadily improving economy, increased positive cases and hospitalizations gave back some of those gains in the fourth quarter. To mitigate the spread of the virus, Gov. Ralph Northam implemented new restrictions earlier this month, including limiting gatherings to 25 or fewer and requiring restaurants to stop serving alcohol by 10 p.m.

Figure 2 shows the year-on-year change in the number of seated diners by month in the Commonwealth. After the severe restrictions were lifted in May, Virginians slowly returned to restaurants, but in numbers well off those seen in 2019. With the colder weather, increased positive virus cases and new restrictions, the number of diners began to decline in November, averaging 46% below the number of customers in November 2019. 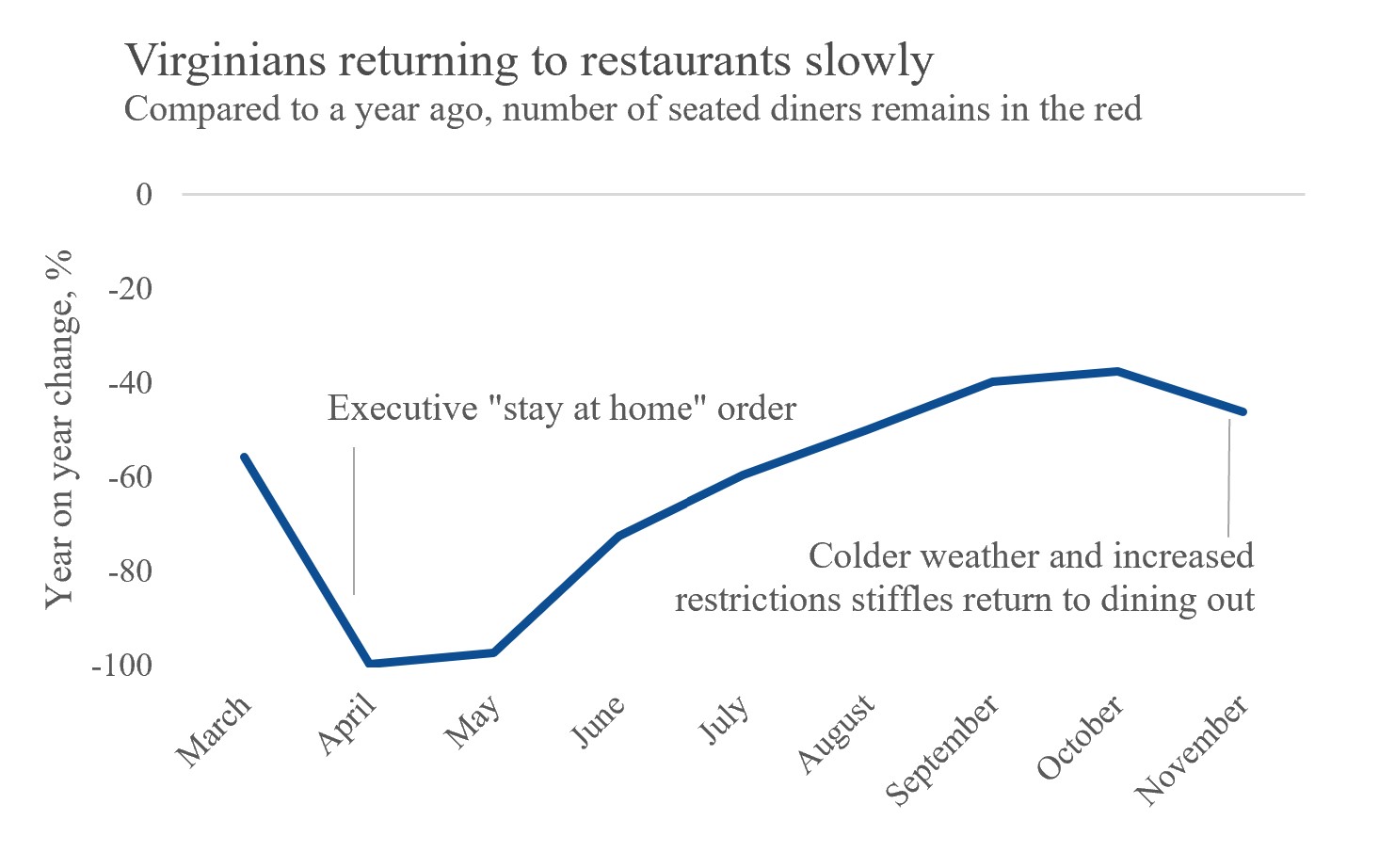 Economic activity continues to resume across many industries, leading employers to hire workers in leisure and hospitality, professional and business services, retail trade and construction, driving the national unemployment down to 6.9% in October. The unemployment rate in Virginia is 6.0%. Nearly 80% of Virginians believe that business conditions are worse today than a year ago, but over half believe things will improve over the next year. 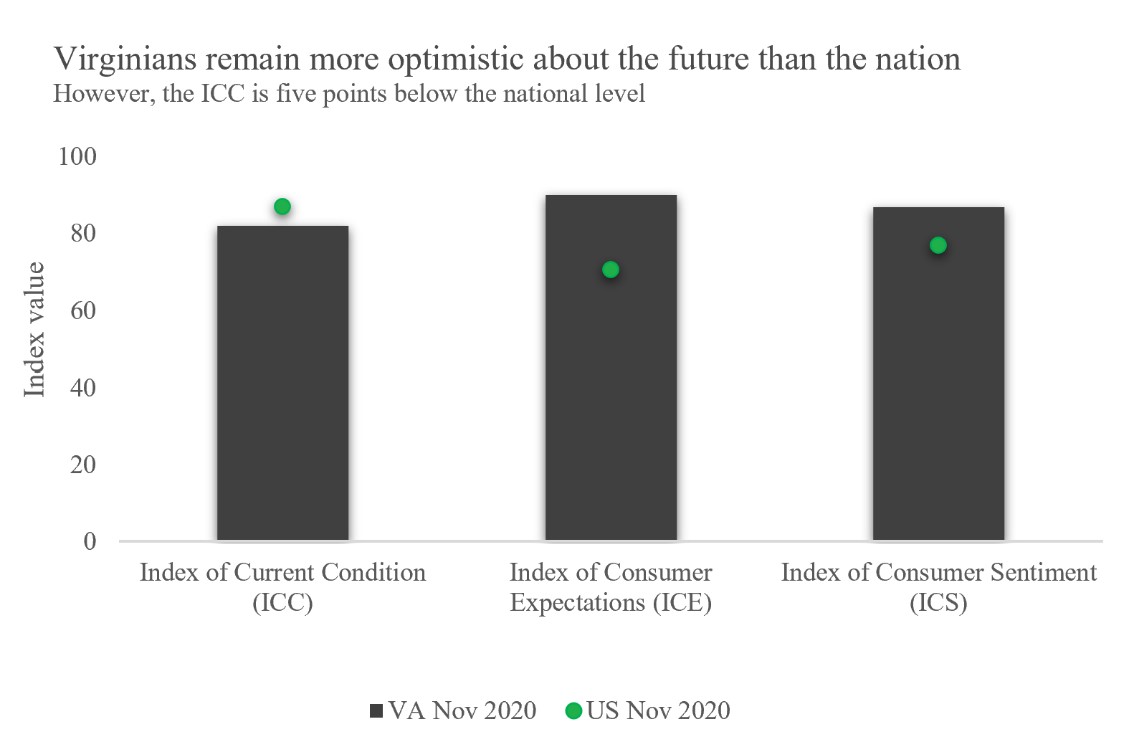 Virginians’ view of the economy differs from the nation, as illustrated in Figure 3. Respondents from the Commonwealth are much more concerned about the current economy, as measured by the ICC. Only 30% of respondents report improved finances from a year ago. Despite the relatively low value, Virginians’ sentiment about the current economy increased for the second consecutive quarter.

Virginians are relatively more optimistic than the nation with respect to expectations about the economy. Forty-three percent believe that the next three to five years will be a period of economic growth and prosperity compared to 39% who expect a period of high unemployment and stagnation. Figure 4 shows the three consumer sentiment measures over time. The ICS is an aggregate of the ICC and ICE. Although the ICC increased since the last quarter, the ICE declined by more, driving down the ICS. 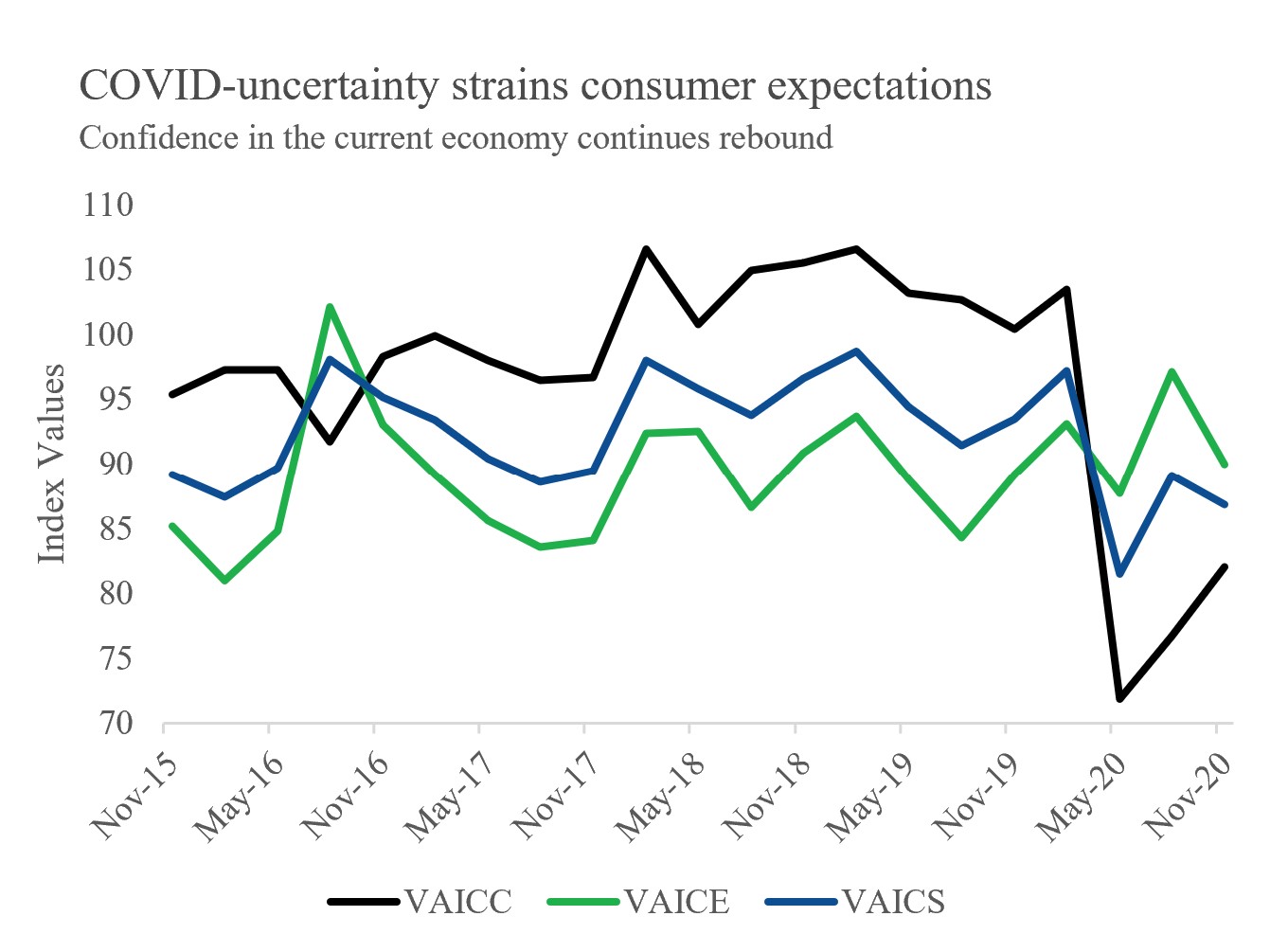 Figure 5 shows the short- and long-term price expectations in the Commonwealth. The long-term growth in price expectations is 4.0%, exactly the historic mean value, while the one-year expected growth rate is 3.4%. Respondents are sensitive to the prices they see around them daily. Food prices increased by close to 4% in the past 12 months. Nationally, consumer prices were unchanged in October 2020 and increased 1.2% percent year-over-year (unadjusted). 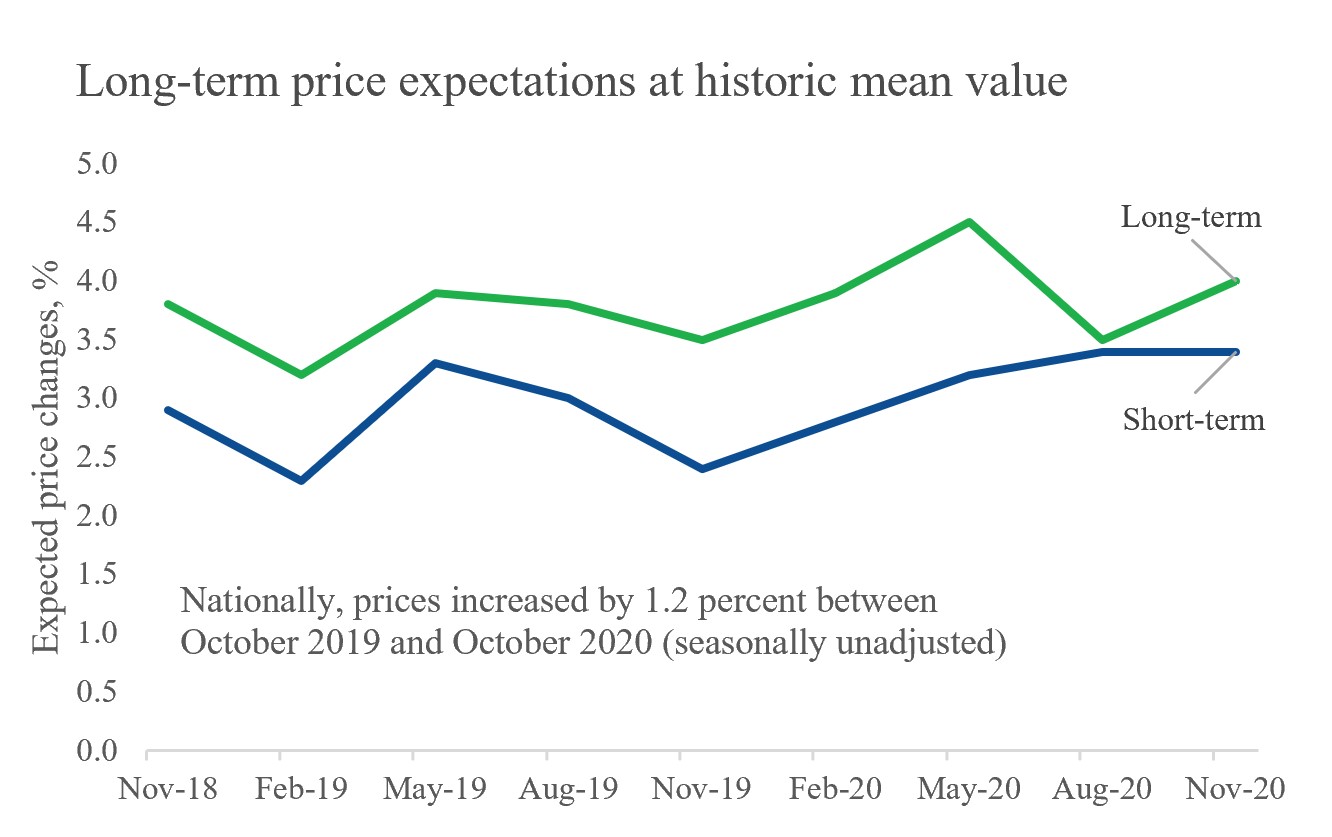 “Consumer sentiment in the Commonwealth retreated from the gains in the third quarter due to concerns about the virus and the related economic uncertainty,” Dr. Alice Kassens, senior analyst for the Roanoke College Institute for Policy and Opinion Research, said. “Economic activity continues to increase as seen in the drastically falling unemployment rate, possibly due to the strong economic fundamentals in place prior to the COVID-driven recession. The recent increase in positive cases, hospitalizations and resulting government restrictions has Virginians on edge and concerned about the future. These worries are reflected in the retreating consumer sentiment value.”

Interviewing for The Virginia Consumer Sentiment and Inflation Expectations Report was conducted by The Institute for Policy and Opinion Research at Roanoke College in Salem, Virginia, between Nov. 8 and Nov. 19, 2020. A total of 605 Virginians were interviewed. Telephone interviews were conducted in English.

The landline sample consisted of random-digit numbers generated in proportion to the Virginia population so that all residential telephone numbers, including unlisted numbers, had a known chance of inclusion. Cellphone samples were purchased from Marketing Systems Group and Call Delivery Systems. Cellphones comprised 56% percent of the completed interviews.

Questions answered by the entire sample of 605 respondents are subject to a sampling error of plus or minus approximately 4.0 percent at the 95 percent level of confidence. This means that in 95 out of 100 samples like the one used here, the results obtained should be no more than 4.0 percentage points above or below the figure that would be obtained by interviewing all Virginians who have a home telephone or a cellphone. Where the results of subgroups are reported, the sampling error is higher.

A copy of the questions and all toplines may be found at this link.