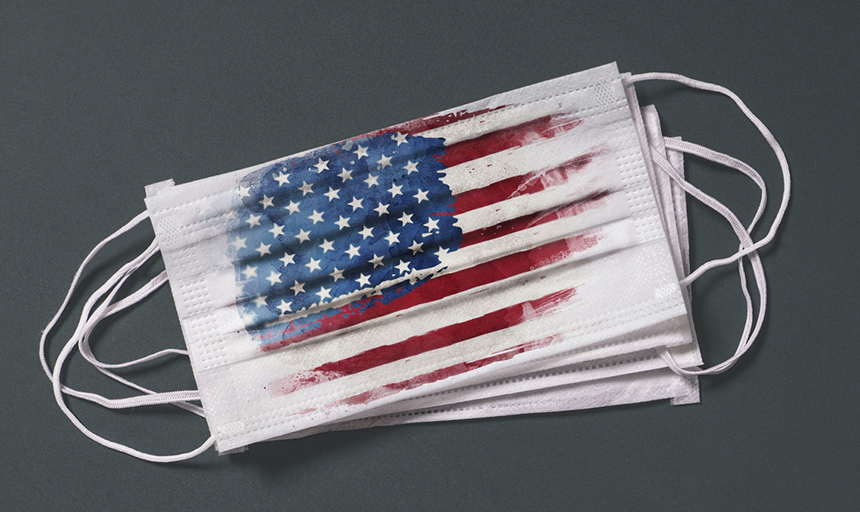 To measure how Virginia feels about vaccination and mask-wearing, along with exploring political anxiety, The Institute for Policy and Opinion Research interviewed 634 adult residents of Virginia between Nov. 7 and Nov. 15 in a survey addressing these topics. The survey has a margin of error of +4.4%.

The percentage of adult Virginians who are fully vaccinated against COVID-19 or are awaiting their second dose remains near 78%, while just 2% say they plan to start vaccination soon, according to the latest Roanoke College Poll. These numbers remain unchanged from similar results in September (82% fully or partially vaccinated and 3% plan to start soon) when both polls’ margins of error are considered. The percentage of adults who state they do not plan to get vaccinated (13% now, 11% in September) also remains essentially constant.

Among those adults fully vaccinated, 24% have received a third dose or booster shot, another 51% plan to get another shot when they’re able, and 22% do not plan to receive another dose.

Both vaccination results differ greatly when political party is considered. Democrats report full or partial vaccination at 90% with just 3% not planning to get a shot; for Republicans, those numbers are 67% and 24%. Regarding booster shots, 81% of Democrats have or plan to get an additional dose of vaccine with only 18% not planning to do so. Republicans have a lower rate of booster dose interest (67%) and increased rate of reporting no plans to receive an additional shot (37%.)

Roanoke College Poll also asked Virginians about their likelihood of wearing a mask in various scenarios. Roughly 72% of Virginians are very or somewhat likely to wear a mask in many indoor scenarios (grocery stores, indoor retail stores, working near others, and attending an indoor art, entertainment or music venue.) Outdoor retail establishments or art/entertainment venues result in about 51% of residents likely to wear a mask. Restaurants and bars see lower amounts of mask wearing, whether they are indoor (57% likely) or outdoor (39% likely).

That political party divide on mask wearing exists across all scenarios presented to the respondents, such as grocery stores (90% Democrats likely compared to 52% of Republicans), at work (88% compared to 54%), dining inside (76% compared to 35%), and hair salons/barbershops (79% compared to 43%.)

Since the middle of 2016, IPOR has tracked political anxiety in the Commonwealth and last reported on results in March. In this November poll, more than three-fourths (79%) of Virginians report trusting the federal government to do what is right only some of the time or never. A larger majority than in March (60%) thinks that ordinary citizens can do a lot to influence the federal government, and more than half (58%) thinks their side is losing more than winning in politics today, while 29% think they are winning more than losing.

Just shy of half (49%) believe that the country’s best years are ahead of it, while nearly the same (45%) believe its best years have passed; this is the lowest level for “best years are ahead” since IPOR began asking this question. Two-thirds (66%) of respondents say that things in the country are on the wrong track, up 8 percentage points since September. Overall, a large majority of Virginians (84%) continues to see the nation divided regarding the important issues facing the country.

A plurality of respondents (47%) is dissatisfied with how the federal government is (or isn’t) working. Another 20% are angry, but 26% are satisfied and 3% are enthusiastic. In the aggregate, each of these measures has remained relatively stable over time, but the responses of subgroups have varied, particularly those of Democrats and Republicans, depending upon which party is in power. See the crosstabs at the end of the topline, linked at the end of this release for more. 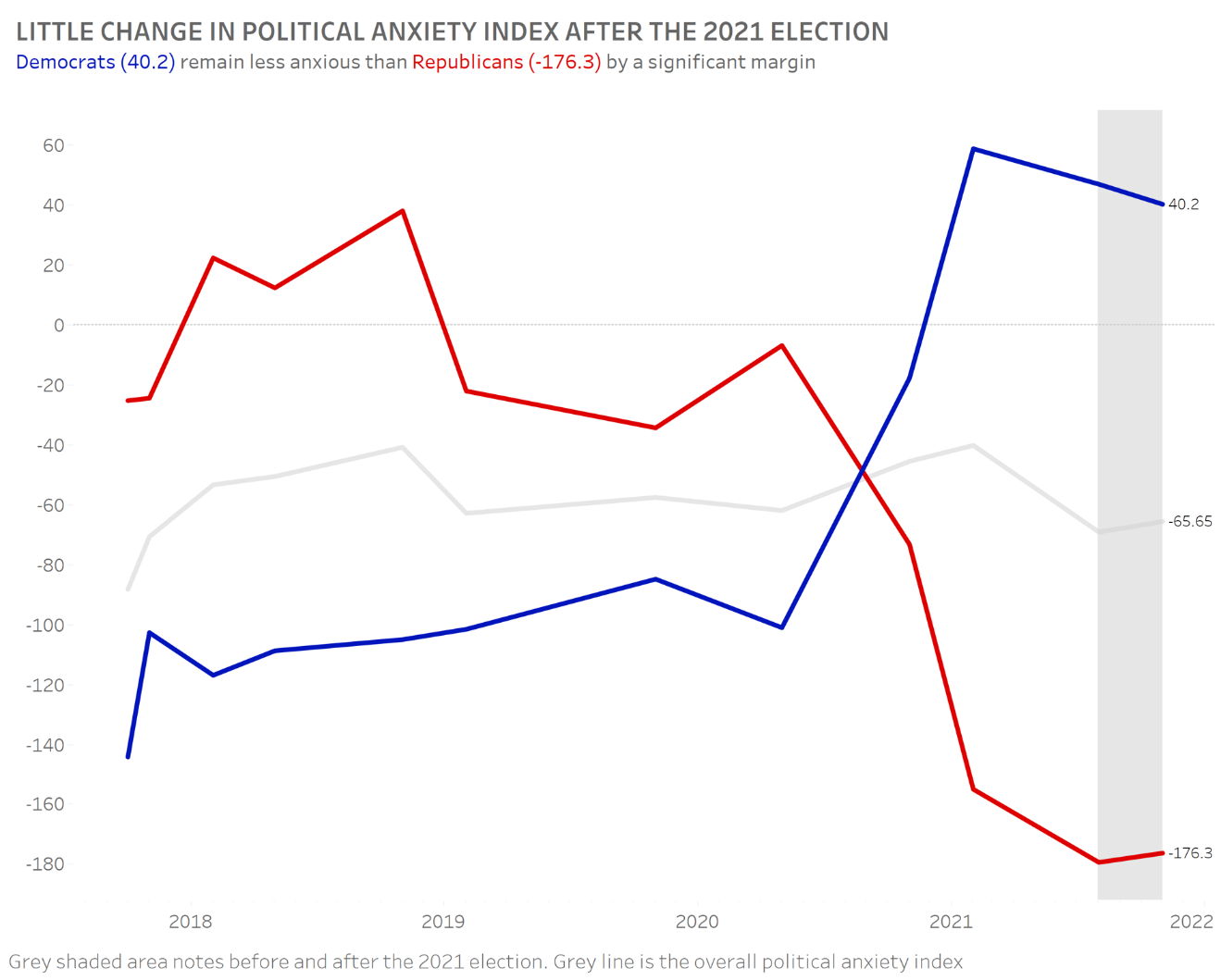 Six of these questions regarding political anxiety are used to construct our Political Anxiety Index and data since late 2017 appears in the graph above. Higher numerical values represent less anxiety, with an index maximum value of 300 and minimum possible value of -300.

While political anxiety overall (gray line) has not changed much over the last four years, a large gap between Democrats and Republicans exists. Unlike the huge flip in anxiety by party in November 2020, the results of the gubernatorial election in November 2021 did not result in a large change in anxiety for either party; Democrat index value moved from 46.9 to 40.2 which the Republican index value increased from -179.4 to -176.3 (see gray region in the figure).

“Vaccination and mask wearing continue to be partisan issues for many and the wide gap in political anxiety between democrats and republicans remains. Neither result is much of a surprise,” says Dr. David Taylor, director of IPOR. “Regarding COVID-19, while an eighth of Virginians may never get vaccinated, some good news exists with at least three-quarters of fully vaccinated Virginians interested in or already receiving an additional dose. One worry heading into a larger holiday time is that two-thirds of Virginians are somewhat or very unlikely to wear a mask when visiting with friends and family and with the continued presence of new infections, including breakthrough cases, in Virginia, new case counts are likely to rise through the holiday season.”

“Political anxiety has been, and continues to be, tied closely to the party in the White House,” Taylor said. “We saw the largest flip and resulting gap in the Political Anxiety Index following the 2020 presidential election; given the polarization in the country between the election itself and inauguration, such a divide was not a surprise. The index itself is tailored towards anxiety regarding politics at the federal level so while we would not expect to see a huge shift as a result of Youngkin’s victory, the relatively small change in index reflects that Virginians see little connection between statewide politics and the federal government.”

“Virginians are saying that the country is going in the wrong direction, they have large levels of dissatisfaction and anger with Washington, DC, along with little trust in the federal government to do the right thing most of the time,” Taylor said. “It is worrisome to see the percentage of respondents believing that our best times are ahead of us drop below half but that 60% believe that ordinary citizens can still influence the federal government is perhaps one bit of promising news.”

Interviewing for The Roanoke College Poll was conducted by The Institute for Policy and Opinion Research at Roanoke College in Salem, Virginia between November 7 and November 15, 2021. A total of 634 residents of Virginia, 18 or older, were included in this study. Telephone interviews, conducted in English, comprised 387 of the respondents and 247 responses were drawn from a proprietary online panel of Virginians. The landline sample consisted of random-digit numbers generated in proportion to the Virginia population so that all residential telephone numbers, including unlisted numbers, had a known chance of inclusion. Cellphone samples were purchased from Marketing Systems Group and comprised 60% of the completed interviews. Lucid, LLC, facilitated the online panel.

Questions answered by the entire sample of 634 respondents are subject to an error margin of plus or minus approximately 4.4% at the 95% level of confidence. This means that in 95 out of 100 samples such as the one used here, the results obtained should be no more than 4.4 percentage points above or below the figure that would be obtained by interviewing all Virginia adults who have a home telephone or a cellphone. Where the results of subgroups are reported, the margin of error is higher.

Quotas were used to ensure that different regions of the Commonwealth were proportionately represented. The data were statistically weighted for gender, race, and age and done to match Virginia census data. The design effect was 1.271; the reported margin of error above reflects this design effect.