Youngkin Approval Up, Biden Approval Down, Virginia’s Thoughts on Russia/Ukraine, Abortion, and More

The Institute for Policy and Opinion Research (IPOR) at Roanoke College interviewed 648 adult residents of Virginia between May 15 and May 26 in a survey addressing topics such as the war in Ukraine, abortion, political anxiety and general feelings about current and former elected officials. The survey has a margin of error of 4.7%.

Nearly five months into his term as governor of Virginia, Glenn Youngkin’s approval rating has increased to 53% (from 50% in February) while disapproval, at 35%, is down from 41% in February. More Democrats (41%) approve of Youngkin’s performance now than they did three months ago (30%), while approval in Youngkin’s own party is down (84% approval in February versus 75% approval now). Approval of President Joe Biden’s job continues to decline according to the Roanoke College Poll, now at 37%, down from its previous low of 41% in February. That decline is seen across all Virginians regardless of political party affiliation.

For the most part, Democrats and Republicans in Virginia are united regarding their thoughts on the ongoing war in Ukraine. More than three-quarters (76%) of Virginias are following the news regarding Russia’s invasion of Ukraine either very or somewhat closely and nearly two-thirds (66%) feel that the worst of the war is yet to come. With regards to the effectiveness of sanctions on pressuring Russia to end the war, 40% of Virginias feel that sanctions will be very or somewhat effective; Democrats are more optimistic that sanctions will work (54%) compared to Republicans (30%). About half (47%) of respondents said that the United States should offer more support to Ukraine, but not at the risk of our country getting into a war with Russia. Fewer, at 33%, said that the U.S. is already doing enough to support Ukraine, while even fewer, 17%, said that we should offer more support even if it risks getting our country into a war with Russia. Of note, only 22% of Democrats felt that the U.S. was already providing enough support, while 40% of Republicans felt that way.

The Poll asked Virginians whether they felt Russian President Vladimir Putin is a war criminal or not. Most, 84%, agreed that he is, while 11% said he is not. Interestingly, Democrats (90%) and Republicans (86%) are virtually united on this issue, while Independents, at 77%, were less likely to use “war criminal” to describe Putin.

Since the middle of 2016, IPOR has tracked political anxiety in the Commonwealth and last reported on results in November 2021. In the Roanoke College Poll conducted in May 2022, 80% of Virginians report trusting the federal government to do what is right only some of the time or never, unchanged from November. A slight majority (52%) thinks that ordinary citizens can do a lot to influence the federal government, down from 60% in November. The Poll found that nearly two-thirds (65%) of respondents think their side is losing more than winning in politics today, an increase since November (58%) and the largest “losing more than winning” rating seen since political anxiety has been tracked. Disaggregated by party, 33% of Democrats feel they are on the winning side, while only 21% of Republicans feel that way.

A majority of respondents (52%) is also dissatisfied with how the federal government is (or isn’t) working. Another 21% are angry, but 21% are satisfied and 3% are enthusiastic. In the aggregate, each of these measures has remained relatively stable over time, but the responses of subgroups have varied, particularly those of Democrats and Republicans, depending upon which party is in power. See the crosstabs at the end of the topline, linked at the end of this release for more. 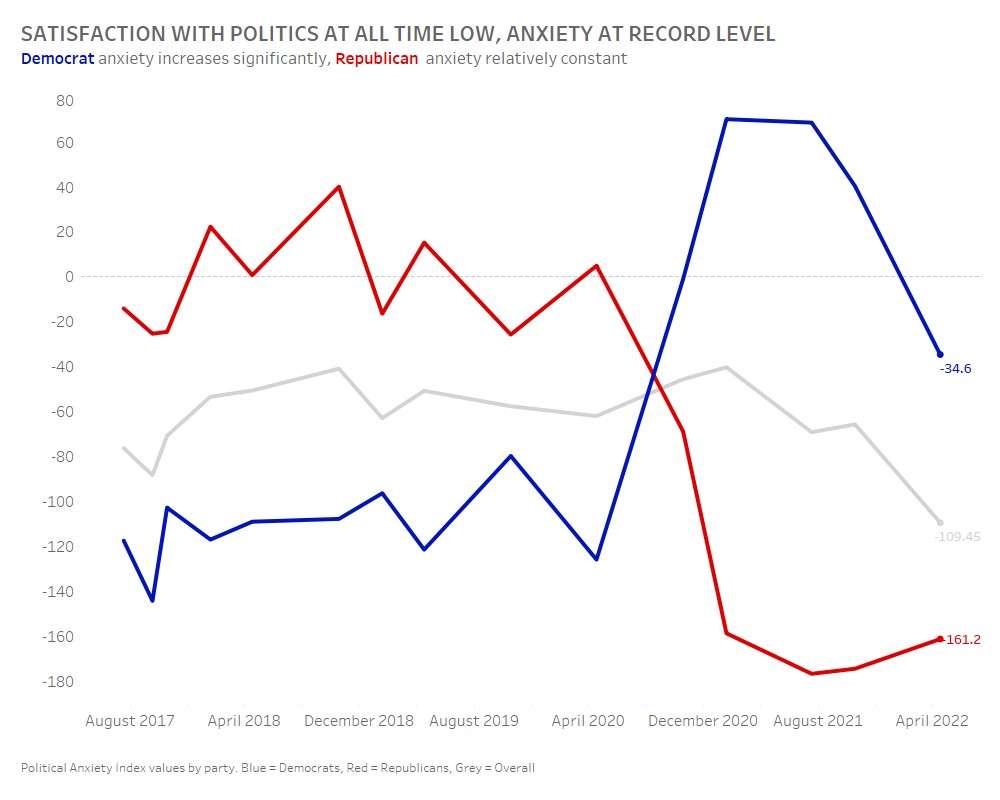 Six of these questions regarding political anxiety are used to construct our Political Anxiety Index and data since late 2017 and appears in the graph above. Higher numerical values represent less anxiety, with an index maximum value of 300 and minimum possible value of -300.

While political anxiety overall (gray line) had not changed much over the past four years, that is no longer true. Anxiety increased since November, moving from -65.7 to -109.5 in May. As usual, a large gap between Democrats (-34.6) and Republicans exists (-161.2) with Independents solidly in the middle (not shown as Independents roughly following the overall line). Values in November for Democrats and Republicans were 40.4 and -174.4, respectively, noting that anxiety has decreased slightly among Republicans but decreased immensely among Democrats.

“No surprise, but very few people are happy with government these days,” said Dr. David Taylor, director of IPOR. “Political anxiety has remained low for Republicans and increased for both Democrats and Independents as the federal government struggles to get meaningful things accomplished. Approval of President Biden is down and the percentage of Virginians that feel the country is on the wrong track is at an almost all-time high. Almost two-thirds of the residents of the Commonwealth feel that their ‘side’ is losing more often than it is winning, and almost three-quarters of us are dissatisfied or angry at the federal government.”

“Here in Virginia, though, just about five months into his term as governor, Glenn Youngkin’s approval ratings have improved, most notably among Democrats, and many more Virginians feel that the Commonwealth is going in the right direction compared to the country.”

“The war in Ukraine is one area where Democrats and Republicans in our state seem united. While Republicans tend to believe that sanctions against Russia will not be effective and feel that the United States is already doing enough to support Ukraine, respondents from both parties fear that the worst of the war is yet to come and brand Russian President Vladimir Putin as a war criminal.”

“More Virginians than not have a favorable opinion of the United States Supreme Court despite a majority disagreeing with the leaked early draft of an opinion that would potentially overturn part or all of Roe v. Wade, the landmark 1973 decision regarding abortion. Our poll asked when abortion should be legal — in all circumstances, under certain circumstances, or never — back in 2015 and again now. In those seven years, Virginians have become more progressive regarding abortion, with more residents believing it should both be legal in all situations and legal in certain situations (and, of course, fewer residents, at 11%, believing it should illegal altogether).”

Interviewing for The Roanoke College Poll was conducted by The Institute for Policy and Opinion Research at Roanoke College in Salem, Virginia between May 15 and May 26, 2022. A total of 648 residents of Virginia, 18 or older, were included in this study. Telephone interviews, conducted in English, comprised 403 of the respondents and 245 responses were drawn from a proprietary online panel of Virginians. The landline sample consisted of random-digit numbers generated in proportion to the Virginia population so that all residential telephone numbers, including unlisted numbers, had a known chance of inclusion. Cellphone samples were purchased from Marketing Systems Group and comprised 59% of the completed telephone interviews. Lucid, LLC, facilitated the online panel.

Questions answered by the entire sample of 648 respondents are subject to an error margin of plus or minus approximately 4.7% at the 95% level of confidence. This means that in 95 out of 100 samples such as the one used here, the results obtained should be no more than 4.7 percentage points above or below the figure that would be obtained by interviewing all Virginia adults who have a home telephone or a cellphone. Where the results of subgroups are reported, the margin of error is higher.

Quotas were used to ensure that different regions of the Commonwealth were proportionately represented. The data were statistically weighted for gender, race, and age and done to match Virginia census data. The design effect was 1.517; the reported margin of error above reflects this design effect.