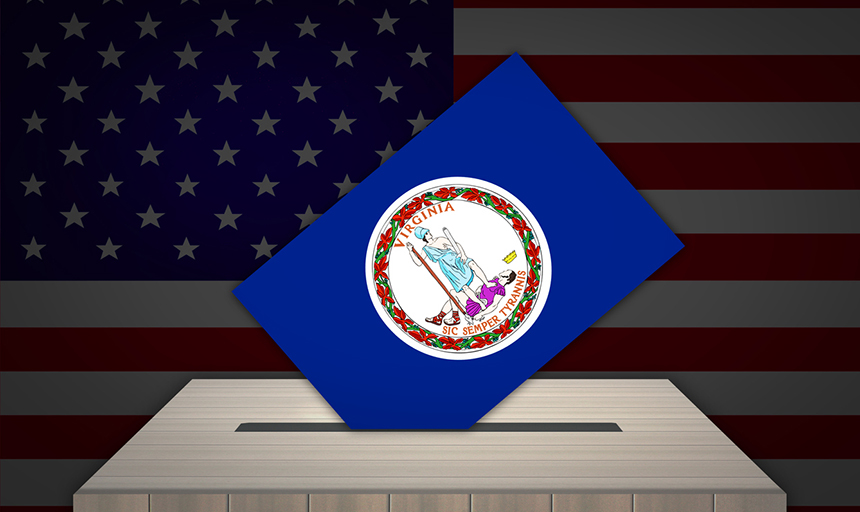 Former Democrat Governor Terry McAuliffe maintains a 7-percentage point lead over Republican Glenn Youngkin (48%-41%) with 9% undecided in the race for Virginia governor, according to The Roanoke College Poll. Democrats also lead the downticket races, with Del. Hala Ayala (D) ahead of former Del. Winsome Sears (R) 45%-40% for lieutenant governor and Attorney General Mark Herring (D) leading Del. Jason Miyares (R) 47%-37% in the race for attorney general. The Institute for Policy and Opinion Research interviewed 603 likely Virginia voters between September 12 and September 26 and has a margin of error of +4.0%.

Republicans hold an advantage in being extremely enthusiastic about voting (43% to 35% for Democrats), while about 9 in 10 partisans say they are almost certain to vote (91% of Republicans vs. 88% of Democrats). Likely voters see the economy (21%) and COVID (19%) as the most important issues in the election ahead of race relations (6%), and health care (6%).

McAuliffe’s favorable rating is 50% while his unfavorable is 37% with 13% unsure or not knowing enough to have an opinion. Youngkin is at 40%/41% favorable/unfavorable (both numbers up significantly in a month), while 20% of likely voters still don’t have an opinion about him.

Biden, Northam, the Nation, and the Commonwealth

Half of likely voters (50%) approve of the way President Joe Biden his handling his job and 45% disapprove. Biden’s approval rating has remained relatively stable, but disapproval has been rising in each Roanoke College Poll since he took office. Biden’s favorable/unfavorable rating is 51%/46%. Just over one-third (35%) of respondents think the country is headed in the right direction, while 58% think the country is on the wrong track.

While a majority of likely voters (59%) think the decision to withdraw troops from Afghanistan was correct, two-thirds (66%) think the United States failed in achieving its goals. Nearly three-fourths (73%) of respondents rate the job of the Biden administration in Afghanistan as fair or poor, and 90% view Taliban control of Afghanistan as a threat to the security of the U.S.

Job approval for Virginia Governor Ralph Northam sits at 55%, while 40% disapprove of his performance. Just over half (52%) of respondents think that Virginia is headed in the right direction, but 43% think the state is on the wrong track. Northam is viewed favorably by 54% of likely voters (a Roanoke College Poll record high for him) and is seen unfavorably by 39% (also a record high).

Regarding the Commonwealth’s budget surplus, voters prefer to see increased funding for education (42%), or tax cuts (29%), while fewer want to see more money allocated for social programs (20%) or salary increases for state employees (6%). Abortion policy has been emphasized in the campaign as well. A majority of likely voters (62%) thinks abortion should be legal in most or all cases, while about one-third (32%) think it should be illegal in most or all cases.

Nearly three-fourths (74%) of Virginia residents know someone who has contracted COVID. Among those who know someone, 79 respondents (18%) had the virus themselves. More than half (51%) have a family member who was sick, and 51% have a friend or relative who had the virus. Two-thirds (66%) of respondents are very or somewhat concerned that they or someone in their household will contract the virus.

“The common theme in U.S. elections in the past decade has been a ‘base election that will be decided on turnout.’ Virginia 2021 is no different,” said Harry Wilson, senior political analyst of the Roanoke College Poll. “McAuliffe has maintained his lead, but some of the underlying actors favor Youngkin and the Republicans. They hold an advantage in enthusiasm and, perhaps, a tiny advantage in likelihood to vote. Partisans on both sides are firmly entrenched in support of their candidate, Republicans perhaps more strongly than in 2017.”

“While polls taken after an election consistently show more support for winners than they received in the actual election, this poll shows a 17-point margin for Northam in 2017 when he won the election by 9 points. Partisans vote for their candidate in large numbers — usually 90% or more. That happened in 2017, and the results of this poll reflect that. The Independents in this poll have “shifted” toward the Republicans, but they report voting for Northam in 2017 in greater numbers than the 2017 exit poll suggests. We continue to use that exit poll as our benchmark because it is the only/best benchmark available. It is easy to say that the electorate won’t be the same four years later; it is much more difficult to define precisely how it will differ. We chose not to substitute our judgment for the exit poll.”

Interviewing for The Roanoke College Poll was conducted by The Institute for Policy and Opinion Research at Roanoke College in Salem, Virginia, between September 12 and September 26, 2021. A total of 603 voters likely to vote in the gubernatorial election in Virginia were interviewed by random telephone calls to 412 respondents and 184 responses drawn from a proprietary online panel of Virginians. Telephone interviews were conducted in English and that sample was drawn from a list of registered voters compiled by L2 Political, a non-partisan provider. Participants were sampled from that list, which has phone numbers associated with approximately 72% of the registered voters in Virginia. The list included both landlines and cell phones. Cellphones constituted 45% of the completed phone interviews. The online panel of Virginians was facilitated by Lucid, LLC, a supplier of high-quality online respondents. Of the 381 panel participants, the 184 that were able to be matched to the L2 registered voter list were included in this study.

Likely voters were defined as registered to vote in Virginia and who are extremely likely or very likely to vote or have already voted in the November elections.

Questions answered by the entire sample of 603 residents are subject to a sampling error of plus or minus approximately 4.0% at the 95% level of confidence. This means that in 95 out of 100 samples like the one used here, the results obtained should be no more than 4.0% percentage points above or below the figure that would be obtained by interviewing all Virginia likely voters who have a home telephone or a cell phone. Where the results of subgroups are reported, the sampling error is higher.

Quotas were used for both the telephone mode and online mode to ensure that different age groups and regions of the Commonwealth were proportionately represented. The data were statistically weighted for gender, race, political party, and education. Weighting was done to match the modeled general and race demographics of the 2017 Virginia Gubernatorial Election. The margin of error was not adjusted to account for the design effect, 1.322, due to weighting; this would increase the margin of error to 4.59%.