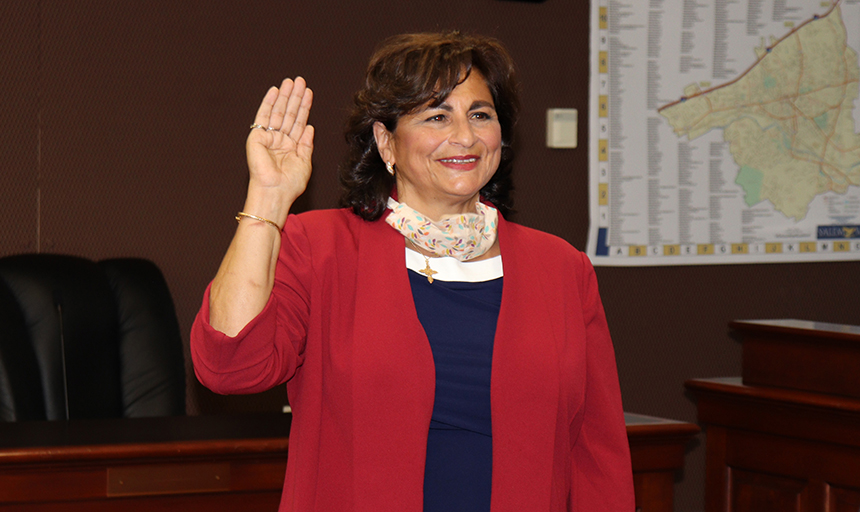 Renée Turk '77 gets sworn in as Salem's mayor on July 1. (City of Salem Photo)

She ran again, and in the process, made history.

Not only did Turk earn the most votes in this year’s City Council election, held May 19, but her fellow council members then elected her mayor. (In Salem, the mayor is selected by the council, from within their own ranks.) That made Turk the first woman mayor in the City of Salem’s 52-year history. She was sworn in on July 1.

“The perspective that I can bring is important,” Turk said. “The population of Salem is 53 percent female, so it’s important to have that kind of balance on any council or board.”

In addition to that perspective, Turk brings business experience, local knowledge and leadership skills to her new post. Turk grew up in the Roanoke Valley, attending Jefferson High School in the City of Roanoke before enrolling at Virginia Western Community College and eventually transferring to Roanoke College.

She remained in the Roanoke Valley afterward, using her degree to succeed in the business world and the education realm. She has taught business classes at Salem High School, and been employed as the general sales manager at Saturn of Roanoke Valley and as an account executive for Q99 radio. She retired from Wheeler Broadcasting in 2014.

She currently serves as an adult coordinator and music minister for the Diocese of Richmond's Discovery Youth Retreats, and she is the current president of the Waipani Homeowners Association.

In many ways, she said, her time at Roanoke College prepared her for success.

“My business education from Roanoke College is the foundation of my strength,” Turk said.

“My business education from Roanoke College is the foundation of my strength.”

As a decades-long resident of Salem, Turk said she has seen Roanoke College continue to be a “tremendous part” of Salem’s community.

“It’s our partner and our neighbor,” Turk said of the College. “It’s our great foundation for preparing business leaders to leave and go on their own. Hopefully, some of them settle in Salem, just like Bob Rotanz ‘78 did with Mac and Bob’s. There are a number of different Roanoke College graduates who have done some awesome things in the City of Salem.”

During her campaign, Turk said she wanted to find ways to help local business owners weather the storm of the COVID-19 pandemic. She also said she aims to make Salem’s government as transparent as possible.

The pandemic has made it harder for Turk to speak to Salem residents in person, but she has experience listening to constituents over the phone and through social media, having campaigned this spring by phone and online. In whatever form of listening she takes, Turk said she’s ready to hear from members of the community.

“My intent as a member of council is to listen, to explore, to learn, to observe, to talk to people, to build relationships and to be available for people so the citizens feel like they’re being heard,” she said.