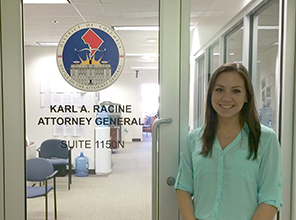 Roanoke College interns have very positive experiences preparing and presenting legal briefs, researching cases and drafting opinions on behalf of judges and attorneys. These experiences help to make the transition to law school a smooth one, since interns are directly involved for extended periods of time with practitioners of the law.