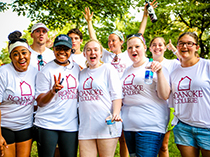 The impact of a gift positively affects Roanoke College students every day.

Established in 2015, the Presidents Society honors those individual donors who step forward as philanthropic leaders for Roanoke College.

Members play a vital role in ensuring that the College continues to thrive and grow each year. These individuals through their generosity, help to ensure the Roanoke margin of excellence, now and into the future. Presidents Society members include individual donors who have made cumulative outright and irrevocable gifts to the College $100,000 and more.