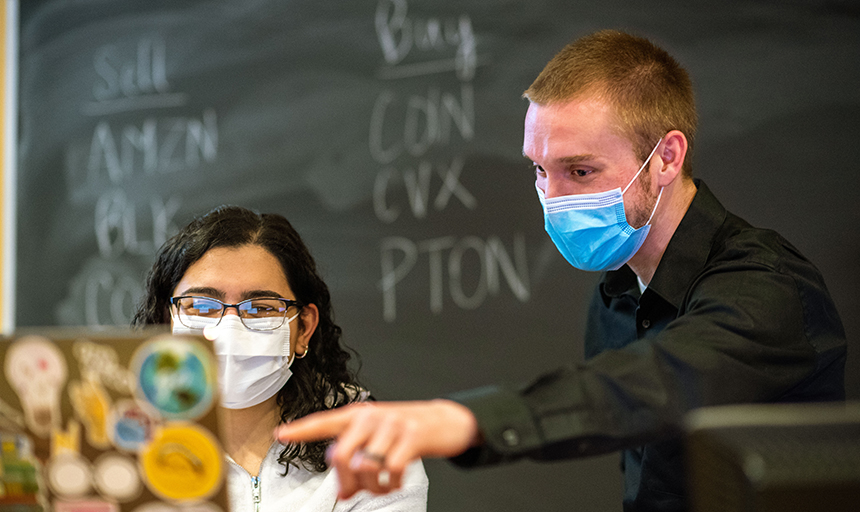 When Roanoke College’s business administration department began its Student Managed Fund — where students invested real money in the stock market — in 2004, it was on the cutting edge of getting students real-world experiences.

The business administration program has remained at the forefront of preparing students for the workforce. Starting in 2019, the Student Managed Fund has also included cryptoassets, which students have managed.

Dr. Tim Carpenter, assistant professor of business administration, said that very few schools, if any, in the country are doing this. He recently penned an article in this month’s edition of “Managerial Finance” titled “Implementing a student-managed cryptoasset fund in a finance curriculum” that details students’ experience trading cryptoassets and how it’s helped them.

“The introduction of cryptoassets to be traded by students at Roanoke College is another step in improving students' exposure to various markets and appears to further improve research and critical thinking skills,” Carpenter wrote.

Micah Spruill ‘11 donated $50,000 in cryptoassets to the College over the course of 2019 to be included in the Student Managed Fund. The value of those cryptoassets has risen as high as $720,000, Carpenter said, and currently sits around $400,000.

“It's going to become something that more and more standard financial firms are looking for,” Carpenter said. “Not necessarily as a specific job, but as somebody that's had exposure to it. They're starting to incorporate these things into the way that they operate. They need somebody that at least has heard of it before and can talk about it in an intelligent way.”

“(Financial firms are) starting to incorporate these things into the way that they operate. They need somebody that at least has heard of it before and can talk about it in an intelligent way.”

Avery Courts ‘22 is already finding that to be the case. Courts is a business administration major with a focus on finance, and she was the manager of the Student Managed Fund in the fall 2021 semester. During her current job search, she’s found that prospective employers are particularly interested in her experience working with cryptoassets.

“In my interviews, I found, I've done a couple where people have seen it on my resume, and they're like, ‘Oh, what is this? What do you mean by digital asset?’” Courts said. “And so, whereas it's not always sometimes a requirement of the job, it's something that makes you stand out and different from other interviewing candidates.”

Gabriele Di Gesu, who was an exchange student from Italy during the spring 2021 semester, participated in the Student Managed Fund as a student and helped manage the cryptoasset part of the portfolio. He developed both a passion and an aptitude for it.

At the end of the semester, Carpenter introduced Di Gesu to Spruill, and the two of them hit it off. A few weeks later, Spruill reached out to Di Gesu and said his firm, S2F Capital, was hiring. Di Gesu spent the summer in Atlanta interning at S2F Capital and at the end of the summer, he received a job offer. Now he works as a quant researcher for the firm, performing quantitative analysis for S2F while running a company of his own in Italy.

He praised the open-mindedness of Carpenter and Spruill.

“I think Dr. Carpenter is doing a great job at not being dismissive of this powerful development in financial technology,” Di Gesu said. “And Roanoke is very lucky to have an alumnus like Micah Spruill who shows that anything is possible in the world of crypto.”