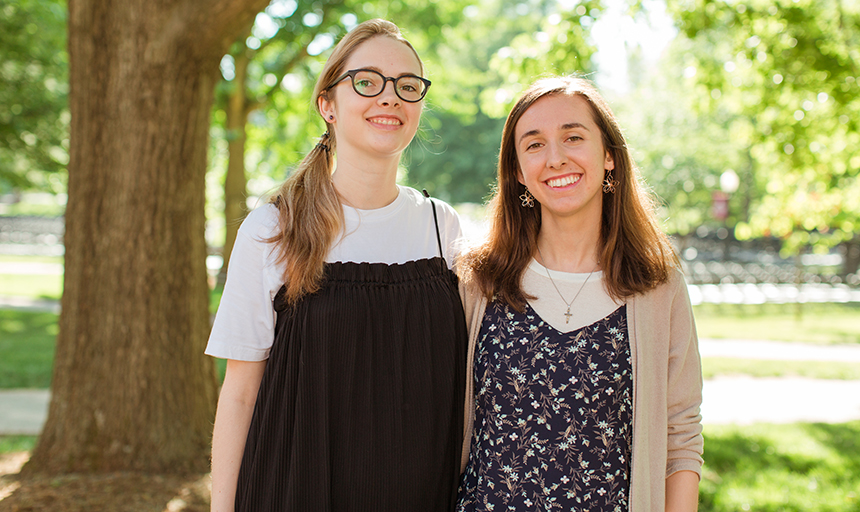 Two recent Roanoke College graduates, Carolyn Marciniec ’19 and Josie Dennis ’19, have been accepted to the Japan Exchange and Teaching Program, or JET.

JET is an initiative similar to the Fulbright English Teaching Assistantship but sponsored by the Japanese government to promote internationalization at the grassroots level by bringing young, college-educated individuals to work in communities throughout Japan.

Marciniec, a native of Salem, graduated with a major in literary studies and a minor in secondary education and a concentration in TESOL, or teaching English to speakers of other languages. Through JET, Marciniec will work with the Tokyo Metropolitan Board of Education.

“I knew about the JET Program when I was in middle school because my cousin taught English through JET in Miyagi, Japan,” says Marciniec. “The JET Program is my dream job; I get to teach English while at the same time practice Japanese and learn more about Japan.”

Dennis and Marciniec are Roanoke’s are just the third and fourth participants in the program in the College’s history. James Guthrie ’98 and Sarah Morris ’16 also participated in JET.

Dennis, from Richmond, graduated this spring with a major in international relations. Dennis studied abroad at Waseda University in Tokyo in 2017 and worked at the Japan – United States Friendship Commission in Washington, D.C., while participating in the Lutheran College Semester in fall 2018. Through JET, Dennis will work as a coordinator for international relations in either a school or business.

“Roanoke College gave me the opportunity to study Japanese with Kumazawa-sensei, to connect with students all across the globe by living in the international dorm, Chalmers, and really polish my public speaking skills in all my classes,” says Dennis. (note: sensei = teacher)

Dennis and Marciniec are Roanoke’s are just the third and fourth participants in the program in the College’s history. James Guthrie ’98 and Sarah Morris ’16 also participated in JET. Morris has renewed her contract with the program and is starting her third year in Japan as an international relations employee.