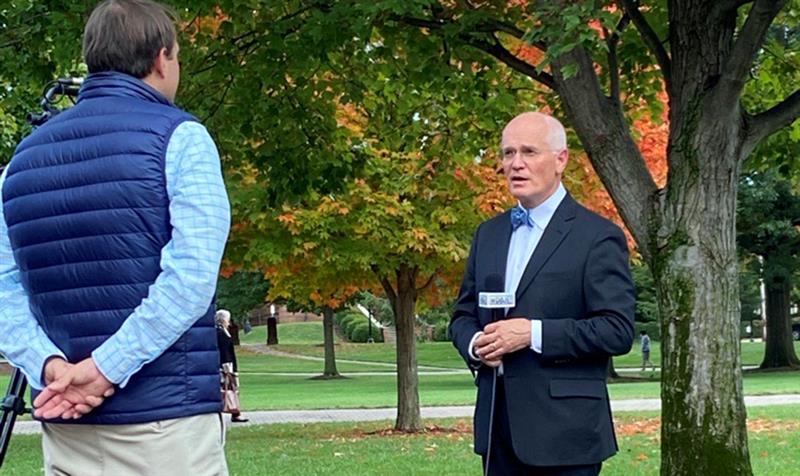 Roanoke College has seen major coverage from the new price reset to President Michael Maxey’s retirement announcement to the recent announcement about the $15 million gift from Shaun McConnon ‘66.

On Aug. 31, WXFR reported that Roanoke College made the Princeton Review’s prestigious list of ‘Best Colleges’.

WFXR, NBC12 and two articles from WSLS recount the stories of two alumni 20 years after the events of Sept. 11, 2001. Josh Mattox ’01 was working in the South Tower of the World Trade Center, and Stanley Meador ’96 was a first responder in Washington D.C. On Sept. 11, Roanoke honored the life of Steve “Jet” LaMantia ‘85, who worked in the North Tower, with a ceremony of remembrance.

Dr. Chad Morris, associate professor of anthropology, spoke to WDBJ7 in an article published on Sept. 13 about the haze in the Roanoke Valley from wildfires in the west.

Dr. Alice Kassens, the John S. Shannon professor of economics, co-authored the study, “Mental Health Crisis during the COVID-19 Pandemic”. The study, featured in the Richmond Magazine on Sept. 16, tells of the mental burdens found in a sampling of more than 2 million Americans.

On Sept. 17, The Roanoke Tribune featured Dr. Liz Ackley, the Brian H. Thornhill associate professor of health and human performance, and her involvement as director of the Center for Community Health Innovation. Her research has the opportunity to bring improvement to northwest Roanoke by bringing a shopping center to the community.

WDBJ7 reported on Sept. 21 that the College is implementing a price reset beginning in the Fall of 2022. The reduced published tuition cost will more accurately reflect the true price students pay.

Maxey announced his retirement, which on Sept. 21 was reported by the Roanoke Times and most other regional media outlets. Maxey has served as the College’s 11th president for 15 years.

Maxey discussed the price reset in a column published on Sept. 24 by the Richmond Times-Dispatch and on Sept. 30 by the Roanoke Times.

Dr. Michael Enz, associate professor of economics, was interviewed by WFXRTV about the possibilities of what would happen if there was a government shutdown in an article published Sept. 29.

Dr. Kassens spoke with WFXRTV on Oct. 13 about inflation and what people can do to lessen the impact.

The College, on Oct. 28, announced its single largest cash gift in school history by Shaun McConnon ’66. The $15 million donation will help fund the new Science Center. Making the front page of the Roanoke Times, the historic news also received regional TV coverage from WDBJ7 and WXFR 21/27. The gift was highlighted in Virginia Business magazine as well as Diverse Issues in Higher Education.

Wilson appeared on CBS News Online again on election night, on Fox News on Saturday, Oct. 30 and on NPR’s Here and Now on Monday, Nov. 1.