The Literary Studies program trains students to read critically, respond incisively, and write with discernment about the complex worlds depicted in a variety of texts and genres.  In addition to canonical works from the Anglo-American traditions, students are exposed to specific historical eras and geographical settings.  Thus, they explore familiar literary terrains as widely ranging as Hawthorne's New England or Virginia Woolf's London as well as unfamiliar worlds like Anita Desai's India or Ngugi wa Thiongo's Kenya.  In learning to critically read and understand layered works of literature, students exercise their powers of imagination and empathy; thus, they develop both intellectual and life skills.

What can I do with a major in Literary Studies?

In addition to preparing students for graduate work in literary studies or for careers in education, the Literary Studies major at Roanoke College thus trains students for work in any field in which clear communication and sharp analytical skills are in high demand, such as:

What is required for the major? 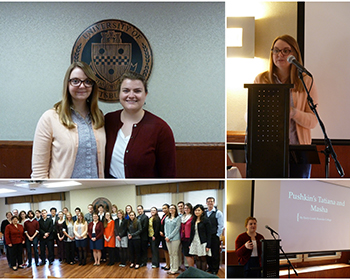 Literary Study majors Emily Gould '15 and Anna Merz-McConnell '15 were selected to present their research at the 2015 Europe: East and West Undergraduate Symposium at the University of Pittsburgh last spring.
Gould's piece was titled "Pushkin's Tatiana and Masha," and was an examination of women in Pushkin's prose. Merz-McConnell's paper, titled "Dickens and Dostoevsky Discuss Fathers," focused on father-types in Dickens' "Bleak House" and Dostoevsky's "Crime and Punishment."
Both traveled with Dr. Martha Kuchar, chair of the English department, and presented as part of the conference's Humanities section, which is one of the most competitive portions of the program.