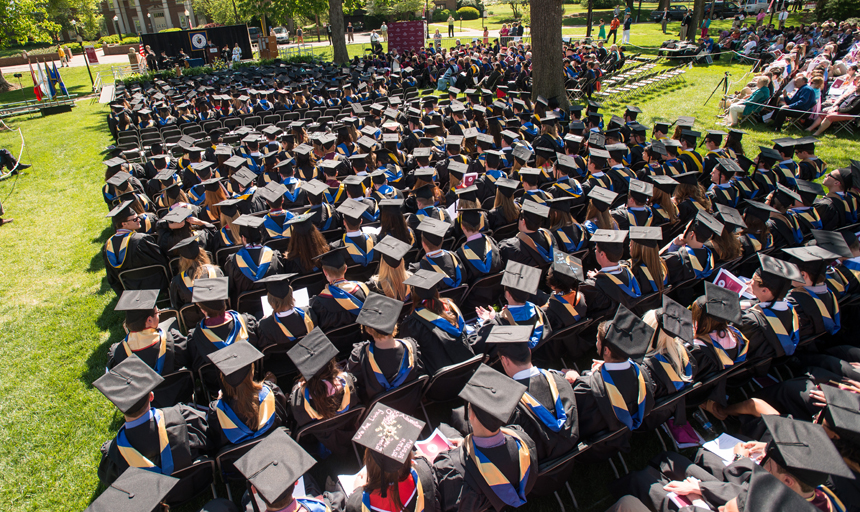 Roanoke ready for Commencement on May 4

Commencement exercises for the Roanoke College class of 2019 will be held on Saturday, May 4,  and includes 457 graduates. Roanoke will be highlighting student speakers from the Class of 2019 and elected not to have a conventional guest Commencement speaker this year. The ceremony will include remarks from President Mike Maxey and valedictory addresses by the three valedictorians.

Three graduates earned the honor of valedictorian – a record for Roanoke College. The valedictorians are: Cody Morgan Dillon-Owens, a psychology major from Roanoke; Matthew C. Johnson, a biochemistry major from Almond, New York; and William “Liam” Barrett Lambert, a mathematics and physics major from Staunton.

Two honorary degrees will be awarded during the ceremony. Morris M. Cregger Jr. ’64 and Sheila Cregger will each receive the honorary doctor of commerce degree.

Morris M. Cregger Jr. ’64 is the owner and CEO of Cregger Company, Inc., and of Cregger Capital Investments, Inc. Mr. Cregger is a native of Roanoke and attended Fork Union Military Academy before earning his bachelor’s degree in economics from Roanoke College, where he was an accomplished student-athlete. Mr. Cregger is a 1992 Roanoke College Distinguished Alumnus and joined the College’s Board of Trustees in 1999. He served as its chairman from 2011 until his recent retirement in April 2019.

The Creggers are charter members of the Presidents Society, as well as longtime members of the Society of 1842 and Associates Society. They provided the lead gift for the Morris M. Cregger Center, as they believe that students learn self-discipline and teamwork through athletics.

For all the Commencement details, schedules and more, visit roanoke.edu/commencement.

Below are highlights of Commencement week events.

For complete details on these and other events, please visit roanoke.edu/commencement.