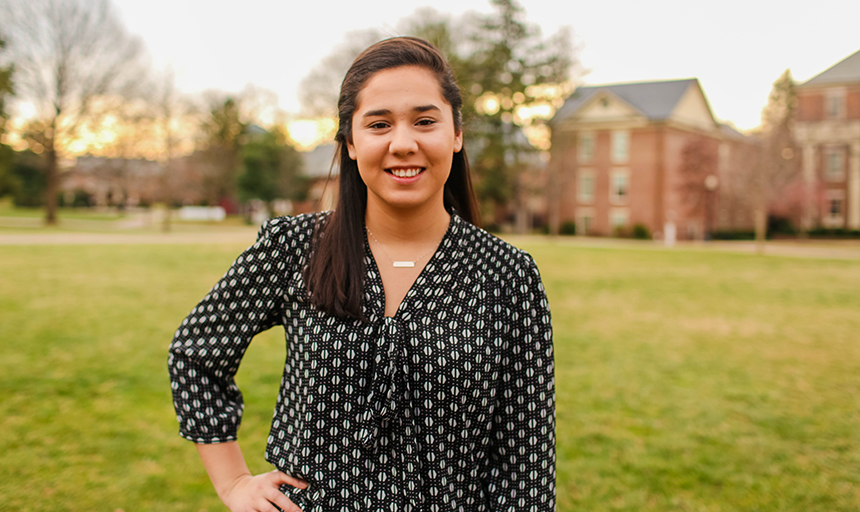 Edyth Cisneros '17 earned a Fulbright Student Award as an English Teaching Assistant (ETA) to Mexico. She'll be teaching English there for an academic year starting in September. She will begin in Mexico City and then move to her permanent ETA placement. Cisneros, from Roanoke, is a communications and Spanish major with a concentration in education.

Cisneros also will be working on a mini documentary series about the other side of immigration - those left behind. She has experience in both photography and videography and plans to do her own research for the documentary.

"I hope to create strong connections with the community I will be joining," Cisneros said, "and speak up for those who have been glossed over by the mainstream media."

Cisneros was born in California to Mexican parents. Her father's job brought the family to the Roanoke area and

Cisneros said her teachers in Roanoke held her to a high standard and encouraged her to do well. She was the valedictorian in 2013 at William Byrd High School.

"They instilled in me an urge to help others," Cisneros said. "My teachers always expected more of me and that eventually paid off when I graduated valedictorian."

“Professor Bañuelos Montes pushed me to step out of my comfort zone ... on a trip to Merida in the Yucatan ... I vividly remember the moment I jumped into a cenote 129 feet below ground near Chichen-Itza. That moment made me want more. I wanted to explore the entire cave and my ancestors. ”

At Roanoke College, Cisneros decided to major in communications and focus on her Spanish. She has been both a volunteer and an intern at La Conexión Va, a nonprofit news organization aimed at informing the Roanoke Valley Latino community. There she has taken on many roles such as a columnist, researcher, social media director, community outreach, food critic, and editor.

"Professor Bañuelos Montes pushed me to step out of my comfort zone," Cisneros said. "At one point, he sent me and two other students on a trip to Merida in the Yucatan. That trip solidified my obsession with my heritage and Mexico. I vividly remember the moment I jumped into a cenote 129 feet below ground near Chichen-Itza. That moment made me want more. I wanted to explore the entire cave and my ancestors."

She has been to Mexico several times but now has a greater appreciation for the history left to uncover.

"My love for Mexico and my people has never left me," she said.