Interviews are conducted through random-digit-dialing with both land lines and cell phones to better represent the Commonwealth. RDD samples are created by Marketing Systems Group. Elections survey samples may be drawn from a registered voter list from L2 Political. Quotas are used to ensure that different regions of the Commonwealth are proportionately represented, and the data are usually statistically weighted for key demographic characteristics such as gender, race, and age. As noted, some surveys are also weighted for political party. Consumer sentiment polls are weighted to reflect demographics from the U.S. Census in Virginia. Election polls are weighted to reflect Exit Poll results for the most recent appropriate election-Presidential, Gubernatorial/ statewide, or midterm. Polls taken several months prior to an election typically include all Virginia residents who are eligible to vote, while those taken closer to an election may screen for registered voters or for likely voters. Each IPOR poll press release has its own specific Methodology section.

IPOR is a charter member of the American Association for Public Opinion Research (AAPOR) Code of Professional Ethics and Practices. IPOR is non-partisan and non-ideological. Unless otherwise noted on a specific report or press release, IPOR surveys are funded as a community service by Roanoke College. 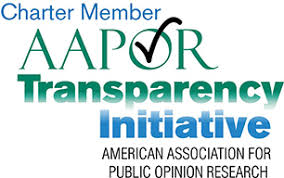